How Will Fish Fare in the Future? Assessing Vulnerability Across an Ecosystem

How Will Fish Fare in the Future? Assessing Vulnerability Across an Ecosystem

Fisheries in the Northeast—and the businesses that depend on them—want to know how fish will respond to climate change. A new methodology helps scientists and fisheries managers identify species' vulnerability across an ecosystem.

As the Atlantic Ocean warms, many marine species—including commercially important fish stocks—are moving further north along the Northeast United States. As a consequence, fishing boats based in traditional ports need to travel further to catch the same fish, or change their strategy to pursue different species of fish. In turn, businesses that serve fishing communities may need to purchase new equipment, develop new practices, or encourage workers to gain new skills. In order for fisheries and the businesses that depend on them to prepare for such changes, fisheries managers need tools to identify which fishery resources may be most vulnerable to our changing climate. 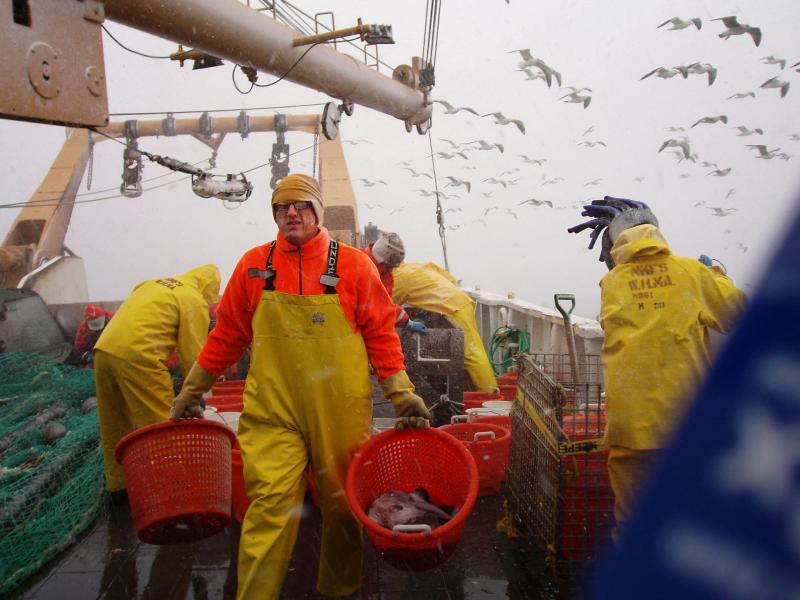 NOAA Fisheries scientist Jon Hare carries baskets of fish during the 2006 winter trawl survey on the Northeast U.S. continental shelf. This annual survey started in the 1960s and has been instrumental in documenting changes in fish distributions over the last four decades.

Dr. Jon Hare has spent 25 years researching the impacts of the environment on fish species. From his home base in Narragansett, Rhode Island, he spends several days per year on research cruises, trawling for fish and documenting the details of the catch. He records the species, number, size, and age of fishes as well as information such as the location, depth, and water temperature in which the fish were caught. For every day spent on a research cruise, Hare spends many more days in front of a computer, analyzing the data.

Hare’s careful research on the Atlantic croaker—a silver fish popular with recreational anglers offshore of the mid-Atlantic states—indicated that warming waters would decrease mortality among young croakers over time, leading to an increase in their numbers. A team of fisheries experts performed similar research to predict how climate change will affect cusk, a bottom fish that is caught incidentally in several New England fisheries. As cusk habitat is projected to decrease in response to warming ocean temperatures, the team determined that their numbers should decline over time in the study region.

Both of these studies provided solid scientific information about the future of a single species. However, to manage an entire ecosystem, fisheries communities need similar analyses for all the managed species.  As the study of a single species takes multiple years, and the region contains more than 50 managed species, it was unrealistic to think scientists could characterize the potential effect of climate change on all fisheries and protected species in the region. With so many species to study, the answers would come too late to inform management decisions that could boost the resilience of the most vulnerable species.

Expanding studies to develop a methodology

In order to provide the information fishery-dependent communities need, NOAA Fisheries organized a group of experts to consider more efficient ways to characterize the vulnerability of many species at the same time. Their goal was to come up with a method that would enable them to predict which species in an ecosystem would be most to least vulnerable to climate change.

Based in part on lessons learned from the studies of individual species, and drawing upon expert opinions to look across multiple fish and invertebrate species, the group came up with a vulnerability assessment methodology for understanding how populations across the ecosystem might change in response to warming trends. To check its effectiveness, Hare implemented the methodology in his own research area. 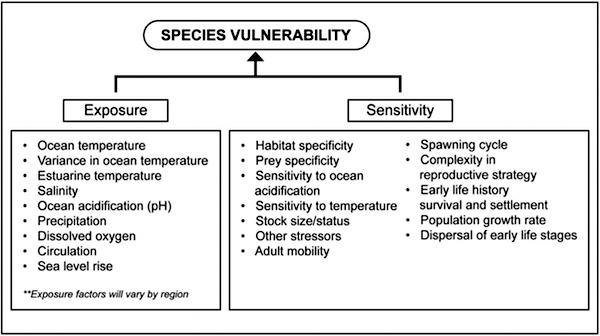 Species’ vulnerability is based on a combination of its sensitivity and exposure.

Two years into the study, scientific results now offer estimates of the relative vulnerability of 82 species of fish and invertebrate species in the Northeast U.S. continental shelf ecosystem. Fisheries scientists can access the information to help them identify species that might benefit from more in-depth research. Fisheries managers can also use the information to help them decide if current management of vulnerable species should be adjusted. Finally, fishermen in the region, and the businesses they work with, can check which species have relatively high vulnerability to environmental changes, and use that information to prepare for the future.