The impacts of reduced sea ice include severe coastal erosion, isolation for rural villages, and reduced habitat for wildlife. 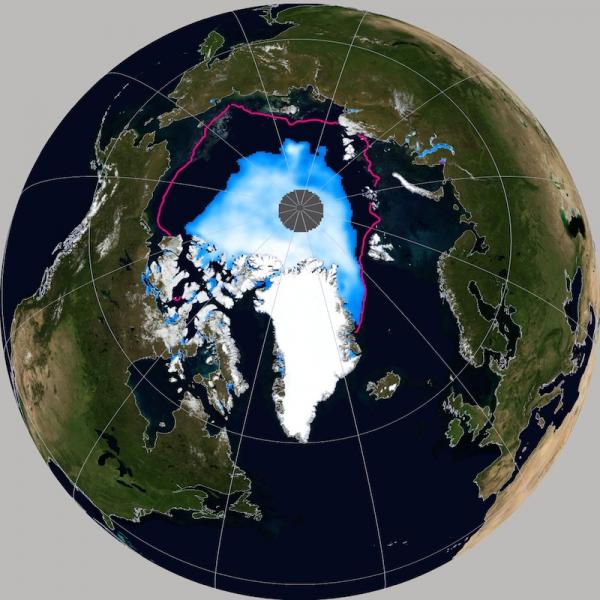 Arctic sea ice extent in September 2012 was the lowest in the satellite record (since 1979). The magenta line indicates the September average ice extent from 1981 to 2010.

The Arctic Ocean is blanketed by seasonal sea ice that expands during the frigid Arctic winter, reaching a maximum average extent each March. Sea ice retreats during the Northern Hemisphere's summer, reaching its minimum extent for the year every September. Arctic ice cover plays an important role in maintaining Earth’s temperature—the shiny white ice reflects light and the net heat that the ocean would otherwise absorb, keeping the Northern Hemisphere cool.

Arctic sea ice is declining at an increasing rate in all months of the year, with a stronger decline in summer months. Researchers who study climate and sea ice expect that, at some point, the Arctic Ocean will lose virtually all of its late summer ice cover. A robust range of evidence suggests that Arctic sea ice is declining due to climate warming related to the increased abundance of heat-trapping (greenhouse) gases in the atmosphere from human burning of coal, oil, and gas. Because greenhouse gases stay in the atmosphere for multiple decades, scientists do not expect any reversal in the downward trend in ice extent.

Despite year-to-year variations, satellite data show a decline of more than 13 percent per decade in September ice extent since the satellite record began in 1979. The satellite data are less comprehensive before 1979, but shipping records and other evidence show that the ice extent has been in a continued state of decline for at least the last one hundred years. Climate models have long predicted that summer sea ice would disappear as temperatures rose in the Arctic, but ice loss has occurred even faster than any models predicted. Researchers now expect that the Arctic Ocean will be virtually ice-free in summer well before the end of this century, perhaps as early as the 2030s.

Arctic amplification refers to the magnified warming in the Arctic relative to the rest of the globe—the rate of warming in the Arctic is nearly two times the global average. While a number of mechanisms contribute to Arctic amplification, the loss of Arctic sea ice cover plays a dominant role due to the reduction in the net albedo—a measure of how well a surface reflects incoming solar energy. 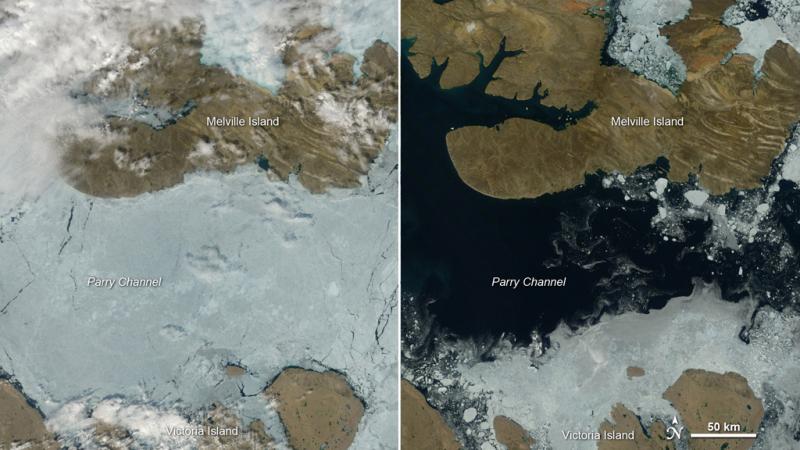 In 2012, the Parry Channel—a portion of the long-sought Northwest Passage—went from ice-choked on July 17 (left) to open water on August 3 (right). Sea ice reflects most of the sunlight energy that hits it back into space; open water can absorb heat energy from the sun.

White or light-colored sea ice is very reflective, so its albedo is higher than that of ocean water. With the huge increase in the area of ice-free water compared to a decade ago, the ocean can absorb much more heat than it used to. This, in turn, means that more heat energy is available to be released back into the atmosphere in autumn as sunlight wanes. As ice cover shrinks, areas of open water absorb heat that the ice would have reflected. The water warms up, and before ice can form again in the fall the ocean must release some of that heat to the atmosphere. Scientists are concerned that this increased heat transfer to the atmosphere could magnify future climate warming trends. 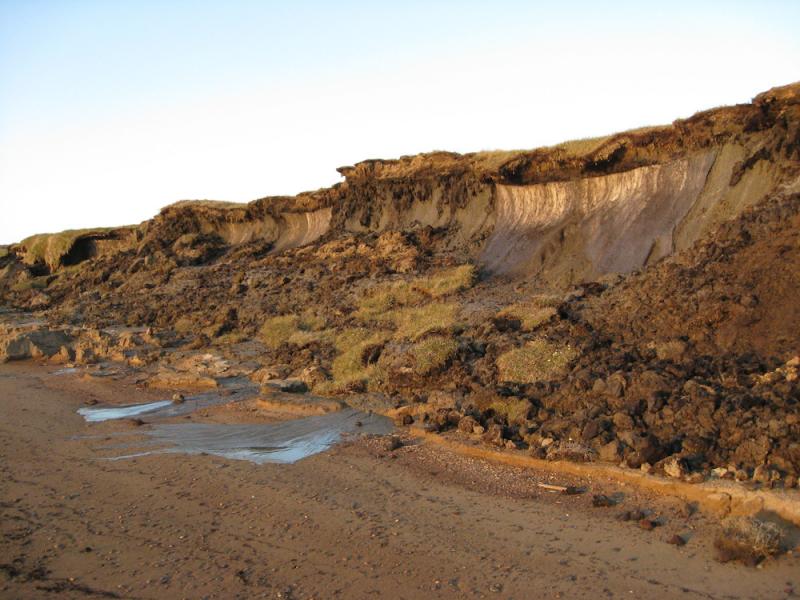 In some parts of the Arctic, the loss of sea ice exposes thawing permafrost on shorelines to the full force of wind and waves during fierce Arctic storms, resulting in rapid erosion.

The loss of sea ice in the Arctic also exposes shorelines to rapid coastal erosion. For most of the year, landfast sea ice has buffered Alaska's northern coastline from waves, winds, and currents. Current observations and future projections show that as sea ice melts earlier and forms later in the year, Arctic coasts will be more vulnerable to storm surge and wave energy. Particularly in the autumn, when large storms are occur in the region, land is exposed to shoreline erosion and terrestrial habitat loss.

Click this caption to open a time-lapse video of coastal change along Alaska's North Slope. The video captures action on the coast of Barter Island in Alaska over three summer months in 2014. Images show disappearance of pack ice and subsequent impact to the beach and cliffs from storms.

As human emissions of carbon dioxide from the burning of fossil fuels increase, the ocean absorbs more carbon dioxide, and the pH of its waters decrease, making the ocean more acidic. This phenomenon, called ocean acidification, gives the water a corrosive quality that interferes with the ability of key species of shellfish to grow their shells. Research shows that ocean acidification is already affecting northern waters. The polar ocean is particularly prone to acidification because of low temperature and low salt content, the latter resulting from the large freshwater input from melting sea ice and large rivers. The impacts on the food chain are not yet fully understood, but already some of the essential plankton and small invertebrates are showing physical changes. Ocean acidification may cause a loss of primary food sources for species that are physically, economically, and culturally essential (see Arctic Peoples and Ecosystems).