Long-term average temperature (green) compared to daily observations (blue) at Kotzebue, Alaska, for January 2013 through July 2015. The graph reveals the highly variable and often extreme weather (especially in winter) that is common in Alaska and the Arctic.

Over the past 60 years, Alaska has warmed more than twice as rapidly as the rest of the United States. Though the state experiences substantial year-to-year and regional variability, state-wide average annual air temperature has increased by 3°F, and average winter temperatures have risen by 6°F. Because of the rapid warming observed across the state, climate change impacts on Alaska are already pronounced; they include earlier spring snowmelt, reduced sea ice, widespread glacier retreat, warmer permafrost, drier landscapes, and more extensive insect outbreaks and wildfire.

If global emissions continue to increase through this century, climate scientists project that average temperatures in Alaska will rise up to 12°F in the north, 10°F in the interior, and 8°F in the rest of the state. Even with substantial reductions in emissions, climate models project that average temperatures across the state will warm by at least 5°F by the end of the century. 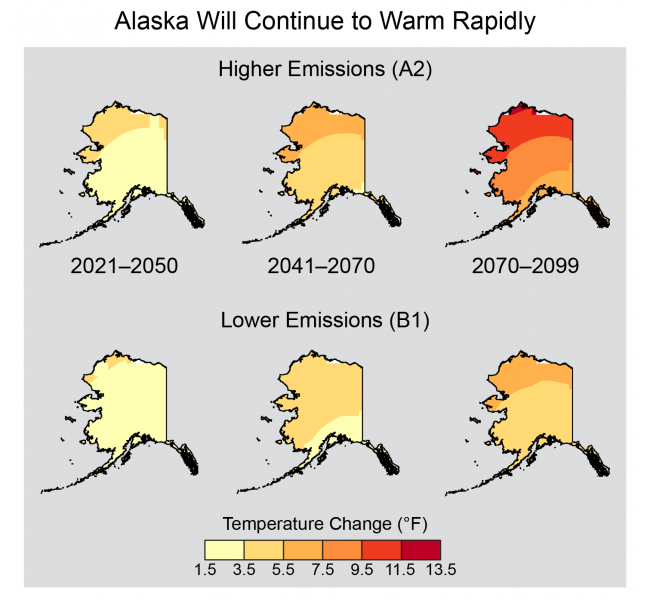 Average annual precipitation is also projected to increase, especially in northwestern Alaska, as part of the broad pattern of increases projected for high northern latitudes. If global emissions continue their current trend, annual precipitation is projected to increase by 15 to 30 percent by late this century. All models project increases in precipitation for all four seasons. However, increases in evaporation due to higher air temperatures and longer growing seasons are also expected, and these may reduce water availability across large portions of the state.

The length of the growing season in interior Alaska has increased 45 percent over the average length of the growing season in the last century, and climate scientists expect this trend to continue. Longer growing seasons could improve conditions for agriculture where moisture is adequate. Additional potential consequences of climate change in Alaska include a decrease in available water, an increase in the risk of extensive wildfires, and increased insect outbreaks. 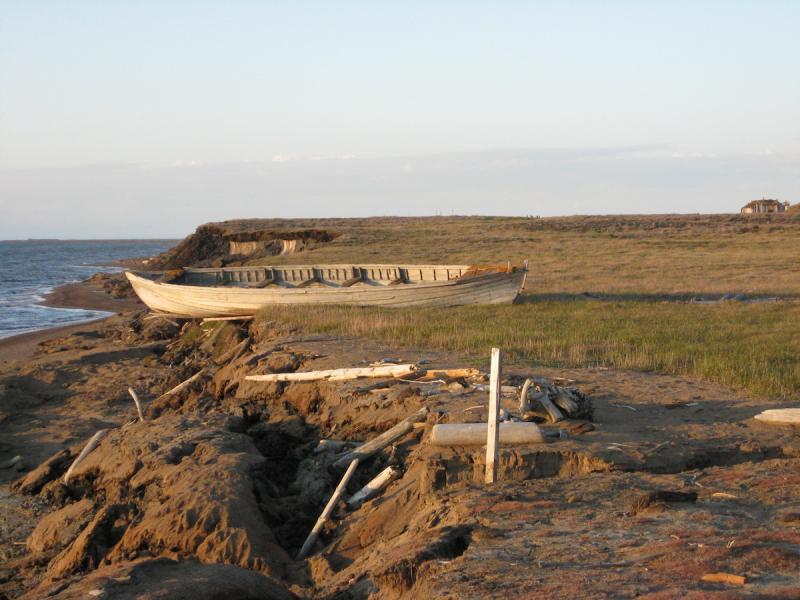 In July 2007, this nearly century-old whaling boat was perched on an eroding bluff along the coast of the Beaufort Sea near Lonely, Alaska. Just a few months later, the boat washed away to sea in a storm.

In addition to its 6,600 miles of coast, Alaska has thousands of miles of riverbanks that are prone to flooding during extreme storms and the annual spring thaw. The shorelines and riverbanks serve as home to over 200 Alaska Native Villages, many of whose inhabitants hunt and fish for subsistence. These villages are particularly vulnerable to erosion and flooding impacts resulting from extreme storm events, especially those in areas that do not have the ability or resources to quickly respond or rebuild after disasters.

Storm-driven flooding and erosion cause millions of dollars of property damage in Alaska Native Villages, damaging or destroying homes, public buildings, and airport runways. Because these villages are often in remote areas not accessible by roads, airport runways are lifelines for their residents. Storms that cause flooding and erosion to runways can be serious threats to villages’ survival.