Rising temperatures are changing processes that control the buildup and melt of snowpack, the growth or decline of glaciers, and the timing and quantity of streamflow in the Arctic. 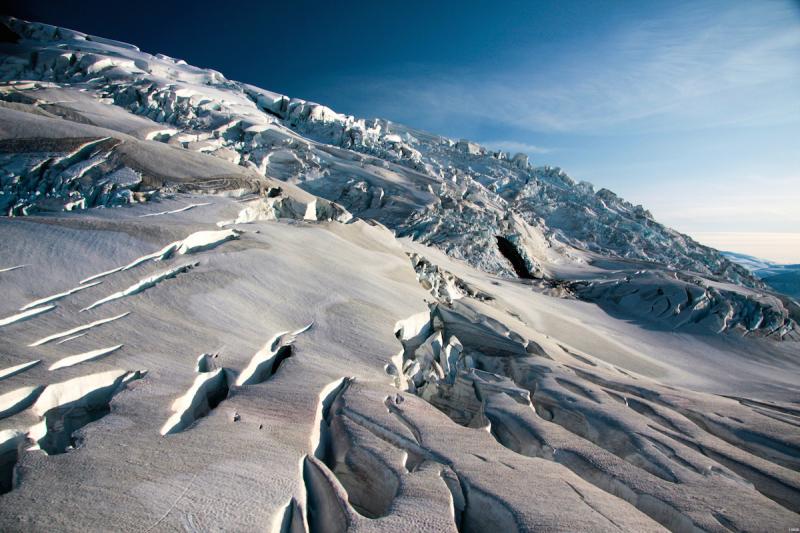 When scientists mapped this glacier in the 1950s, it was white, flat, and hundreds of meters thick. In this 2010 photograph, bedrock is emerging as the glacier retreats.

Climate change is expected to affect where, when, and how much snow and ice occur on the landscape. Changes in temperature and precipitation—reflected in trends over many decades and in variability from seasons to decades—alter fundamental physical processes of the region. Such altered processes include the buildup and melt of snowpacks, the growth or decline of glaciers, and the timing and quantity of hydrologic processes, such as streamflow. The impact of climate change on snow and ice depends on what time frame is considered, how local weather and climate respond to hemispheric or global changes in temperature and precipitation, and, at finer scales, how these changes play out over the complex and rugged topography of the region. Some of these changes are intuitive, particularly for snowpack; however, the complex interaction between topography, elevation, and broad-scale weather patterns may lead to some unexpected dynamics for glaciers.

Climate change and its effects on snow, ice, and hydrology

Climate—the statistics of weather over time (usually 30 years or more)—can be considered as the combination of temperature, precipitation, wind, the nature of storms, atmospheric pressure, and other factors characteristic of a place. Climate also includes the interannual to decadal (and longer) variability in those characteristics and the regional to global mechanisms that cause it. However, the characteristic climate in Alaska and the Arctic is changing rapidly in ways that are explainable only by global climate change.  Projecting possible climate impacts on snow and ice processes requires understanding the mechanisms by which weather and climate affect snowpack, glaciers, and resulting streamflow.

In places where snow and ice were historically common, changes in climate can be expected to affect snowpack development, distribution, and melt as temperature increases and the timing and quantity of precipitation change. Increasing temperature impacts snowpack directly by affecting both the seasonal timing of snowmelt and the period of the year that is cool enough to promote snowpack accumulation.

On average, high-latitude snowmelt now occurs earlier in the spring. Snowcover returns later in the fall and covers a smaller area than in the past. Together, this loss of snowcover reduces terrestrial albedo (how well a surface reflects incoming solar energy), increases the amount of heat absorbed by the land, and contributes to high-latitude warming.

Glaciers are the result of a climate that consistently produces more snowfall during winter than can be melted in summer. The surplus of snow accumulates over decades to millennia and eventually compacts into ice. As the ice deepens, the glacier’s immense weight causes the ice to flow downhill until it reaches lower elevations, which are warmer and receive less snowfall, thus allowing the excess ice to melt. 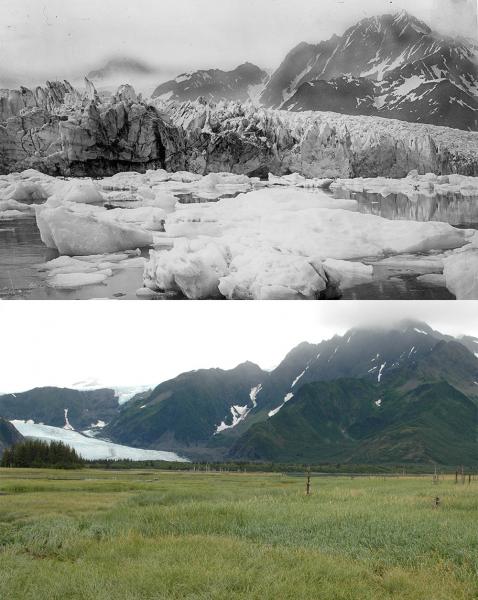 The top photo shows Pederson Glacier on the Kenai Peninsula of southeastern Alaska in 1917. The bottom photo, taken from the same vantage point, shows what was left of the glacier in 2005. Around the globe, total glacial mass has declined sharply, adding to sea level rise.

A glacier can maintain a constant size and shape if the net gain of snow in its upper accumulation zone perfectly offsets the net amount of ice lost in the lower ablation zone (melt zone). If the amount of melt exceeds the amount of snow accumulation, the mass budget of the glacier becomes negative and the glacier will shrink, adding that water to streamflow and, eventually, the oceans. The size of glaciers is thus inextricably linked to the relative amounts of snowfall and melt—two factors that are expected to change with a changing climate. Most high-latitude glaciers are shrinking and contributing more water to streamflow.

Collectively, the changes in snow and ice with climate change can be expected to have impacts on the hydrology of systems both within and downstream from mountains and glaciers. These hydrologic changes can in turn have significant impacts on—and be influenced by—terrestrial, riparian, and coastal ecosystems. Geology and geography, along with the physical and ecological changes in watersheds, affect the response of hydrography to climate change, so responses can vary significantly from watershed to watershed within a region. There are also strong ice-ocean-ecosystem linkages and feedbacks, including nutrient delivery and primary productivity, which have implications for fish and bird populations.