As the climate warms, portions of “permanently” frozen ground are beginning to thaw, changing how water interacts with the land and reducing the stability of soils beneath buildings, homes, and roads. 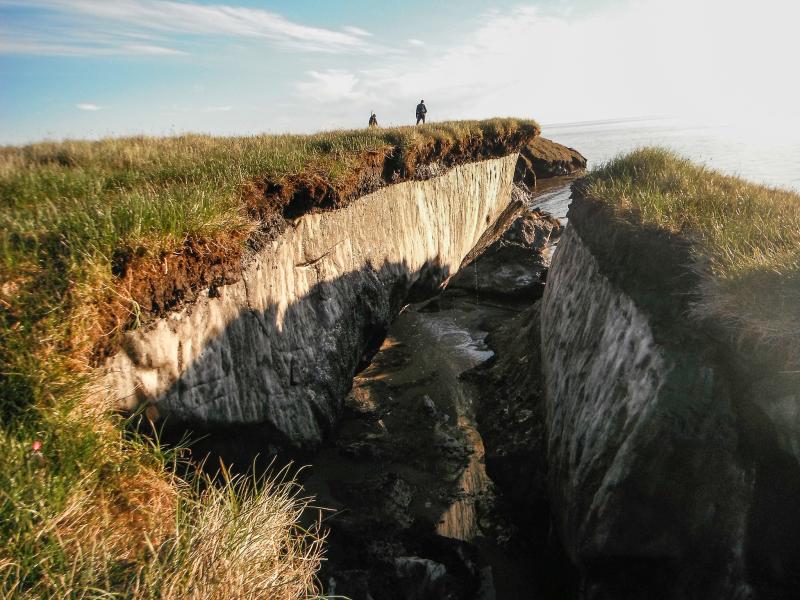 Permafrost (permanently frozen ground) in the Arctic is highly variable geographically because differences in climate, topography, and soil properties interact in different ways to affect its formation and persistence. As latitude increases, the likelihood of continuous permafrost also increases, while at lower latitudes (such as interior Alaska) areas of permafrost may have intervals or gaps.

In permafrost zones, summer thaw near the surface creates an “active layer” of thawed soil above the permanently frozen soil below. Below the active layer, the permanent ice that fills pore spaces between soil particles limits water infiltration. As climate warms, the season when the permafrost surface is active becomes longer and warmer, causing the active layer to become deeper or the entire permafrost layer to thaw. As this change lets water infiltrate deeper into the ground, hydrologic changes occur. These changes, in turn, affect the kinds of vegetation that can grow on the land's surface because different types of plants need different levels of soil moisture and depth to permafrost. 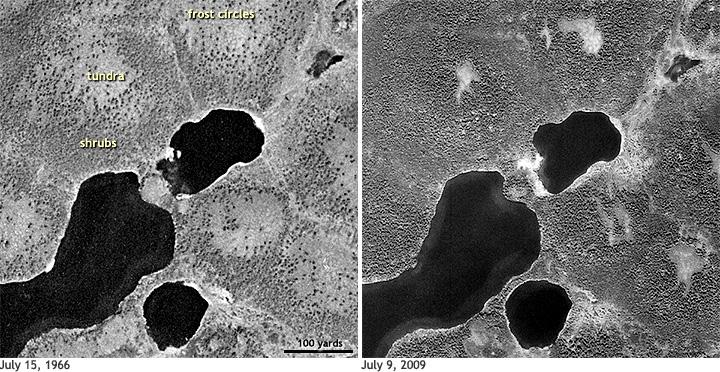 This satellite view of a site on the Siberian tundra near Russia's Yenisey River in 1966 (left) shows much more open tundra than a view of the same area in 2009 (right).

Changing permafrost can also contribute to the observed increase in the extent and severity of forest and tundra fires—deeper water drainage allows surface fuels to dry. Both wetland drying and the increased frequency of warm, dry summers have led to more large fires in the last ten years than in any decade since recordkeeping began in the 1940s. Wildfire can have mixed effects on habitat: it generally improves habitat for some species, but it reduces habitat for caribou because lichens, a key winter caribou habitat, require 50 to 100 years to recover after wildfire.

Landscape change in the Arctic under climate change is therefore a complex process. Interactions between permafrost, hydrology, vegetation, and disturbance are already occurring, but the nature and permanence of these changes varies from place to place with local factors, so the impacts vary considerably. In some coastal regions, the changes in permanently frozen ground interact with changes in sea ice and storminess to create novel conditions for dramatically increased rates of coastal erosion. In interior Alaska, effects of permafrost thaw can present challenges for infrastructure by reducing the stability of soils beneath buildings, homes, and roads (see also Arctic Development and Transport).