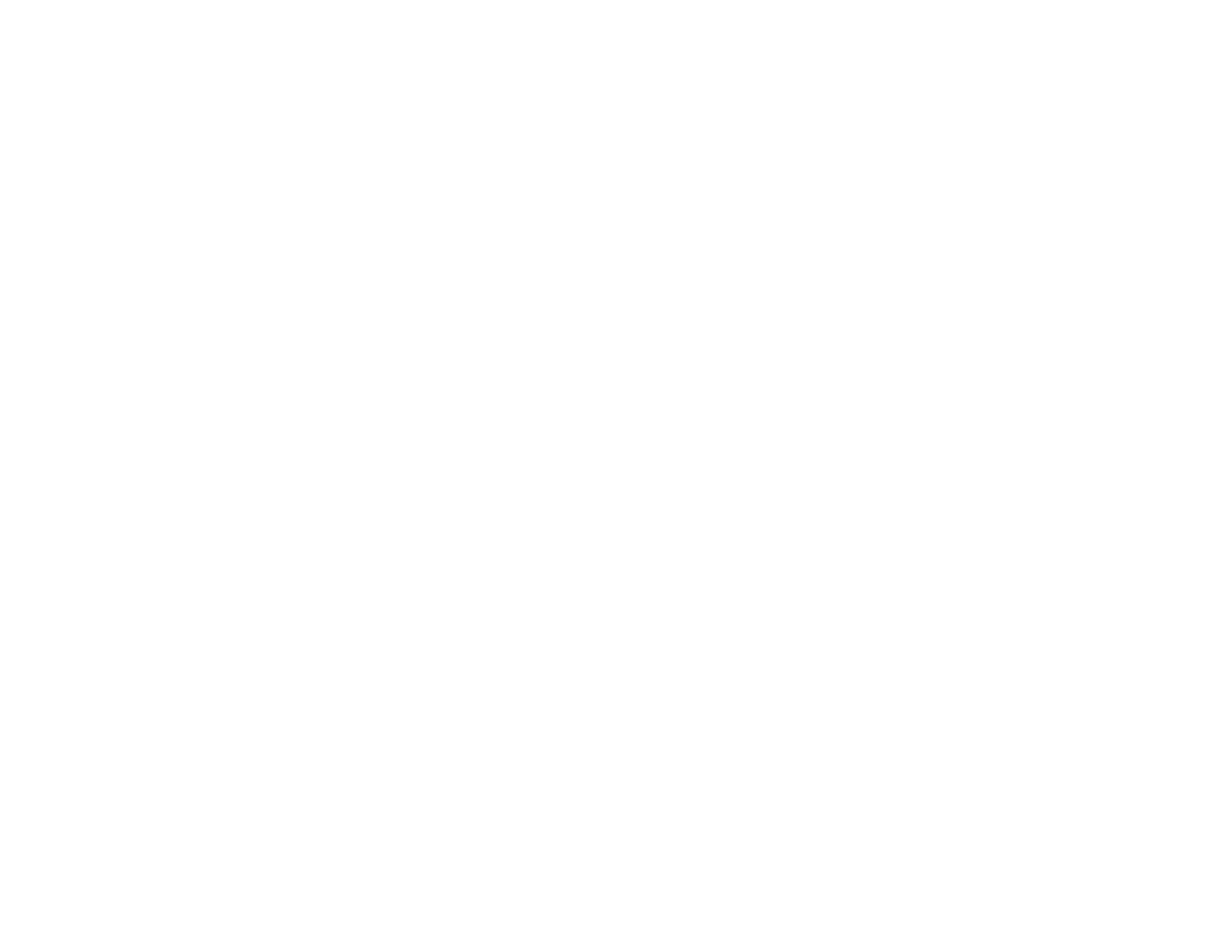 The territories of Puerto Rico and the U.S. Virgin Islands are dependent on their islands’ natural resources plus imported goods to support local populations and visitors. Puerto Rico's diverse economy includes tourism, manufacturing exported goods, and the service industry while the USVI economy is primarily supported by tourism.

More than 3.5 million people live in Puerto Rico, according to the U.S. Census Bureau. The territory saw many residents leave after hurricanes Irma and Maria devastated the territory in 2017. The island's population decreased by 11.8% between the 2010 and 2020 census and the U.S. Census Bureau estimates this downward trend to continue. The USVI’s 2020 census population was approximately 100,000, representing a decrease of 18.1%.

In Puerto Rico since 2005, the number of people living under the poverty level has increased, the economy has shrunk, utilities (water, electricity, and gas) have remained expensive and unreliable, labor market regulations have remained onerous, and the public sector has provided declining levels of service at a high cost to citizens. More than 40% of the population lives below the poverty line, and almost half of its residents are dependent on Medicaid for healthcare (New Fiscal Plan for Puerto Rico, 2018). These issues began before hurricanes Irma and Maria in 2017, and will continue to affect the island unless resolute fiscal and structural reforms are implemented. 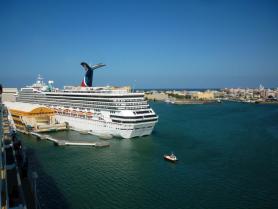 The territories of Puerto Rico and USVI are both groups of tropical islands in the Caribbean Sea. Both are dependent on their islands’ natural resources plus imported goods to support local populations and visitors. However, the two territories have distinct differences in terms of economic drivers. Puerto Rico, formally known as the Commonwealth of Puerto Rico, has a diverse economy. Key economic sectors include manufacturing—pharmaceuticals, textiles, petrochemicals, and electronics, most of which are exported—and the service industry, most notably finance, insurance, real estate, and tourism. Most of the businesses in Puerto Rico are owned and controlled by people and companies on the U.S. mainland.

Records from 2016 show approximately 3.7 million people visited Puerto Rico as tourists, and an additional 1.3 million people arrived via cruise ships. All together, these visitors spent more than $200 million in Puerto Rico. The numbers sound impressive, but tourism is much less important to the economy in Puerto Rico than it is in the U.S. Virgin Islands (USVI). Tourism is the primary economic driver in the USVI. More than half-a-million tourists and two million cruise ship passengers visit the territory each year. In 2013, tourists and cruise ship passengers together spent more than $1,200 million in the USVI. Service-related industries linked to the ocean and tourism account for more than 60% of the territory’s economy. 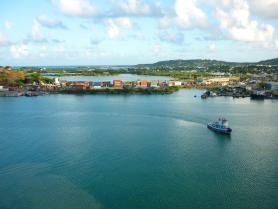 The regional economy depends heavily on day-to-day operations of port facilities and airports. These important elements of the region's infrastructure, located along shorelines or on coastal plains of the islands, are at risk from extreme weather and climate-related events. As global sea level continues rising, most of these locations will become even more vulnerable to storms, storm surge, and coastal inundation. As raw material for industries, food, clothes, and essential goods are shipped to the Caribbean from ports on the U.S. mainland, the islands’ economies are also tied to vulnerabilities of the ports where shipments originate. As Puerto Rico imports approximately 85% of the food consumed in the islands, the island’s food security is notably vulnerable to climate-related impacts on the supply chain. 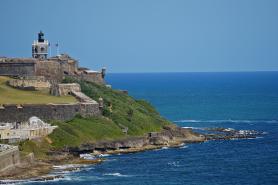 In the USVI, the Aklis and Great Pond archeological sites are directly threatened by sea level rise and storm surge. This is also true of the San Juan National Historic Site, also known as El Morro, which faces an additional threat from coastal erosion. Across the region, risks to natural resources include impaired access to coastal sites for fishing, degraded conditions of ecotourism attractions, and loss of public access to beaches.

Climate challenges to the built environment

Along the coasts, people, buildings, and economic activity are vulnerable to sea level rise, coastal flooding, and saltwater intrusion. And that includes private, commercial, governmental, and residential property and associated infrastructure. While locations at higher elevations on the region’s mountainous islands don’t have direct vulnerabilities to coastal impacts, buildings and infrastructure across the islands are vulnerable to heavy rainfall and high winds when tropical storms arrive. This fact was shown rather dramatically by Hurricanes Irma and Maria in 2017. For Puerto Rico, high resolution LIDAR maps show that an increase in sea level of 1.6 feet (0.5 m) would affect more than 8,000 structures in low-lying areas. A more dramatic sea level increase of 6.5 feet (2 m) would affect more than 50,000 structures in Puerto Rico. Damage, loss, or limited availability of these structures would have a negative effect on the economy by reducing the number of locations where locals and tourists could live, stay, or spend money. 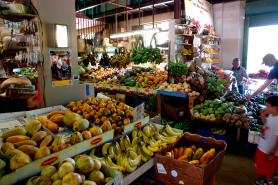 Most of the products from gardens and farms in the Caribbean are consumed locally rather than sold for export. Recent efforts to revitalize agricultural productivity in the region may be vulnerable to climate change. For instance, increases in average temperature and extreme heat events affect cattle ranchers and dairy farmers in the region by reducing availability of nutritional feed, increasing heat stress on animals, and increasing energy costs for cooling. Warming reduces the ability of dairy cattle to produce milk. High temperatures and heat stress also increase the proliferation and survival of parasites and disease pathogens. Many important tropical crop species—plantains, bananas, and coffee, for instance—evolved within relatively narrow temperature conditions. As a result, they are generally more sensitive to variation in rainfall and temperature than crop species native to temperate regions. Increasing agricultural production could improve the region's food security and economy. However, as climate change continues, precipitation and water availability is likely to decrease over much of the Caribbean. Exploring options that would increase the efficiency of water use and resilience to storms could benefit the agricultural sector in the region.

Most local catch is sold directly to local residents, markets, and restaurants, as well as through fishing associations. According to Puerto Rico’s Department of Natural and Environmental Resources (PR-DNER), the local catch accounts for only a small percentage of the seafood sold in these retail locations. Most restaurants and grocery stores and many seafood markets rely on imported fish because it provides them with a reliable, consistent, and less expensive source of supply (Describing the Ocean Economies 28-29). There are no recent data on recreational fishing in Puerto Rico, but the PR-DNER has indicated that it is an important component of the tourism and recreation sector (Describing the Ocean Economies 38). In 2014, estimates of the annual value of commercial fishing of reef fish were $9 million for Puerto Rico, $2.4 million for St. Thomas and St. John, and $3 million for St. Croix. Key fishery species in the region include spiny lobster, queen conch, snappers, and groupers. As in many tropical island systems, coral habitats anchor one end of the ridge-to-reef continuum—a concept that recognizes the linkage of social, ecological, terrestrial, and marine components associated with island systems. Continued climate change effects on marine habitats will likely impact island economies through the loss of revenues from marine tourism as well as changes in the availability of key fishery species. Fisheries productivity is projected to decline while catch effort increases as fishers travel longer distances and spend more time on the water. 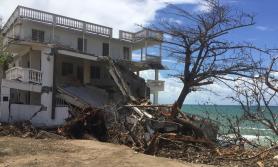 The Caribbean is highly vulnerable to climate-related events such as intense storms, extreme rainfall, and droughts. Current demographic and economic characteristics of the islands result in greater sensitivity to these events than at many places in the continental United States, so the area requires special considerations for response and recovery. Tropical cyclones (hurricanes and tropical storms), floods, and droughts are the most frequent and damaging extreme events in the region, with tropical cyclones causing the most severe disruption and economic damage. In Puerto Rico, more than 50 extreme events related to floods, droughts, tropical storms, and winter swells have been declared emergencies and disasters since the mid-1990s. In 2017, regional infrastructure for energy, water, transport, and communication essentially collapsed after damage caused by Hurricanes Irma and Maria.

For additional details on damages and recovery from the 2017 hurricanes, see the following reports issued through the Department of Homeland Security (DHS):

Alongside economic loss and infrastructure damage, the hurricane impacts also caused severe disturbances to terrestrial and marine ecosystems, including sensitive coral and seagrass habitats in the region.

Excerpted and adapted from NCA4 Chapter 20 and Describing the Ocean Economies of the U.S. Virgin Islands and Puerto Rico, a report prepared by Abt Associates for NOAA Office of Coastal Management.