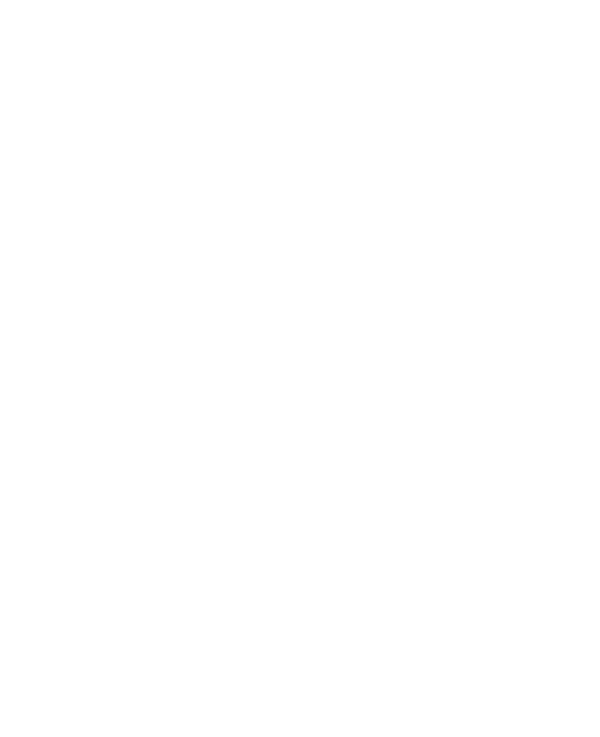 Flooding, warming temperatures, and precipitation variability are all growing challenges in the Northeast, and increase the vulnerability of the region's residents, infrastructure, and ecosystems. States and cities are starting to build resilience by incorporating climate change into their planning processes. 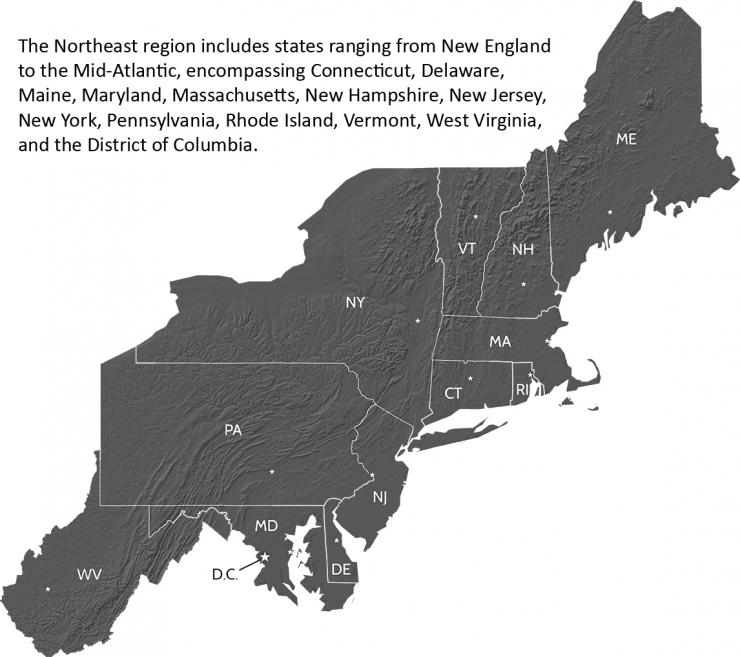 Sixty-four million people live in the Northeast, densely clustered in some of the most populated metropolitan areas of the United States, including New York City, Philadelphia, Washington, D.C., and Boston. Indeed, the high-density urban coastal corridor between Washington, D.C. and Boston is one of the most developed environments in the world. The region boasts one of the world's leading financial centers as well as the nation's capital, and it has a rich cultural history that predates early European settlement. 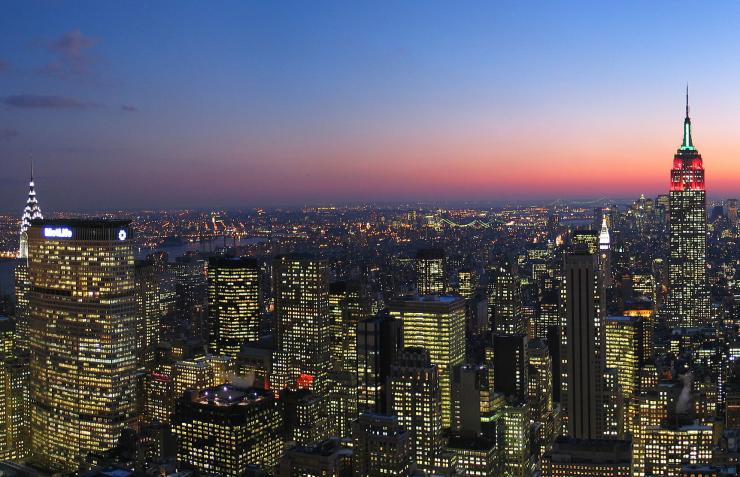 The skyline of New York City, looking south at dusk.

In contrast, the region also includes large expanses of sparsely populated but ecologically and agriculturally important areas. The regional landscape is dominated by forest, but it also includes grasslands and extensive marine and estuarine habitats—salt marshes, beach dune and barrier island systems, and fresh and brackish tidal marshes. The Northeast encompasses several major watersheds that empty into the Atlantic Ocean, and the North Atlantic Flyway and feeding grounds for the Right Whale and seabirds are strategic habitats identified as highest priority for conservation. 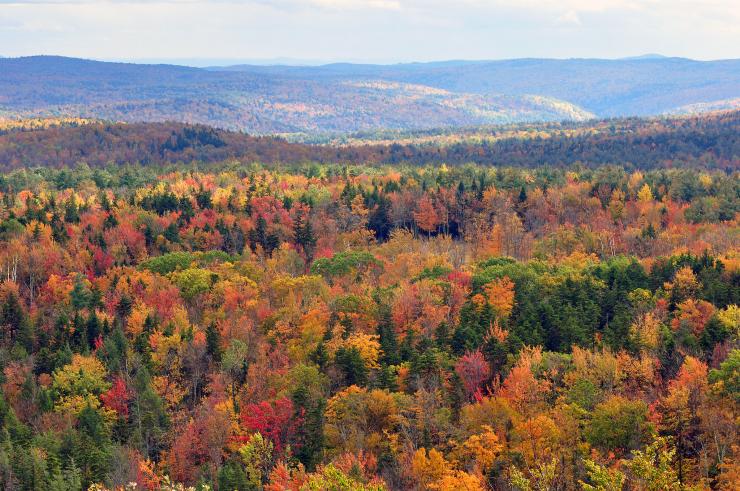 A region in the midst of change

Over the past three decades, there has been significant population movement in the Northeast towards the coastline. Working waterfronts are part of the economic engine driving coastal redevelopment. Some portions of the region have seen significant land cover changes such as increases in paved surfaces, and reductions and shifts in trees, forests, grasses, and wetlands.

A critical issue for the Northeast is addressing its aging infrastructure: roads, bridges, railroad lines, water and wastewater pipelines, culverts, and electrical power networks. The region has the oldest industry and building inventory in the United States, much of which was built along the coast and in estuaries—both of which are highly vulnerable to flooding.

The region's climate is also changing. Recent State of the Climate reports point out the likely impacts of a changing climate on both human and natural resources, which are threatened by rising temperatures, changing precipitation patterns, and a warming ocean, especially in the Gulf of Maine. The stretch of coastline from the tip of the Delmarva Peninsula in Virginia to the elbow of Cape Cod in Massachusetts is experiencing the greatest increase in sea level rise rate globally: 2 to 3.7 mm per year—more than three times the global average. 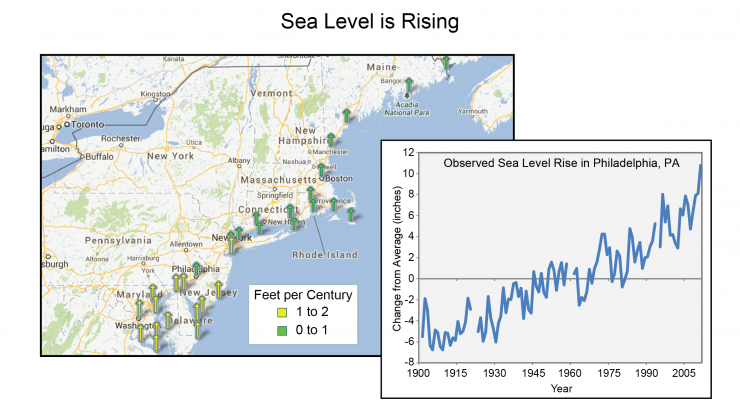 Temperatures in the Northeast rose by almost 2°F between 1895 and 2011, and models predict that the region could see a warming of 4.5°F to 10°F by the 2080s (assuming continued increasing emissions). Regional precipitation increased by approximately five inches, or more than 10 percent, during the same period. Seasonal drought risk in summer and fall is also projected to increase over the next century due to warming temperatures and earlier snowmelt.

The Northeast has seen a greater recent increase in extreme precipitation than any other region in the United States—the region experienced more than a 70 percent increase in the amount of precipitation falling in "very heavy events" (defined as the heaviest one percent of all daily events) between 1958 and 2010. The frequency of these heavy downpours is projected to continue to increase over the remainder of the century.

More frequent, intense, and longer heat waves are also projected to increase over the next century in the Northeast, which will affect the region's vulnerable populations as well as its infrastructure, agriculture, and ecosystems. Moderate and extreme heat events already pose a health risk, and climate change could increase this risk. Graphs below illustrate this risk via observed and projected impacts of excess heat on emergency room visits in Rhode Island.

This figure shows observed and projected impacts of excess heat on emergency room visits in Rhode Island via three graphs. On the left, maximum daily temperatures in the summer have trended upwards over the last 60 years. In the center, data shows that heat-related ER visits rose sharply as maximum daily temperatures climbed above 80°F. On the right, with continued climate change, Rhode Islanders could experience an additional 400 (6.8% more) heat-related ER visits each year by 2050 and up to an additional 1,500 (24.4% more) such visits each year by 2095 under the higher scenario (RCP8.5).

Federal agencies, through regional groups such as the New England Federal Partners and the Federal Climate Partners for the Mid-Atlantic, are addressing mounting threats on the prosperity and resilience of the Northeast by examining many sectors, including food and water security, infrastructure, and public health and safety.

To learn more about the impacts of climate change and variability and building climate resilience in the Northeast, visit these pages: