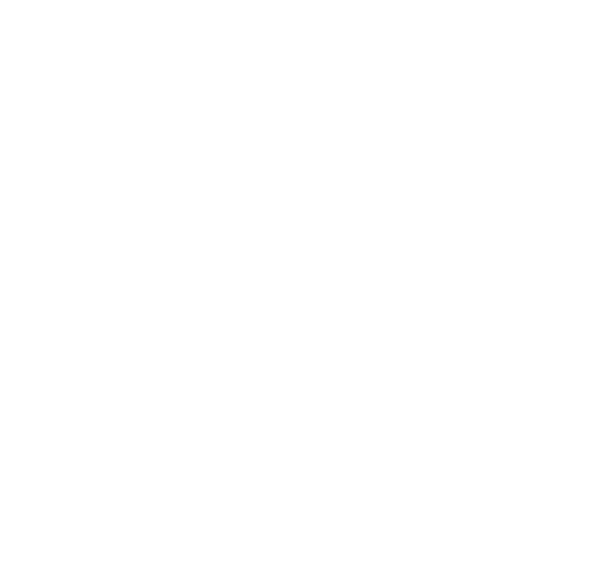 Climate-related hazards pose distinct threats to urban, rural, and coastal communities as well as natural ecosystems in the Southeast. Across the diverse landscapes and unique social situations of this region, people are beginning to recognize and confront their climate vulnerabilities and integrate climate adaptation into their planning processes.

The Southeast region of the United States boasts tremendous diversity across the natural environment and the people who live there. Bounded by the Gulf of Mexico and Atlantic Ocean, much of the region is a vast coastal plain lying below piedmont, elevated plateaus, and highlands. The region is home to important mountain ranges, including the Appalachians, Ozarks, and Alleghenies, as well as major rivers including the Mississippi, Ohio, Tennessee, and Savannah. 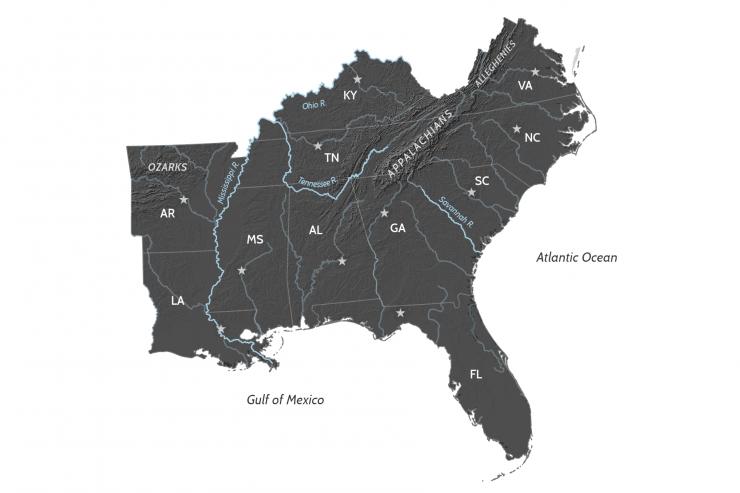 The Southeast has a rich cultural history tied to these landscapes, and the region continues to diversify and grow in population, particularly in cities and in the coastal zone. Both rural communities and high-growth urban areas contain pockets of severe poverty and deep-rooted inequality. The region is also home to a variety of ecosystems containing unique animal and plant communities with globally recognized biodiversity value, from coral reefs and coastal marshes to forests, swamps, and rolling grasslands in the interior.

Climate change will influence and disrupt both the social and natural systems in the region. Extreme weather events and long-term changes in climate are making hazards more frequent and/or intense, and physical hazards are compounded by existing stressors and inequities. Climate adaptation and resilience-building efforts can enhance the region's abilities to respond to climate changes. Though communities will face difficult decisions in a future shaped by climate change, climate adaptation offers opportunities to protect and preserve community assets and natural environments. 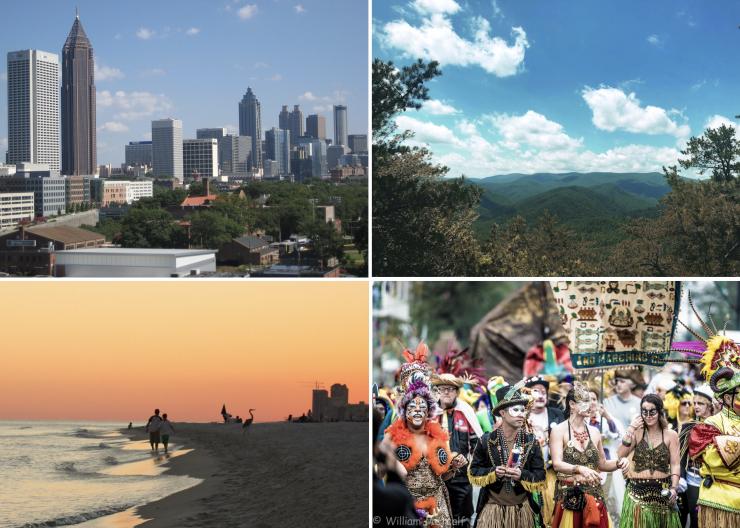 Major urban centers, rural locations, and tourist destinations support a diverse range of livelihoods across the Southeast. Click the montage for image credits.

Average temperature measured at stations across the Southeast Region from 1960 to 2020. Graph from NOAA National Centers for Environmental Information Climate at a Glance tool. Click the graph for a larger view.

Observations over the past 100 years have shown uneven warming across the Southeast, with an upward trend recently becoming apparent. The decade from 2010–2020 was the warmest on record for the region, and the Southeast is now experiencing a higher percentage of intensifying heat waves than any other part of the country (see Heat, Health, and Livelihoods in Rural Impacts; see Temperature, Humidity, and Heat Waves in Urban Impacts). 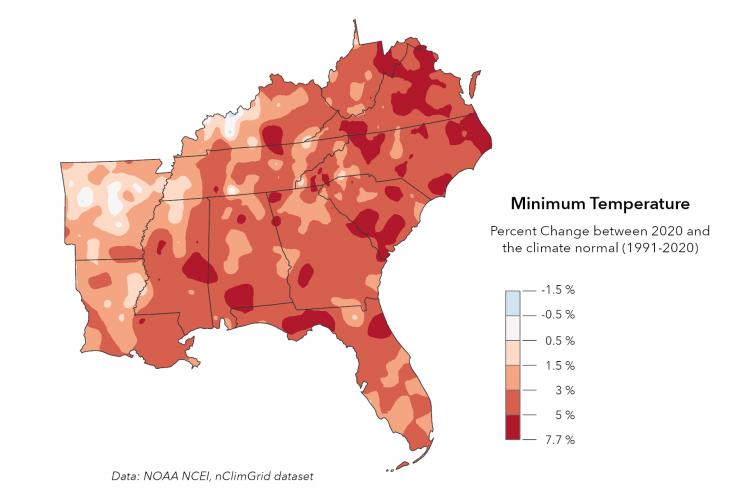 The Southeast generally receives a lot of rain, and total rainfall is increasing across most of the region. The number of heavy rain events has increased slightly in most areas, and this trend has accelerated in the most recent decades.

Across the Southeast, the number of days per year with heavy precipitation (shown by decade on the left) has generally increased since the 1900s. On the right, dots show individual station trends toward more (red) or less (blue) heavy precipitation from 1950 to 2016. Fourth National Climate Assessment, Figure 19.3.

Despite the increase in heavy rain events, the Southeast also experiences drought. Especially during strong La Niña years, the southern portion of the United States receives lower than average rainfall. In the early 2010s, much of the south received record low rainfall, which resulted in significant drought. 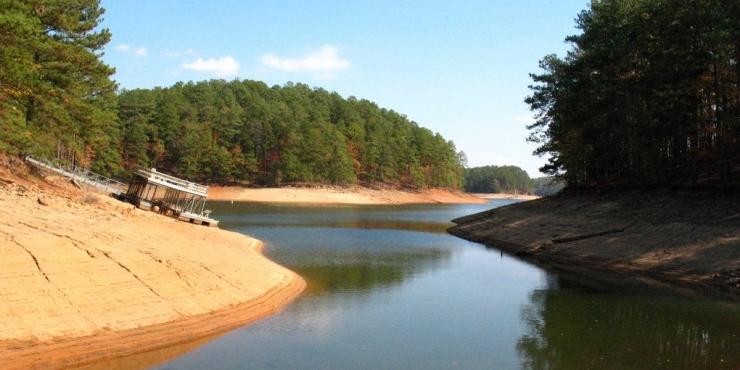 In fall of 2007, a dock and boat rest on dry land due to low water levels at Allatoona Lake—a source of Atlanta's water supply—in the northwestern part of Georgia. Regional drought dropped the lake level more more than 10 feet below normal. Click on the image for a larger view and credit.

Projections of future conditions from climate models suggest that temperature and rainfall will continue to change in the Southeast. Temperature will increase, resulting in more frequent and dangerous heatwaves and potentially leading to more severe droughts. Extreme rainfall events are generally likely to become more frequent and intense. Projections vary based on greenhouse gas emissions, with high greenhouse gas emissions over the next several decades resulting in bigger changes to temperature and rainfall. For example, if greenhouse gases continue increasing, summer temperatures above 95°F are projected to become very common by the end of this century. For additional information, see the Fourth National Climate Assessment, Chapter 19; Southeast. 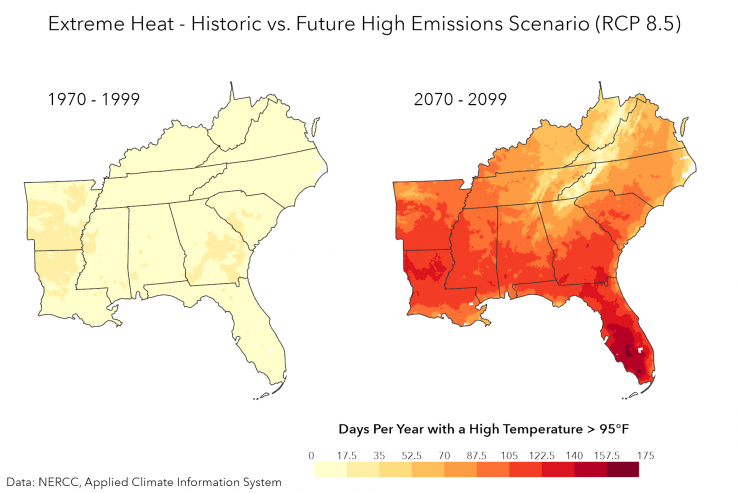 Climate models project a significant increase in the number of days over 95°F per year across the Southeast. Data from the Northeast Regional Climate Center Applied Climate Information System; 2079-2099 image shows the weighted mean of downscaled CMIP5 models in the LOCA dataset. Historic data from Livneh et al. (2015). Click the image for a larger view and credit information.

Throughout the Southeast, more people and the things they value will be exposed to extreme weather and climate-related hazards. People and property along the coast are facing climate stressors such as the accelerating rate of sea level rise. A growing number of people living in the Southeast alongside construction of new buildings in harm’s way will increase costs from climate-related hazards, resulting in a negative impact on well-being and important economic sectors such as agriculture and tourism. 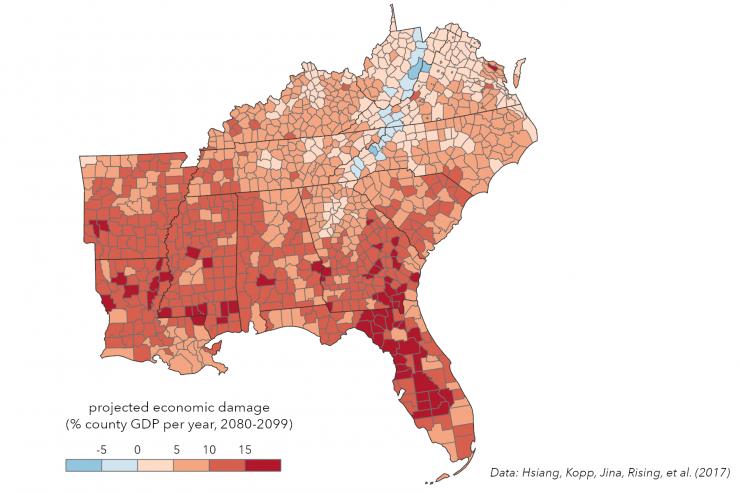 By the late 21st century, if emissions of heat-trapping gases continue increasing, most Southeast counties are projected to experience economic damages from climate change. Colors show annual economic damages projected for 2080–2099 under RCP8.5, expressed as a percentage of gross domestic product for each county in the Southeast. Data from Hsiang, Kopp, Jina, Rising, et al. (2017). Click on the image for a larger view and credit information.

Climate-related hazards across the region will continue to grow as a result of long-term trends that shift overall conditions or due to an increase in the severity or frequency of extreme events. The following list shows people, places, and things of value, collectively known as assets, paired with specific climate hazards that could impact them. This list represents some of the main climate-related concerns for the Southeast; damage that results from any one of these examples can lead to compounding and cascading events that disrupt social and economic processes.

Non-climate stressors such as persistent poverty can exacerbate climate-related hazards. For instance, health impacts from extreme heat and higher humidity can be magnified in housing without adequate air conditioning, exposing those without access to cooling to higher rates of heat-related illness. These non-climate stressors are often associated with economic factors such as lack of access to jobs and healthcare or demographic factors such as gender, race, and disability.

As of 2015, counties highlighted on these maps were facing persistent poverty. In other words, for the past 30 years (or more), at least 20 percent of the adults (left) or children under 18 (right) living in these counties had household incomes below the poverty line. Data from the USDA Economic Research Service. Click on the image for a larger view and credit information.

An example of a climate-related stressor that could impact agricultural productivity in the Southeast comes from dryland (rain-dependent) agriculture. This sector is particularly sensitive to drought due to the method of farming itself; more frequent or intense droughts could decrease yields or necessitate shifts in crop selection. Climate change will also affect the vulnerability and risk to animals, plants, and habitats across the region.

Federal agencies, states, counties, and municipalities across the Southeast are beginning to acknowledge and confront climate-related hazards that threaten their prosperity. To learn more about the impacts of climate change and variability on various sectors in the Southeast, and how people are working to build climate resilience, visit these pages: