The U.S. Caribbean territories of Puerto Rico and the U.S. Virgin Islands (USVI) are beautiful places—rich in biodiversity, cultural heritage, and natural resources. The impacts of climate change are threatening these unique ecosystems and putting local communities at risk.

The U.S. Caribbean territories of Puerto Rico and the U.S. Virgin Islands (USVI) are beautiful places rich in biodiversity, cultural heritage, and natural resources. The Commonwealth of Puerto Rico—Puerto Rico's formal name—includes the main island of Puerto Rico, Vieques, and Culebra, along with the smaller islands of Mona, Monito, and Desecheo. The combined population is nearly three and a half million people. The USVI includes the islands of St. Croix, St. Thomas, St. John, Water Island, and Hassel Island, as well as numerous smaller islands; this territory has a combined population of more than 100,000 people. In addition to the principal islands, the U.S. Caribbean includes more than 800 smaller islands and cays, diverse cultural and historical resources, and a rich array of marine and terrestrial ecosystems. All of the inhabitants depend on the region's natural resources and environmental services for their well-being, livelihoods, local economies, and cultural identities.

San Juan, PR features a dense urban city that converges with the coastline. These built assests are vulnerable to sea level rise, storm surge, and flooding.

Beaches are among the main tourist attractions, and they are exposed to sea level rise and erosion. In Puerto Rico, critical infrastructure such as drinking water and sewer pipelines and pump stations, wastewater treatment plants, and power plants are vulnerable to the effects of sea level rise, storm surge, and flooding. In the USVI, infrastructure and historical buildings are in the inundation zone for sea level rise. Exposed assets include the power plants on both St. Thomas and St. Croix; schools; housing communities; the towns of Charlotte Amalie, Christiansted, and Frederiksted; and pipelines for water and sewage. Critical cargo ports, ferries, and cruise-ship terminals are at risk from extreme weather and climate-related events and are also vulnerable to sea level rise. Main airports in San Juan, Puerto Rico and St. Thomas are also in the coastal zone.

In general, islands are more exposed to the impacts of climate change than mainland areas:

Differences from the mainland

Changing climate and weather patterns interacting with human activities are affecting land use, air quality, and resource management and are posing growing risks to food security, the economy, culture, and ecosystem services. Puerto Rico and the USVI share many vulnerabilities with coastal states and the Pacific Islands, yet they lack much of the adaptive capacity available to locations within the continental United States. The islands also have unique issues related to data availability and the capacity to develop datasets comparable to those available for the continental United States. For example, the small size of the islands, particularly the USVI, affects the availability and accuracy of downscaled climate data and projections. Additionally, differences in the availability of information and natural and social systems in the region affect the degree of vulnerability to climate change and extreme climate events. These differences are reflected in the needs, priorities, and approaches to reducing climate vulnerability between Puerto Rico and the USVI. 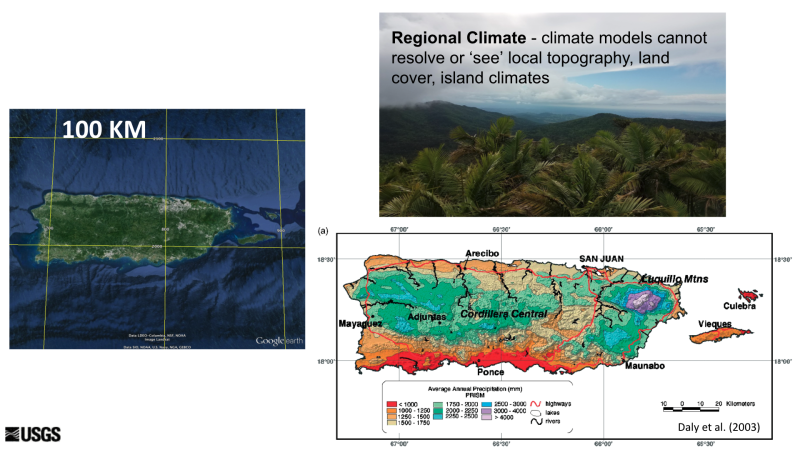 Historically, the U.S. Caribbean region has experienced relatively stable seasonal rainfall patterns, moderate annual temperature fluctuations, and a variety of extreme weather events, such as tropical storms, hurricanes, and drought. However, these patterns are changing and are projected to be increasingly variable as humans produce more heat-trapping gasses and they accumulate in the atmosphere. Having evolved within historic climate conditions, and given the small size and relatively isolated nature of these islands, Caribbean social, economic, and ecological systems are likely to be more sensitive to changes in temperature and precipitation than similar systems in the mainland United States.

The vulnerability of the U.S. Caribbean region to climate change is influenced by global, regional, and local factors. The region is sensitive to large-scale patterns of natural variability in both the Atlantic and Pacific tropical basins, such as the El Niño–Southern Oscillation and the Atlantic Multidecadal Oscillation. Climate variations due to these large-scale patterns directly impact the U.S. Caribbean because the islands largely rely on surface waters and consistent annual rainfall to meet freshwater demands. The high percentage of coastal areas relative to the total island land area means that a large proportion of the region's people, infrastructure, and economic activity are vulnerable to sea level rise, more frequent intense rainfall events and associated coastal flooding, and saltwater intrusion. As on islands worldwide, there are strong socioeconomic and cultural ties to diminishing marine resources and services, as well as economic dependence on tourism and imported goods.

From the vibrant colors and sounds of the island rainforest to the bustling streets of Old San Juan, this small island is packed with diverse natural and cultural resources.
[Open the image link to view a larger version of this image and a Spanish translation of the image caption.]

The people of the U.S. Caribbean rely heavily on imported food and other goods and services, leaving them critically exposed to climate-related disruptions in transportation systems, as well as vulnerabilities associated with source geographies. Crop species key to regional economies and food security—such as coffee, plantains, and mangoes—have evolved in narrower climatic niches relative to temperate crops and are often detrimentally affected by relatively small shifts in temperature, humidity, and rainfall. The limited geographic and economic scale of Caribbean islands means that disruptions from extreme climate-related events, such as droughts and hurricanes, can devastate large portions of local economies and cause widespread damage to crops, water supplies, infrastructure, and other critical resources and services.

The diverse natural resources of the islands are sensitive and often extremely vulnerable to natural and man-made hazards and are likely to become more vulnerable as climate change continues. Among the vulnerabilities and threats to the coastal zones of the islands are saltwater intrusion, flooding, and the increased frequency or intensity of tropical storms. In Puerto Rico and the USVI, poor coastal and shoreline management practices have resulted in the replacement of natural systems such as mangrove wetlands with hardened structures, altering sediment transport patterns and increasing coastal erosion in many areas. In Puerto Rico, poor maintenance of stormwater management systems has resulted in sedimentation and water quality issues that affect natural resources.

The local climate is tropical marine (warm and humid conditions), primarily influenced by the ocean, with annual average coastal temperatures of about 80°F (26 °C). Temperatures are generally coolest in January and warmest in August. Precipitation across Puerto Rico varies seasonally, with wetter summers and relatively drier winters. Trade winds blow predominantly from the east and northeast. The sea state for this region varies seasonally and is dominated by energetic tropical storms in the fall and large winter swells from November to April.

Climate trends and projections for the future

This figure, featured in the Caribbean chapter of the Fourth National Climate Assessment, illustrates the long-term (1971–2016) average annual number of days exceeding 90°F in Puerto Rico. The trend indicates that on average, people are now experiencing an additional half day per year above 90°F on the island.

To learn more about the impacts of climate change and variability and building climate resilience in the U.S. Caribbean, visit these pages:

This narrative is excerpted and adapted from the following reports:

Financial Oversight and Management Board for Puerto Rico, “Memorandum: Labor Reform as a Catalyst for Growth.” [Online]. Accessed December 28, 2021.

Government of Puerto Rico, “Transformation and Innovation in the Wave of Devastation: An Economic and Disaster Recovery Plan for Puerto Rico,” Aug. 2018. [Online] Accessed December 28, 2021.