Climate change presents evolving challenges to human and public health and to the distribution and diversity of living natural resources.

Climate change is an important and emerging threat to public health. In the U.S. Caribbean, the impacts of climate change include reductions in the quality and quantity of water, effects on food security, impacts on the ability to control and manage infectious disease, and reductions in natural protection from disasters.1

Climate change also presents evolving challenges to human health and to the distribution and diversity of living natural resources 2,3. These challenges have led to increased risk of exposure to airborne allergens and vector-borne diseases such as West Nile virus, malaria, dengue fever, and chikungunya in human populations, particularly in tropical coastal communities 4,5,6,7,8,9.

There is also concern that climate change can reintroduce diseases into geographic areas where they had been previously eradicated. 10 Changing patterns and frequency of prolonged heat episodes, ground level atmospheric ozone concentration or smog, and dust and other aerosols that trigger asthmatic responses are also conditions of concern 11.

Island nations such as Puerto Rico and the USVI are particularly vulnerable because of extreme events associated with changes in both terrestrial and marine weather. Addressing such hazards requires new geospatial and communication approaches to facilitate efforts from public health practitioners and emergency response planners. 12, 13 These strategies need to link human health, rapid and synoptic environmental monitoring, and improved forecasting of hazardous conditions that pose a risk to human population segments or other organisms.

Health-related risks to weather and climate

Heat waves are increasing in frequency, intensity, and duration, posing the threat of increased incidence of heat-related illness and death. Vulnerability to heat is conceptualized as a function of exposure to heat and the sensitivity of people. Several variables contribute to heat vulnerability with higher rates in those living alone, people with disabilities, those of advanced age, people with pre-existing health conditions, and people without health insurance. At the same time, the sensitivity of people to heat depends on a range of individual factors, which may influence adaptive capacity and the ability to cope with extreme temperatures.

A series of extreme temperature events was observed in Puerto Rico during the summers of 2012, 2013 and 2014, when the season with the most days exceeding 32.2°C, the hottest month on record, and the longest streaks of 32.2°C+ days occurred in the history of populated Puerto Rico. In San Juan, Puerto Rico, extreme heat episodes are associated with a significant increase in the effect of high temperatures on mortality during the summers of 2012 and 2013. Stroke and cardiovascular disease were the primary causes of death most associated with elevated summer temperatures in Puerto Rico.

During warm periods, energy is needed to cool buildings and indoor environments, and climate change is likely to increase this need. Energy demand in Puerto Rico correlates well with seasonal ambient temperature 14. The electric power system on the island was destroyed during the 2017 hurricane season.

Under the new reconstruction scenario, as temperature increases rapidly and extreme temperatures are more frequent, there will be a concurrent increase in demand for electricity for cooling. Unfortunately, the electric system is so fragile that it is unable to satisfy energy demands during the warm season (since Hurricane María, blackouts and energy shortages are common in Puerto Rico during the warm season).

Extreme events such as life-threatening hurricanes and tropical cyclones are the most immediate ways that people experience climate impacts throughout the Caribbean. Aside from the direct effects that hurricanes may have on the general population, there is a growing concern about the short-term and long-term effects on human health. In September 2017, Puerto Rico, USVI, and many other islands in the Caribbean experienced one of the most catastrophic hurricane seasons in recent history.

On September 7, 2017, Hurricane Irma (Category 5) reached the Lesser Antilles and the US Virgin Islands (USVI) and on September 13 it passed 60 nautical miles northeast of Puerto Rico. On September 20, 2017, Hurricane María (Category 4) made landfall on Puerto Rico. Many of the territories affected by these hurricanes, including Puerto Rico and the USVI, experienced major disruptions in essential services (e.g. potable water and electric power, telecommunications, transportation) and environmental health issues (e.g. water sanitation, contaminant exposure, vector-borne diseases, food hygiene, carbon monoxide poisoning, and exposure to mold). In the case of Puerto Rico, the island experienced higher than normal mortality due to Hurricane Maria. 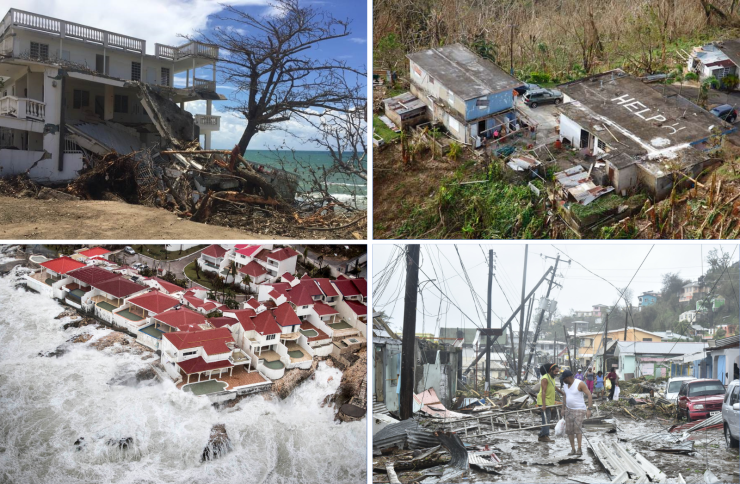 Impacts and damage from Hurricanes Maria and Irma. Click the image for a larger view and sources.

More frequent and intense hurricanes, combined with dire infrastructure and social determinants of health, will most likely generate interruption in medical care, a particular concern for sensitive groups, vulnerable communities, and disadvantaged communities. Traditionally underserved communities are systematically excluded from welfare, education, and other societal services and benefits that help sustain good health conditions. This has presented important challenges for these communities and for Public Health officials seeking to assist residents.

Water is essential for life. Water resources management is an important issue under Climate Change Scenarios due to the growing concern of water scarcity and water insecurity in the US Caribbean Region. Caribbean tropical islands rely on precipitation intensity and frequency for potable water availability. Main sources of potable water are surface water (reservoirs and streams), and groundwater and aquifers. Rainwater harvesting is a common source of potable water in some islands. Unfortunately, updated climate change scenarios suggest droughts will be more intense and frequent in the region, most likely increasing water shortages, a problem already faced by many underserved communities on islands. Extreme rainfall events are expected to occur as well, leading to large volumes of water in less time, which will lead to higher surface runoff and flooding in the insular Caribbean. For larger islands with complex topography, extreme rainfall events are likely to trigger soil erosion in watersheds and fill reservoirs with sediments, decreasing holding capacity.

Rainwater harvesting (RWH) systems offer societal benefits. These systems are recognized as sources for water supplies and a potential source of drinking water, but also in the framework of stormwater management, Domestic Rainwater Harvesting (DRWH) systems were recently recognized as source control solutions according to Low Impact Development (LID) principles. However, installing a water cistern in households is not a solution. These individual solutions promote inequalities and environmental injustice. The drought of 2013-2015 in Puerto Rico revealed the conflict between the agricultural sector, high income communities, industries, and underserved communities. These one-of-a-kind strategies are generating more stress to centralized water distribution systems (such as in the case of Puerto Rico) and emptying reservoirs faster than usual. Cisterns significantly increase water demands per household. Instead of holding the water in reservoirs (public infrastructure), each residential-commercial unit is requesting higher water volumes promoting inequalities for those vulnerable groups unable to install Cisterns. It is urgent to address the issue of water insecurity and the need to increase resilience to the climate crisis in relation to water supply.

Vector-borne diseases in the Caribbean are mostly transmitted by the mosquitoes Aedes aegypti, A. albopictus and A. culex. Researchers suggest that these mosquito species have excellent adaptation skills that will enable them to survive rising temperatures and extreme conditions.

Vector-borne diseases in the Caribbean are mostly transmitted by the mosquitoes Aedes aegypti, A. albopictus and A. culex. Many researchers suggest that both Aedes aegypti and Aedes albopictus have excellent adaptation skills that will enable them to survive rising temperatures and extreme conditions. At present, there is no effective vaccine or therapy to counter the symptoms of dengue, chikungunya and zika, all of which are transmitted by mosquitoes. Dengue is among the most common diseases of humans, with more than one-third of the world’s population at risk 15, 16. In Puerto Rico, large epidemics have recurred every 3–5 years (epidemics are defined as three or more suspected dengue infections reported per 1000 individuals for two consecutive weeks). Relationships between vector-borne infectious disease and the environmental conditions of a particular region are well documented. The environmental variables most associated with VBD transmissions are temperature, precipitation, relative humidity, and sea surface temperature.

Rising average temperatures can lead to: the expansion of the geographic range of many vectors; decreasing extrinsic incubation periods of many pathogens; and an increased rate of contact with prey, including humans, and mosquitoes (such as Aedes aegypti and Aedes albopictus). Johansson et al. (2009), Moore et al. [1] and Méndez-Lázaro et al. (2014) present evidence that the abundance and the transmission potential for VBD by Aedes aegypti in Puerto Rico are influenced by temperature and precipitation. The oceanographic and climatic conditions or the serotype profile are clearly not the only factors that define the temporal patterns or pathological ecology of dengue [64]. Other important factors include immunity and mobility of the population, socio-economic factors (inequality and poverty), public policy, implementation of surveillance systems, dengue control programs, and deficient septic tanks conditions, among others, also play a role.

Risks of SARS-CoV-2 (COVID-19), Previous Respiratory Viruses in the Caribbean, and Environmental Factors

The first reported COVID-19 cases in the Caribbean Region were recorded on March 2, 2020. The World Health Organization (WHO), on March 11, 2020, declared COVID-19 a global pandemic. 32 The first confirmed cases in Puerto Rico were diagnosed on March 13, 2020. There is speculation as to whether the COVID-19 outbreak is seasonal. 33 Previous research has found that SARS, MERS, and influenza transmission are often associated with seasonal variability and climate trends, but not all seasonal respiratory viruses exhibit the same patterns. 34,35 The question is whether COVID-19 is similar. 36, 37 Primary environmental factors that could influence respiratory viral transmission include air surface temperatures, relative humidity, and rainfall patterns. 38, 39, 40

A transmission route of this virus includes touching infected surfaces (skin-to-skin, touching infected inanimate objects) then mediating the virus infection through the mouth, nose, or eyes. 41, 42, 43, 44 Another transmission route is via the inhalation of small, exhaled respiratory air droplets (e.g. close contact within 1m) and aerosols (e.g. presence of microbes and particles <5μm in diameter that remain in the air for long periods of time, transmitted to others over distances greater than 1m) that seems to be especially effective in causing contagion. 41, 45 COVID-19 then increases the risk of mortality due to severe respiratory illness and cardiac injury. 46, 47

There is a question as to whether the health impacts of an interaction between the seasonal African dust outbreaks that occur annually in the Caribbean between May and August may have significant impacts on health and mortality due to the 2020 COVID-19 pandemic. Microorganisms in airborne particulate matter or dust can be linked to infectious diseases. 48,41,49 It is important to understand whether such stresses lead to weaknesses in the public that exacerbate the impact of COVID-19.

Sargassum algae mats have historically been present in the Caribbean Sea. Since 2011, massive amounts of pelagic Sargassum have washed ashore along island coastlines throughout the Caribbean Sea (e.g., Wang and Hu, 2017; Johns et al., 2020) from January to August. In Puerto Rico, the east and south coasts are more vulnerable and experience much higher volumes of stranded Sargassum throughout the year than the north coast. 50 The mats of free-floating Sargassum are usually several feet deep and cover thousands of square miles of the ocean. As these mats reach shore, they decompose and release hydrogen sulfide and ammonia gas, which affects tourists in coastal areas visiting Caribbean Islands. 51 Exposure to this environmental problem could be associated with various symptoms depending on the degree of exposure and concentrations of the degradation products in the air (e.g., ANSES, 2017; Fidai et al., 2020; Resiere, D., Mehdaoui, H., Dyer, H. et al. Covid-19 in the Caribbean: lessons learned from the ongoing international medical and scientific cooperation.52