As global sea level rises, the action of waves at higher elevations increases the likelihood for extensive coastal erosion. Already, coastal erosion costs roughly $500 million per year for coastal property loss, including damage to structures and loss of land.

Coastal erosion is the process by which local sea level rise, strong wave action, and coastal flooding wear down or carry away rocks, soils, and/or sands along the coast. All coastlines are affected by storms and other natural events that cause erosion; the combination of storm surge at high tide with additional effects from strong waves—conditions commonly associated with landfalling tropical storms—creates the most damaging conditions. The extent and severity of the problem is worsening with global sea level rise, but it differs in different parts of the country, so there is no one-size-fits-all solution. 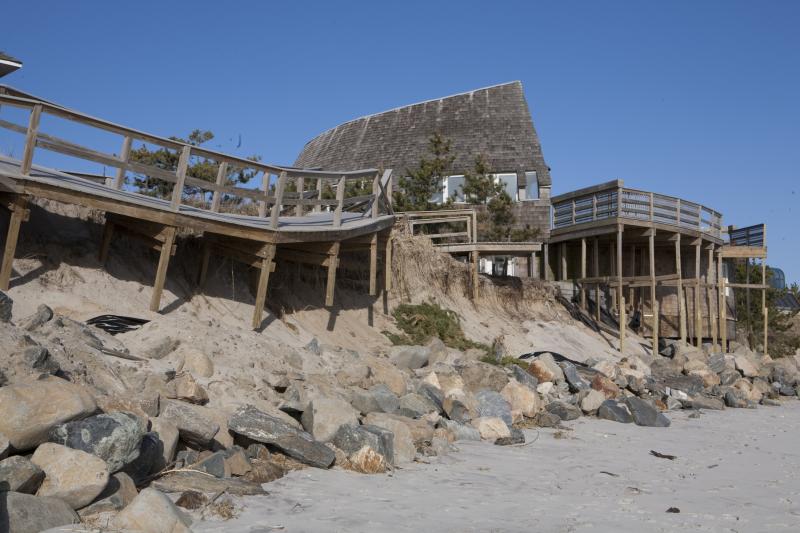 In the United States, coastal erosion is responsible for roughly $500 million per year in coastal property loss, including damage to structures and loss of land. To mitigate coastal erosion, the federal government spends an average of $150 million every year on beach nourishment and other shoreline erosion control measures.1 In addition to beach erosion, more than 80,000 acres of coastal wetlands are lost annually—the equivalent of seven football fields disappearing every hour of every day.2 The aggregate result is that the United States lost an area of wetlands larger than the state of Rhode Island between 1998 and 2009.3 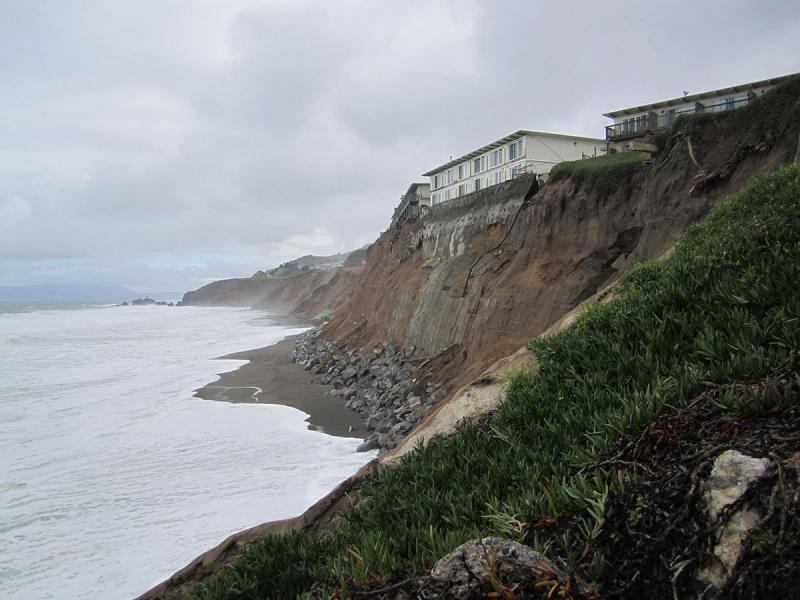 Cliff erosion is a common storm-induced hazard along the West Coast.

While coastal erosion affects all regions of the United States, erosion rates and potential impacts are highly localized. Average coastline recession rates of 25 feet per year are not uncommon on some barrier islands in the Southeast, and rates of 50 feet per year have occurred along the Great Lakes. Severe storms can remove wide beaches, along with substantial dunes, in a single event. In undeveloped areas, these high recession rates are not likely to cause significant concern, but in heavily populated locations, one or two feet of coastal erosion may be considered catastrophic.

Sea level rise will cause an increase in coastal erosion and the human response will be critical. If we choose to build hard structures in an attempt to keep the shoreline position stable, we will lose beach area due to scour. If we let the shoreline migrate naturally, we can expect to see erosion rates increase, especially in regions of the coast that are already dealing with starved sediment budgets and rapid shoreline migration. Increases in storm frequency and intensity in the future will also cause increased coastal erosion.

These photos show an area near Drew Point, along Alaska's northern coast. Taken on August 9, 2007, the photo on the left shows how ocean waves have undercut the land nearest the shore. Grassy turf extends out over a wave-cut notch. Taken on June 20, 2008, the photo on the right shows what often follows such undercutting: chunks of coastline tumbling into the sea.

In the past, protecting the coast often meant "hardening" the shoreline with structures such as seawalls, groins, rip-rap, and levees. As understanding of natural shoreline function improves, there is a growing acceptance that structural solutions may cause more problems than they solve.4 Structural projects interfere with natural water currents and prevent sand from shifting along coastlines. Additional reasons to avoid structural protective measures include the high costs to install and maintain them, state or local prohibitions against them, their propensity to cause erosion to adjacent beaches and dunes, and the unintended diversion of stormwater and waves onto other properties. 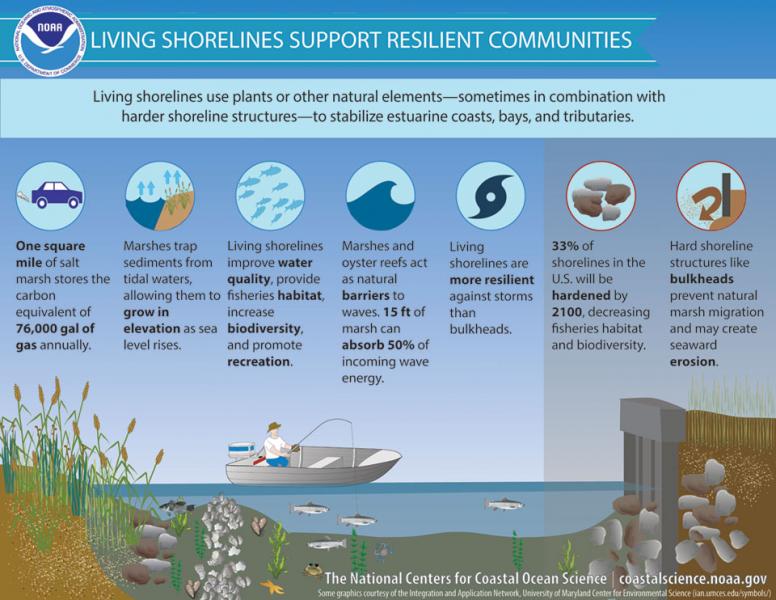 Many states have shifted toward non-structural shoreline stabilization techniques. Unlike structural projects, nature-based or "green infrastructure" protection measures enhance the natural ability of shorelines to absorb and dissipate storm energy without interfering with natural coastal processes.5

One common strategy for dealing with coastal erosion is beach nourishment—placing additional sand on a beach to serve as a buffer against erosion or to enhance the recreational value of the beach. However, beach nourishment has also become a controversial shore protection measure, in part because it has the potential to adversely impact a variety of natural resources. Consequently, these projects must comply with a wide range of complex laws and regulations. Beach nourishment is also expensive: check the Beach Nourishment Viewer to explore details about sand placement efforts for more than 2,000 beach nourishment projects since 1923. Adding sand to a beach does not guarantee that it will stay there. Some communities bring in huge volumes of sand repeatedly, only to see it wash out to sea in the next season's storms.

U.S. Army Corps of Engineers’ contractors pump sand dredged from the bottom of the Chesapeake Bay up to Norfolk, Virginia’s Ocean View Beach. The sand is part of a $34.5 million project to reduce storm damage risk to infrastructure along a 7.3 mile stretch of waterfront. When completed in 2017, the beach was 60 feet wide and sloped up to 5 feet above mean low water.

Recently, the U.S. Army Corps of Engineers has re-emphasized the need to consider a whole range of solutions to coastal erosion, not only structural solutions. For instance, non-structural shore protection methods that have the potential to control erosion include stabilizing dunes with fences and/or native vegetation, wetland protection and restoration, and relocation or removal of structures and debris.

Even with the implementation of coastal shoreline erosion and risk reduction measures, residual risk remains. Some areas are constantly in danger during severe storms. For some regions of the country, the more intense storms are predicted to increase in strength and frequency as climate continues to change, though the overall frequency of all storms may decrease. In some cases, the only way to prevent structures from causing harm may be to remove them entirely. After the structure has been removed, communities usually dedicate the land to public open space or transfer it to land trusts for protection.

Coastal restoration projects can be highly cost-effective for communities. Benefits of returning land to its undeveloped state include buffering storm surges, safeguarding coastal homes and businesses, sequestering carbon and other pollutants, creating nursery habitat for commercially and recreationally important fish species, and restoring open space and wildlife that support recreation, tourism, and the culture of coastal communities.