Inland flooding is a common result of landfalling coastal storms. Additionally, heavy precipitation events have increased across the nation, and these events can increase risks for inland flooding.

By definition, inland flooding doesn't occur on the coast, yet hazard specialists consider it with other coastal issues because it is often the result of landfalling coastal storms.

Inland floods can also occur after rain falls for many days in a row, as a result of brief periods of intense precipitation, when snowpack melts quickly, or when dams or levees fail. Whenever the volume of water on land overcomes the capacity of natural and built drainage systems to carry it away, inland flooding can result. 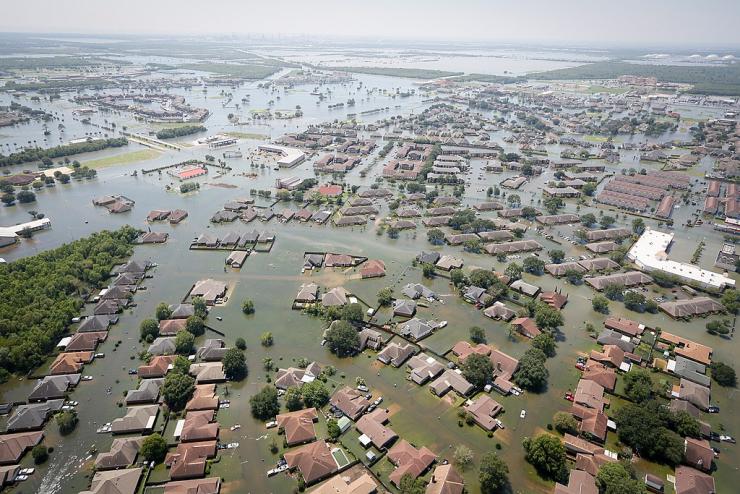 After landfalling storms wreak havoc at the coast, they can still produce widespread, torrential rains and floods as they move inland. As demonstrated by the impacts that accompanied Hurricane Harvey in 2017, tropical and extratropical cyclones can cause major flooding impacts inland from the coast. Over five days, rainfall amounts and observed flooding broke records across much of southeastern Texas.

Hurricane Harvey: How much water?

Back-to-back coastal storms also pose major risks for inland flooding. When a region has been soaked by one storm, and a second storm dumps more water onto saturated soils and already swollen rivers, it can lead to epic flooding. The severity of compound events—the coupling of storm surge, discharge from rivers, and heavy precipitation—has increased in many coastal cities.1 Over the coming decades, even if the frequency or intensity of coastal storms doesn't change as global average temperature increases, sea level rise will increase the frequency and extent of extreme flooding associated with coastal storms.1

Tropical and extra-tropical storms are not the only cause of inland flooding. In October of 2015, a stalled weather system directed intense rains across South Carolina over a four-day period, leading to record-breaking rainfall totals. All–time precipitation records were shattered across much of eastern and central South Carolina, with totals ranging from 10 to over 26 inches of rain over the four days. You can explore the details of the storm and the resulting flooding in a summary document prepared by the Carolinas Integrated Sciences & Assessments (CISA) at the University of South Carolina.

When they were built, many of the older coastal cities in the Southeast were built just above the current Mean Higher High Water (MHHW) level (the average height of the higher of the two daily high tides at a given location). Some of these cities used a gravity-driven drainage system to drain rainwater into the tidal estuaries. As local sea levels have risen over the last one hundred years, stormwater systems in these areas are no longer able to perform as designed. When these cities experience coastal flooding, tidewater enters the stormwater system, preventing rainwater from entering storm drains causing it to back up in the streets. In the future, the gravity-driven nature of many of these systems may cease to function as designed, causing rainwater to flood streets and neighborhoods until the tide lowers and water can drain normally. Cities such as Charleston, South Carolina and Miami, Florida have already begun to improve stormwater infrastructure and explore natural and nature-based infrastructure design to reduce future flood risk.

The growing number of extreme rainfall events is stressing the deteriorating infrastructure in the Southeast. Many transportation and storm water systems have not been designed to withstand these events. The combined effects of rising numbers of high tide floods and extreme rainfall events, along with deteriorating stormwater infrastructure, are increasing the frequency and magnitude of coastal and lowland flood events.

This section is excerpted and abridged from the report Climate Change Impacts in the United States: The Fourth National Climate Assessment, Southeast region. 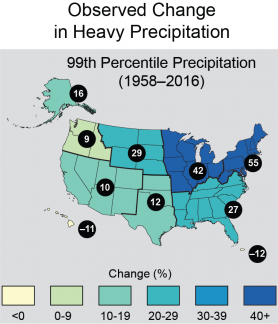 Further inland from the coast, increases in heavy precipitation have also increased the likelihood of inland flooding.2 The heaviest rainfall events have become heavier and more frequent, and since 1991, the amount of rain falling in very heavy precipitation events has been significantly above average.2

On average, the annual cost of damage from inland floods is higher than any other severe weather event—averaging $6.9 billion per year for the period 1976–2006. Additionally, more than 60 percent of U.S. hurricane-caused deaths from 1970 to 1999 occurred in inland counties, with more than half of those deaths related to freshwater flooding.3