Global average sea level is rising, spilling onto low-lying land and increasing the frequency, magnitude, and duration of coastal inundation events. Scientists are highly confident sea level will continue to rise through the end of this century and beyond.

Changes in local sea level result from of a combination of global, regional, and local change. At the global scale, sea level is rising. Measured at tide gauges on every continent and by satellites on orbit, global average sea level has risen about 7 to 8 inches since 1900, with about 3 of those inches occurring since 1993.1

The observed global increase is due mainly to melting of glaciers and ice sheets on land and the thermal expansion of ocean water as it warms. In regions where land is rising faster than sea level (due to tectonic forces, for instance, as in southeast Alaska), local sea level change is decreasing. In other regions, where land is subsiding (often a result of pumping water or oil from underground), local sea level is increasing faster than the global average. 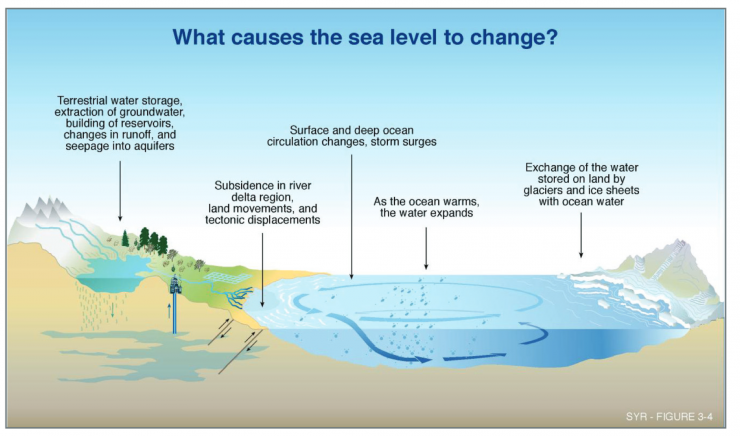 The level of the sea at the shoreline is determined by factors that operate on a great range of time scales. On the time scale of decades to centuries, some of the largest influences on the average levels of the sea are linked to climate and climate change processes.

Human-caused climate change has made a substantial contribution to global mean sea level rise since 1900, contributing to a rate of rise that is greater than during any preceding century in at least 2,800 years.1 Scientists are highly confident global sea level will continue to rise between about 1 and 8 feet by 2100.2 Oceanographers and climatologists developed a set of six global sea level rise scenarios that reflect different assumptions about the degree to which ocean warming and ice sheet loss will affect the rate and magnitude of global sea level rise. Choices the world makes about emissions will also influence sea level.

The table below, adapted from Table 5 in Global and Regional Sea Level Rise Scenarios for the United States, shows estimated global average sea level rise by the indicated years for each of the six scenarios. All values are in inches.

Unlike the scenarios associated with various levels of heat-trapping gases in the atmosphere by the year 2100 (Representative Carbon Pathways) that have no likelihood associated with them, oceanographers have calculated the likelihood for each of the Global Mean Sea Level (GMSL) scenarios. The table below shows interpretations for the likelihood of each scenario; experts judge the most likely ranges are from Intermediate-Low to Intermediate-High. If you require quantified probabilities of exceeding the GMSL scenarios in 2100, see Table 12.4 in Climate Science Special Report: Fourth National Climate Assessment, Volume I, Chapter 12.

At the regional scale, sea level is also influenced by ocean currents, wind patterns, and meltwater from glaciers and ice sheets on Greenland and Antarctica. On smaller scales, environmental factors such as shifts in ocean circulation patterns, changes in Earth's gravitational field and rotation, vertical land movements, sediment compaction, groundwater and fossil fuel withdrawals, and other nonclimatic factors can influence the direction, rate, and magnitude of local sea level changes. 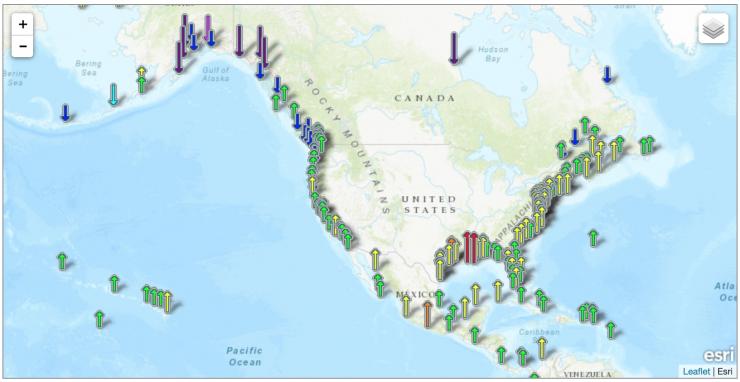 This is a static image of NOAA's interactive relative sea level trends map. Arrows show the direction and magnitude of regional sea level change along coasts around the world.

Choosing a sea level rise scenario based on risk tolerance

Calculating the number of years a project is likely to be useful before being impacted by flooding or inundation can help decision makers evaluate tolerance for risk.

For projects involving structures expected to have a long lifetime, where a loss would be catastrophic, or where there is limited flexibility for adaptation, there is little tolerance for risk, and higher scenarios may be appropriate. Examples include power plants, ports, hospitals, and refuges for endangered species.

Where projects are expected to have a short life span, require little infrastructure, or have the flexibility to make alternate choices, the tolerance for risk is relatively high, and lower scenarios may be appropriate. Examples of projects that may fall into this category include bike paths, golf courses, and parks.