Abnormally high water levels pushed ahead of tropical storms or hurricanes can surge onto land. The pulse of seawater delivered onto the coast can result in extreme coastal and inland floods. Under some conditions, storm surge can cause even more damage than the storms that produce them.

When severe storms such as hurricanes, cyclones, and nor'easters move toward land from the ocean, low pressure and strong winds can push abnormally high water levels onto the coast. Storms moving across the Great Lakes can also produce flood-causing surges. Along ocean coasts, storm surges can produce water levels much higher than normal high tide, resulting in extreme coastal and inland flooding. As locations' vulnerability to storm surge depends in part on the shape of the ocean floor in the region, NOAA's National Hurricane Center offers a series of maps that can help people living in hurricane-prone areas evaluate their risk for storm surge.

Water weighs about 1,700 pounds per cubic yard, so extended pounding by wind- and tide-driven waves of a storm surge can damage or destroy structures not built to withstand such forces. Additional impacts of storm surge include extensive property loss, erosion of beaches, damage to coastal habitats, and undermining the foundations of infrastructure such as roads, railroads, bridges, buildings, and pipelines. Storm surges also pose a serious threat of death by drowning. 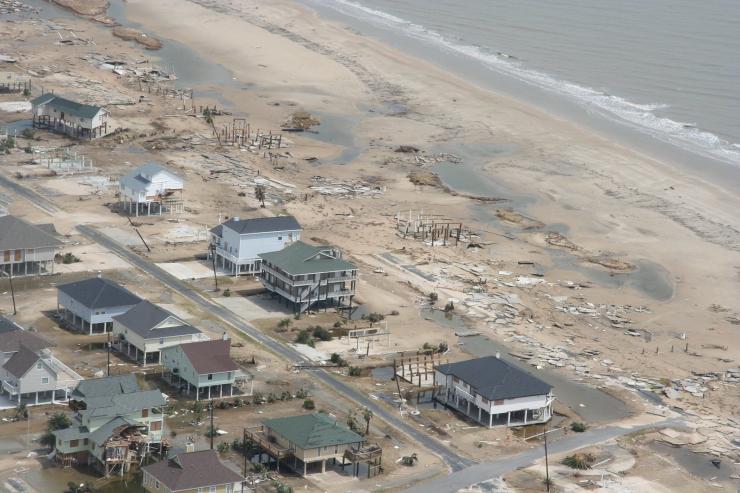 In 2017, Hurricane Irma was a Category 4 storm with 130 mph wind speeds when it made landfall at Cudjoe Key, Florida (20 miles north of Key West). Storm surge inundations at Cudjoe and the surrounding Keys were between 5 and 8 feet. The storm tracked up the west coast of Florida, impacting coastal areas of Georgia and South Carolina with high tides and storm surge that reached 3–5 feet. The winds eventually fell below tropical storm strength, yet many communities along the coasts of Florida, Georgia, North and South Carolina, and Virginia experienced severe wind and storm surge damage; some areas saw near-historic levels of coastal flooding. Learn more about Hurricane Irma's development and impacts in the Southeast Regional Chapter of the Fourth National Climate Assessment. 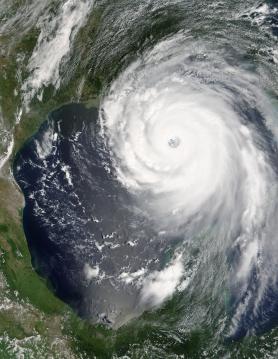 Hurricane Katrina was one of the most powerful storms to strike the United States, with winds of 160 miles per hour (257 kilometers per hour) and stronger gusts. The massive storm covers much of the Gulf of Mexico, spanning from the U.S. coast to the Yucatan Peninsula.

In order to clearly communicate the potential impacts of flooding from storm surge, predictions for inundation from storm surge are described in terms of height above ground level. For example, a storm surge prediction of 20 feet above ground level means that forecasters expect 20 feet of water to cover that area. The depth of flooding will gradually decrease as it moves further inland. However, as some coastal regions have vast areas of low-lying land inland from the coast, it's important for residents and visitors to be aware of local conditions, and know how far inland local authorities consider lands to be vulnerable from various heights of storm surge. 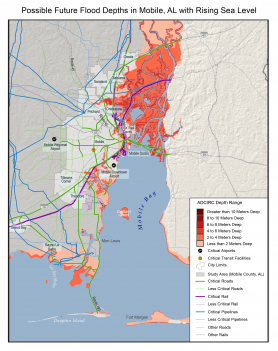 Transportation systems in many coastal areas in the United States are vulnerable to the impacts of sea level rise. This map shows that many parts of Mobile, Alabama—including critical roads, rail lines, and pipelines—would be exposed to storm surge under a scenario of a 30-inch sea level rise combined with a major hurricane. Click the image for a larger view.

Winds from coastal storms generate waves in the ocean, and the stronger the wind, the larger the waves. As storm-generated waves move toward the shore, wave heights increase as they interact with the ocean bottom. As the wave heights increase, the waves eventually break, causing onshore flow near the water's surface and offshore flow or “undertow” near the ocean's bottom. The result is an overall increase in elevation of water level at the coast. The rise in the water surface caused by breaking waves is called "wave setup," and the rush of wave water up the coastal slope is called "wave run-up." Wave run-up and setup are often modeled by coastal engineers during the design phase of a coastal development project to make sure structures are built to withstand strong waves. Additionally, engineers want to be sure that overtopping—a situation when waves are higher than the dunes or structures they encounter—will not occur. Wave setup, wave run-up, and overtopping associated with storm surge are major causes of beach erosion.

The Impacts from Waves section is excerpted and abridged from the report Climate Change Impacts in the United States: The Third National Climate Assessment, Northeast region.