Impacts of climate change on ecosystems reduce their ability to improve water quality and regulate water flows. Rapid changes to ecosystems may cause the displacement or loss of many species. Timing of biological events is shifting, affecting species and habitats.

Adapted from the Third and Fourth National Climate Assessment Reports

The value of ecosystems 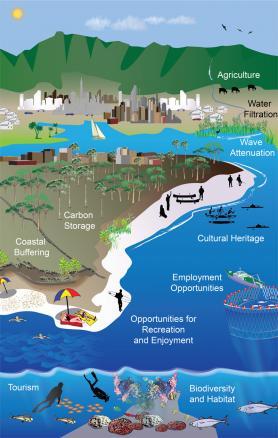 Ecosystems provide a suite of valuable services on which humans depend for food, economic activities, inspiration, and enjoyment.

From large-scale agriculture, to massive dams and reservoirs, to managed fire regimes dating back thousands of years, humans have transformed the planet by engineering Earth’s physical and biological systems to better serve our needs and desires. Even with these transformations, however, humans continue to depend on the life-sustaining benefits and services provided by natural environments.

The benefits and services we receive from natural ecosystems underpin our economy by providing food, jobs, building materials, medicines, clean water, outdoor recreation, and wildlife habitat, while also protecting our communities from extreme events such as flooding, storm-surge, drought, heat waves, and wildfire.

Economists and natural resource managers have tried to put a price tag on some of these services—timber, seafood, tourism, water purification—while the economic value of others—biodiversity, cultural or tribal identity, quality of life—remains conceptual. By one estimate, the total global value of ecosystem services has been valued at between $125–145 trillion per year (based on 2007 US dollars).1

As the climate changes, it will influence the distribution, extent, and composition of ecosystems, and hence affect the spectrum of services and economic value they provide. Society’s choices of what actions to take in the face of climate change can either make it harder or easier for ecosystems to continue to provide the goods and services we require. Effective action by resource managers, communities, and the public is both possible and essential.

This introduction is abridged from the report National Fish, Wildlife, and Plants Climate Adaptation Strategy, Section 1.3.3 and 1.3.4.

Across much of the United States, spring is starting earlier in the year relative to 20th-century averages. In some cases, these changes lead to resource mismatches and changes in species interactions. Climate change is also leading to large-scale shifts in the range and abundance of species, which are altering terrestrial, freshwater, and marine ecosystems. Unfortunately, species and ecosystems are already contending with multiple other environmental stresses, such as habitat loss, pollution, invasive species, and over-harvesting. The cumulative effect of these multiple stressors, in concert with a rapidly changing climate, is expected to disrupt ecosystem processes and services, and increase the risk of species extinctions. 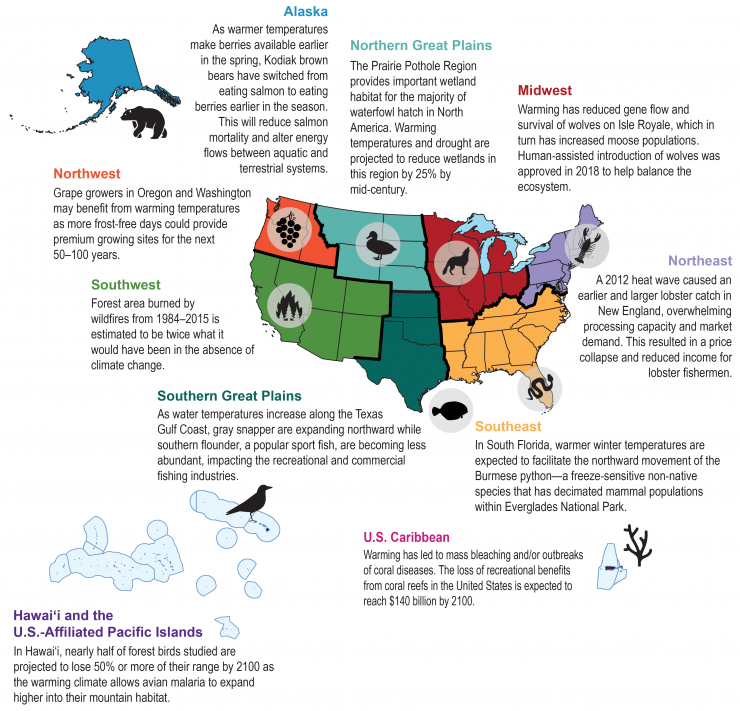 Selected examples of impacts to biodiversity, ecosystems, and ecosystem services that are linked to climate change throughout the United States.

Species respond to climate change in different ways and at different rates. This diversity in responses increases the likelihood that important interconnections that have evolved over millennia—such as between pollinators and the flowers they fertilize, or breeding birds and the insects on which they feed—will be disrupted and fail. In addition, the confounding effects of other stressors such as land use change and pollution may hinder or prevent innate adaptive responses.

As climate conditions exceed the historical range of variability under which our current ecosystems function, it is likely that key ecological thresholds or tipping points will be surpassed. Recent studies indicate that ecosystems as diverse as western North American forests and Caribbean coral reefs are increasingly vulnerable to transformative ecological change.

To learn more about the impacts of climate change and variability on ecosystem vulnerability, visit the subtopic pages: