Increasing temperatures and decreasing precipitation can change the frequency and severity of fires in natural vegetation, altering the succession of plants and animals that can thrive in an area.

Wildland fire regimes are a function of the interactions between vegetation, land use, and climate. Climate change, through increasing temperatures and decreasing precipitation may result in changes to fire behavior, occurrence and severity. In the western United States, which is currently undergoing a severe drought, the fire season is already longer now than it was several decades ago, and the region experiences many more large-scale fires. 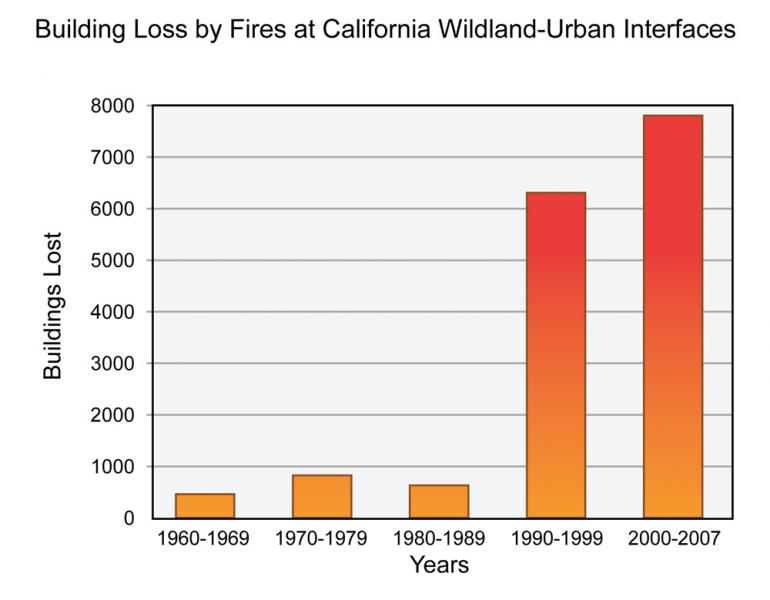 Increasing infrastructure losses in California since the 1960s are due to many factors, including population growth, forest management policies, and building decisions, but also because of climate factors like longer fire seasons.

Looking to the future, the National Research Council projects that for every 1°C warming across the western United States, there will be a two- to six-fold increase in the amount of area burned by wildfire. Potential impacts of this increase include: reduced provisioning of timber supplies, large-scale release of carbon into the atmosphere, increased water scarcity, soil erosion and landslides, and loss of homes and infrastructure. These impacts will have severe economic consequences through business disruptions and increases in the costs of wildfire fighting and insurance.

A warming climate exerts its influence on fires through multiple pathways: earlier spring snowmelt and longer dry seasons; higher summer temperatures that help dry out vegetation and soils; and creating more hospitable conditions for insect pests, which kill vegetation and create wildfire fuel. Model projections suggest the number of low humidity days (and high fire danger days) is already increasing across much of the western U.S. Other model simulations have predicted that seasonal fire severity could increase from 10 percent to 30 percent in the southeastern United States and 10 percent to 20 percent in the Northeast by 2060.

Excerpted and adapted from the United States Climate Change Panel report The Effects of Climate Change on Agriculture, Land Resources, Water Resources, and Biodiversity, Sections 3.2.2.2 and 3.2.3.6; and the executive summary of the report Impacts of climate change on biodiversity, ecosystems, and ecosystem services: Technical input to the 2013 National Climate Assessment.