Petroleum, natural gas, and electrical infrastructure along the East and Gulf Coasts are at increased risk of damage from rising sea levels and hurricanes of greater intensity. This vulnerable infrastructure serves other parts of the country, so regional disruptions are projected to have national implications. Energy systems of Hawai‘i and the U.S. Caribbean are especially vulnerable to sea level rise and extreme weather, as they rely on imports of petroleum through coastal infrastructure, ports, and storage facilities.

Offshore oil platforms, port facilities, pipelines, and oil storage facilities are among the energy infrastructure located at or near current sea level. 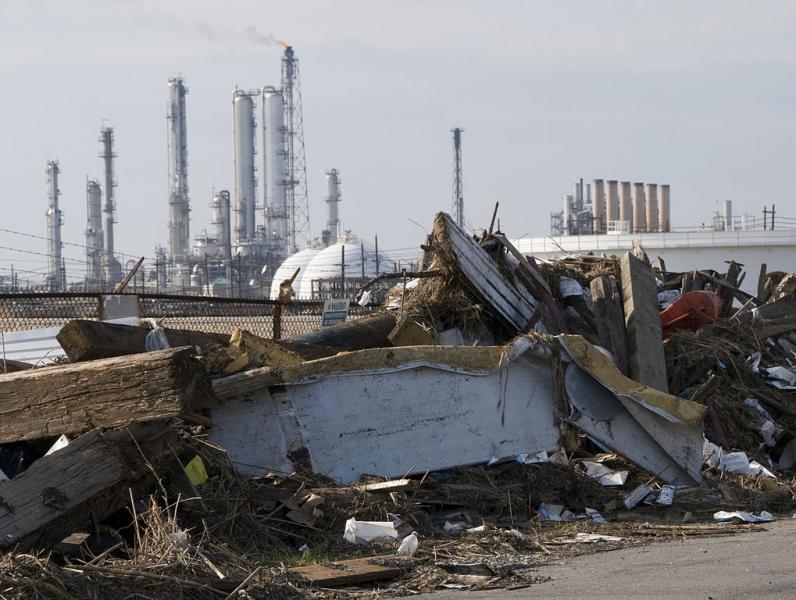 Debris left in the wake of Hurricane Ike in 2008 lines the side of a road near an oil refinery in Port Arthur, Texas.

As global sea level rises, energy infrastructure along coasts will be subject to inundation. Roughly one-third of the United States’ petroleum- and gas-refining facilities are in the coastal plains of the Gulf of Mexico; many of these facilities are exposed to storm surge, high winds, and flooding from tropical storms and hurricanes.

More frequent and intense extreme precipitation events are projected to increase the risk of floods for inland energy infrastructure. The amount of precipitation falling in the heaviest one percent of rain events has increased in every region of the United States except Hawai'i,1 subjecting many energy facilities to flooding and increasing the risk to exposed assets such as energy transmission lines. As many energy facilities are located along rivers—to take advantage of the same water-borne access to raw materials such as coal and petroleum as coastal facilities—operations and infrastructure are exposed to changes in river discharge due to events such as floods from intense precipitation or rapid spring snowmelt or transportation-halting low water levels associated with prolonged drought. 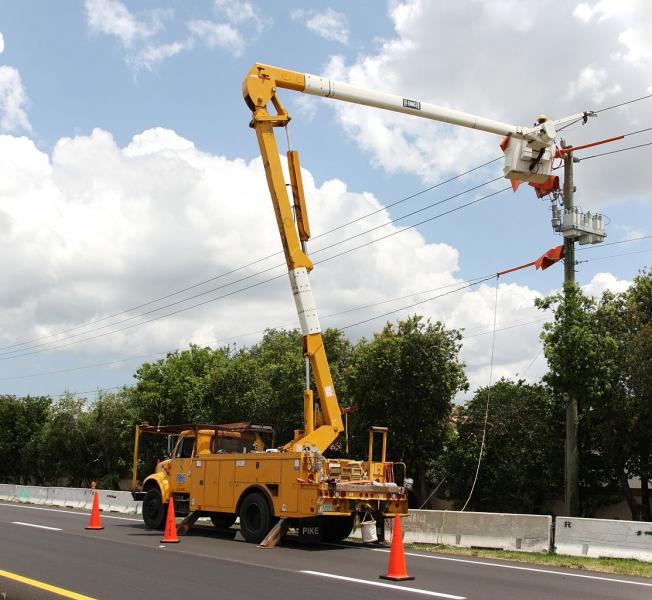 Utility worker in a raised bucket works on a power line in Weston, Florida.

Power generation facilities that require proximity to water sources—hydropower plants and thermoelectric plants that use water for cooling, for instance—are constantly exposed to flooding. Additionally, many oil- and coal-transporting rail lines follow topographic low points along rivers, subjecting the energy supply chain to climate- and weather-related delays. Increases in extreme weather events also have the potential to increase wind-driven damage of transmission lines.

Temperatures are rising in all regions, and these increases are expected to drive greater use of air conditioning. The increase in annual electricity demand across the country for cooling is offset only marginally by the relatively small decline in heating demand that is met with electric power. In addition, higher temperatures reduce the thermal efficiency and generating capacity of thermoelectric power plants and reduce the efficiency and current-carrying capacity of transmission and distribution lines. Extended periods of hot days may push existing energy infrastructure to (or beyond) its capacity, potentially initiating cascading effects through other sectors.

Many adaptation options for energy infrastructure involve expensive, long-term efforts. For instance, based on needs for water or proximity to ocean ports, relocating some critical facilities will be difficult. However, some energy facilities may benefit from installation of protection from sea level rise and flooding. Planning ahead for changing conditions can improve the climate resilience of the energy sector.

This section is excerpted and abridged from Impacts, Risks, and Adaptation in the United States: Fourth National Climate Assessment, Volume II (Chapter 4: Energy Supply, Delivery, and Demand) and Climate Change Impacts in the United States: The Third National Climate Assessment (Chapter 2: Our Changing Climate and Chapter 4: Energy Supply and Use).