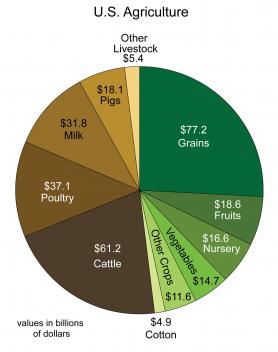 This chart shows a breakdown of the monetary value of U.S. agriculture products by category.

Agriculture in the United States currently produces approximately $300 billion a year in commodities, with livestock accounting for roughly half the value in 2012.1 Agricultural production has always been affected by climate and weather variability, and American farmers have adopted production practices appropriate to their local environmental conditions and resource availability.2 The climate and weather patterns that have historically shaped U.S. agricultural production, however, are changing. Projected changes in climate over the next century have the potential to transform American agriculture, particularly for production systems at the marginal climate ranges, such as drought-prone areas in the Southwest.1

Climate change poses new challenges for crop and livestock production in America. By 2050, average global temperature is projected to be between 1.8°F and 5.4°F higher and precipitation extremes will be more intense.3 Consequently, yields of major U.S. crops and farm profits are expected to decline.3 California’s warm and dry Central Valley, for example, is predicted to see a decrease in productivity for most crops because of warmer temperatures3 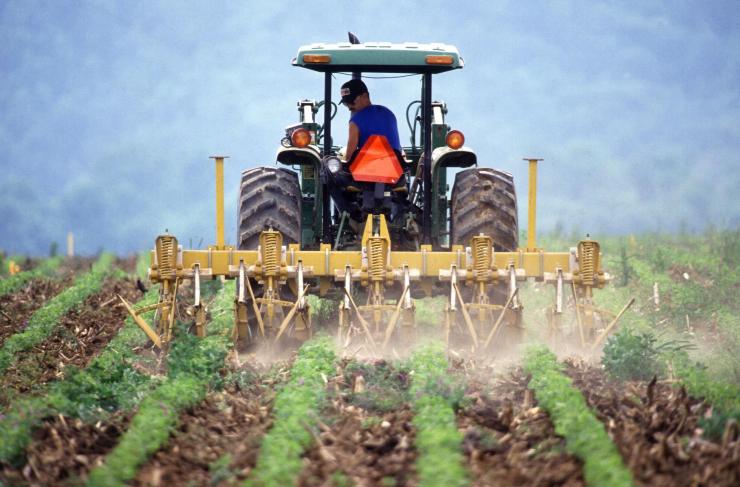 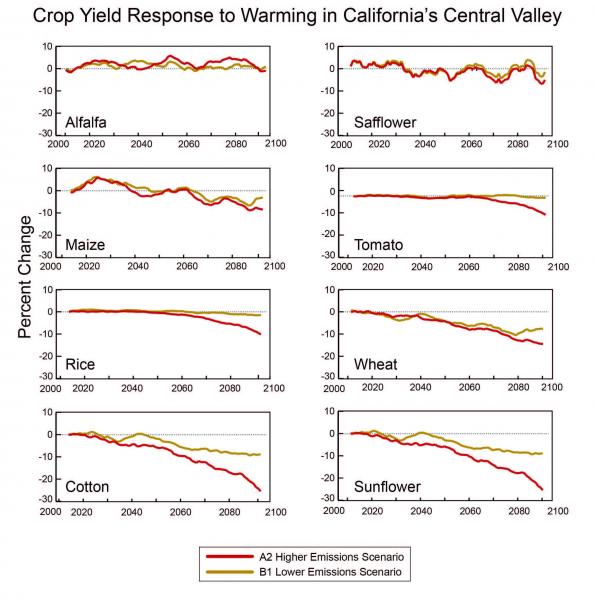 Climate change through this century will affect crops differently because individual species respond differently to warming temperatures. This figure is an example of the potential impacts on different crops in the same geographic region. Crop yield responses for eight crops in California’s Central Valley are projected under two emissions scenarios, one in which heat-trapping gas emissions are substantially reduced (B1) and another in which emissions continue to grow (A2). The analysis assumes adequate water supplies and nutrients are maintained while temperatures increase. The lines show five-year moving averages for the period from 2010 to 2094, with the yield changes shown as differences from the year 2009. Yield response varies among crops, with cotton, maize, wheat, and sunflower showing yield declines early in the period. Alfalfa and safflower showed no yield declines during the period. Rice and tomato do not show a yield response until the latter half of the period, with the higher emissions scenario resulting in a larger yield response.

Warmer temperatures are also expected to put physiological stress on livestock animals, decreasing productivity of meat, milk, and eggs.3 More intense, frequent, and longer-lasting heat waves expected with climate change pose threats to outdoor and indoor livestock operations. The potential harm is exemplified by the deaths of thousands of cattle and poultry during past heat wave events.4

Precipitation plays an important role as well and interacts with temperature to influence productivity. In general, wetter areas are expected to get wetter and drier areas are expected to get drier with climate change.3 The 2012 drought impacted 80 percent of U.S. agricultural land, the most extensive since the 1950s.5 In 2014, California experienced its third driest year on record, representing a statewide loss of $2.2 billion in crop, livestock, and dairy production, water pumping costs, and jobs lost.6 Too much or too little rain threatens the health of crops and livestock. Floods also impact long-term agricultural productivity by increasing erosion.

Some species of weeds, diseases, and insects will thrive as climate changes. Geographic temperature and moisture shifts may allow pest species to shift their ranges and expand their populations, forcing producers to cope with new biological stresses on their operations.3

To learn more about regional food production vulnerabilities to climate and weather, and tools for adaptation, visit climatehubs.oce.usda.gov.