Coral reefs, estuaries, and kelp forests provide shelter and feeding grounds for fisheries. Climate-informed management practices may increase the resilience of these features and the diverse habitats they provide. 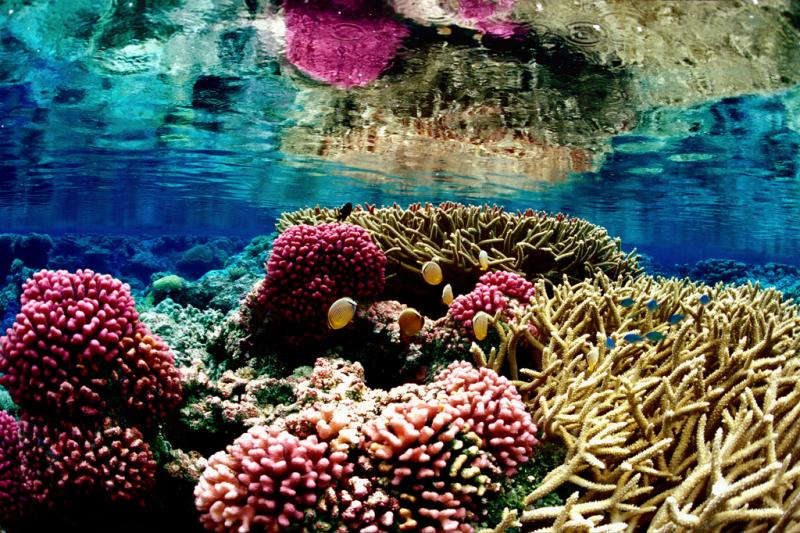 Coastal, marine, and estuarine habitats—including coral reefs, estuaries, and kelp forests—are among some of the most biologically rich and economically valuable areas on Earth. These habitats: 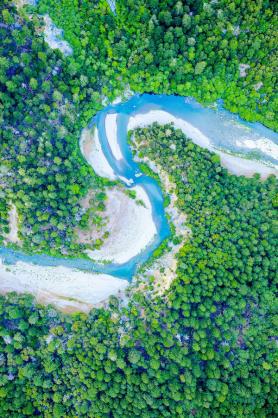 Spawning grounds in inland rivers are essential habitat for anadromous fish such as salmon.

Human activities have significantly altered coastal and marine habitats over time. Valuable habitat continues to be degraded, lost, or made inaccessible due to coastal development, land-based pollution, fishing gear impacts, unsustainable fishing practices, invasive species, dams and other blockages that restrict access for migratory fish species, and reduction in the amount and delivery of freshwater to estuaries. Climate change also has the potential to cause severe and wide-ranging impacts on habitat through changing temperatures, ocean acidification, different circulation patterns, and rising sea levels, to name a few.

Degradation and loss of habitat has significant economic, social, and environmental consequences. For example, habitat degradation and loss affects the size and diversity of fish populations, which in turn impact the success of commercial and recreational fisheries. Given the continuing increase in carbon dioxide emissions which lead to ocean acidification and the trend for human populations to concentrate near the coasts, the pressures and potential impacts on coastal and marine habitat can be expected to increase.

Projected pH at the surface of the global ocean from 1770 to 2100. Click twice to view GIF animation.

Once habitat is damaged or lost, it is difficult and costly to recover the benefits and services that it provides. Government agencies and other organizations are working with a sense of urgency to protect and sustain healthy coastal and marine habitat and the communities and economies that depend on them.

The preceding text is abridged from the National Oceanic and Atmospheric Administration's Habitat Conservation webpage.

The health of coral reef ecosystems is of particular concern as our planet warms. Healthy coral reefs support hundreds of billions of dollars in food, jobs, recreational opportunities, coastal protection, and other important services. Global climate change, unsustainable fishing practices, and pollution are among the main threats to these ecosystems. 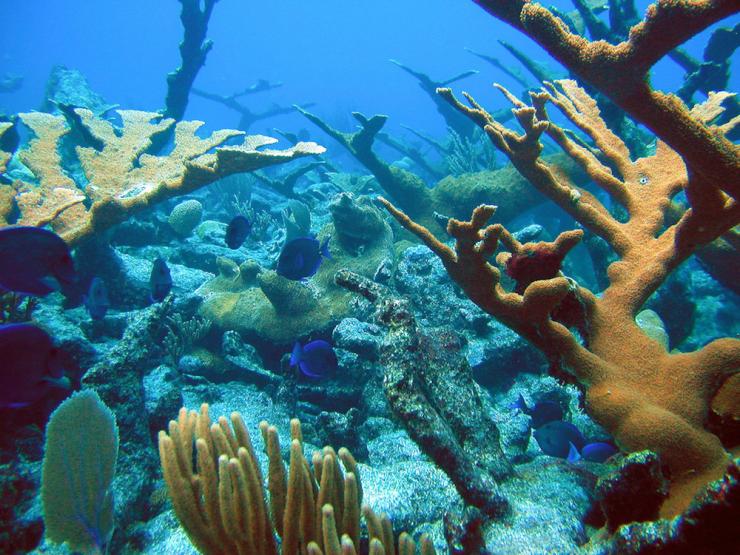 According to the 2008 report Status of Coral Reefs of the World,1 19 percent of the world’s reefs are already effectively lost, 15 percent are seriously threatened with loss in the next 10–20 years, and 20 percent are under threat of loss in the next 20–40 years. The decline and loss of coral reef ecosystems have significant social, cultural, economic, and ecological impacts on people and communities in the United States and around the world. Effective leadership and management will be essential for healthy, resilient reef ecosystems to continue providing these valuable services to current and future generations

The preceding text is abridged from the NOAA report Coral Reef Conservation Program Goals and Objectives 2010–2015. 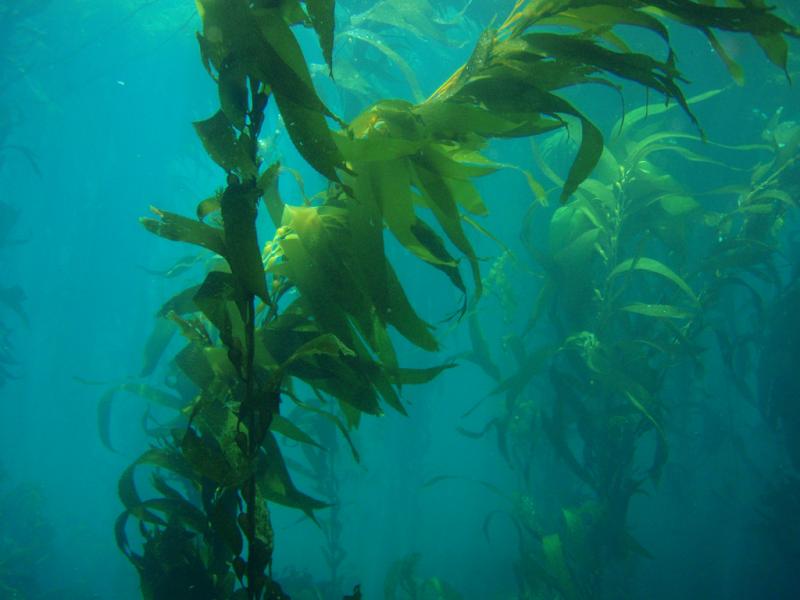 Kelp forests grow predominantly along the Pacific Coast, from Alaska to the waters of Baja California. Tiered like a terrestrial rainforest with a canopy and several layers below, kelp forests in the eastern Pacific Ocean provide habitat that is essential for a healthy marine ecosystem. Dense canopies of kelp generally occur in cold, nutrient-rich waters. Because they need light for photosynthesis, kelp forests can only grow in shallow open waters.

Kelp forests harbor a high diversity of plants and animals. Many organisms use the thick blades of kelp leaves as a safe shelter to protect their young from predators and rough storms.  Among the many mammals and birds that use kelp forests for protection or feeding are seals, sea lions, whales, sea otters, gulls, terns, snowy egrets, great blue herons, cormorants, and shore birds.

As climate change continues, changes in water temperature, light level, nutrient availability, and sea level all have the potential to impact the growth and distribution of kelp forests. In turn, changes in this important habitat could impact populations that depend upon it, and humans that depend on these populations.

Estuaries are bodies of water and their surrounding coastal habitats typically found where rivers meet the sea. Estuaries are some of the most productive ecosystems in the world, harboring unique plant and animal communities and providing important habitat for many animal species to feed, nest, and breed. 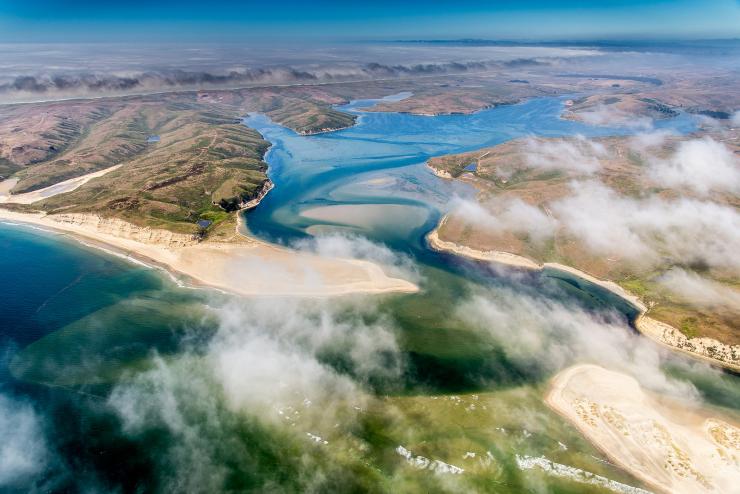 An aerial view of Drakes Bay and estuary on the Point Reyes Pennisula, California.

Climate change and variability are stressors to these systems, causing changes in water temperature, chemistry (pH, oxygen), and sea level. Human activities cause additional stress and have led to a decline in the health of estuaries, posing a threat to the ecosystems they support. As the sensitivity and response of estuary systems to changing conditions varies with local conditions, local management decisions may be able to boost the climate resilience of these systems.

The preceding text is excerpted and abridged from NOAA's National Ocean Service webpages.