The atmosphere's increasing abundance of carbon dioxide is increasing the acidity of ocean waters, and the ocean's net accumulation of heat energy is increasing water temperatures. Changes in ocean conditions result in changes to marine ecosystems.

Shorter-term changes in the physical characteristics of ocean water are also disrupting ecosystems: ocean heat waves—periods when warm water persists in a region for several months or more—are already affecting marine ecosystems and disrupting fisheries. Heat wave events that occurred along the Northeast Coast in 2012 and along the West Coast in 2014-2016 resulted in increased mortality of marine mammals, harmful algal blooms, shifts in food-webs, and the appearance of warm-water species in places they did not previously exist. These events give scientists a preview of conditions projected to occur in the next 50 years, and provide opportunities to envision technological adaptations such as climate forecast systems. Learn more about "The Blob," the years-long Pacific marine heatwave that occurred in the mid-2010s » 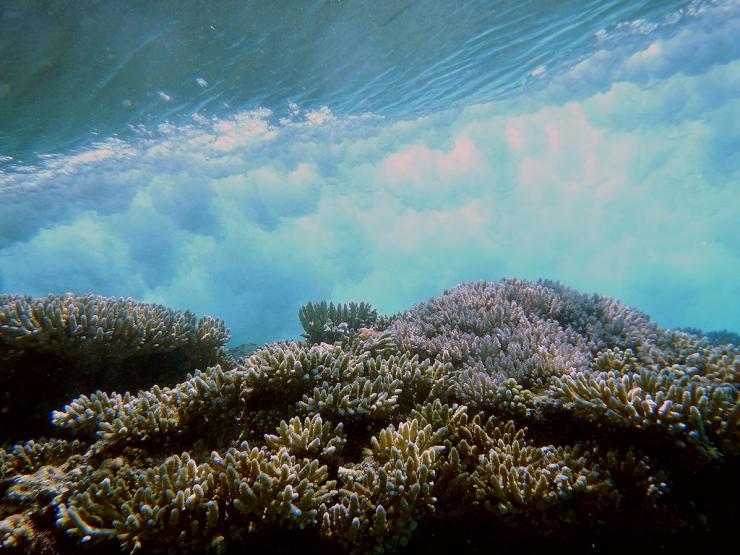 A wave breaking over a coral reef.

Changes in ocean water can impact all levels of the food web. Small organisms such as plankton as well as larger organisms such as corals and bivalves have limited ability to move to areas with better conditions. 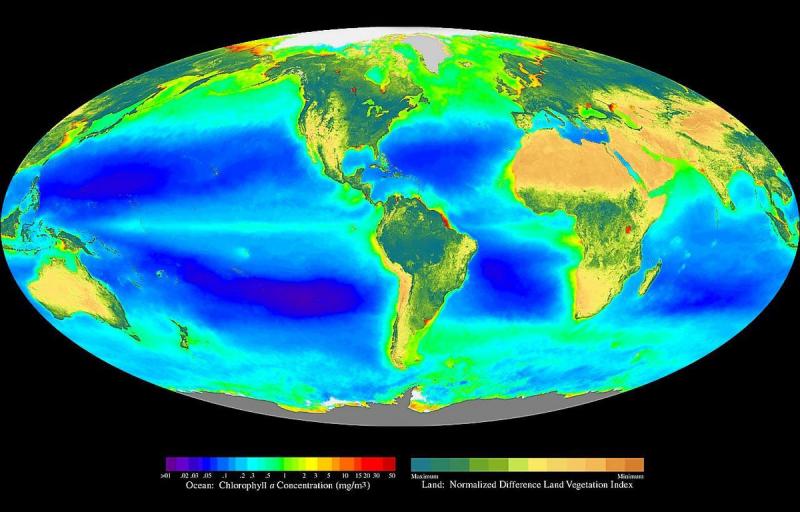 Primary production refers to the abundance of plants on Earth—an indicator of the potential for capturing the sun's energy in complex molecules (sugars). This image shows primary production on land and in the ocean from September 1997 to August 2000.

Changes at the base of the food web will eventually impact the higher trophic levels (the position an organism occupies in a food chain), yet global patterns of these changes are difficult to project. Existing projections suggest an increase in primary production (photosynthesis by plant-like plankton) in high-latitude oceans, because the amount of sunlight goes up as the amount of water covered by sea ice goes down. Projections suggest a decrease in primary production in the tropics and at mid-latitudes because of reduced nutrient supply.

Projections of future conditions also indicate that alteration of the biology, distribution, and seasonal activity of marine organisms will disturb food web interactions involving copepods (tiny crustaceans) that graze on planktonic algae, another important foundational level of the marine food chain. Increasing temperature, nutrient fluctuations, and human-induced eutrophication (an excessive richness of nutrients in a body of water that causes a dense growth of plant life and death of animal life from lack of oxygen) may support the development of harmful algal blooms in coastal areas. Upwelling areas where wind and currents bring cold, nutrient-rich water to the surface support productive ecosystems, but can also promote the occurrence of harmful algal blooms. 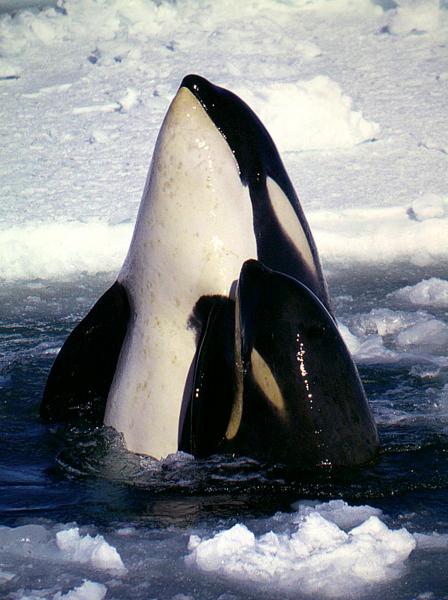 Mother and calf pair of orcas in the Ross Sea, near Antarctica.

Most climate change scenarios project a shift or expansion of the ranges of many species of plankton, fish, and invertebrates toward higher latitudes.

Scientists estimate range shifts of tens of kilometers per decade will result in changes to species richness and altered community composition. Organisms less likely to shift to higher latitudes because they are less mobile—such as corals—or more tolerant of the direct effects of climate change may also be affected because the existing food webs on which they depend are likely to change around them.

In polar areas, populations of invertebrates and fish adapted to colder waters may decline, as they have no place to go. Some of those species may face local extinction.

The preceding text is excerpted and abridged from the report Climate Change 2013: The Physical Science Basis. Contribution of Working Group I to the Fifth Assessment Report of the Intergovernmental Panel on Climate Change (Chapter 3, Observations: Ocean).