Extreme weather and climate-related changes can damage infrastructure, increase maintenance needs, and interrupt normal operations of roads, bridges, railways, and vehicles. In our fast-paced economy, any disruption of the transportation network can delay the delivery of materials, goods, and people, triggering a cascade of delays and economic impacts across multiple systems. 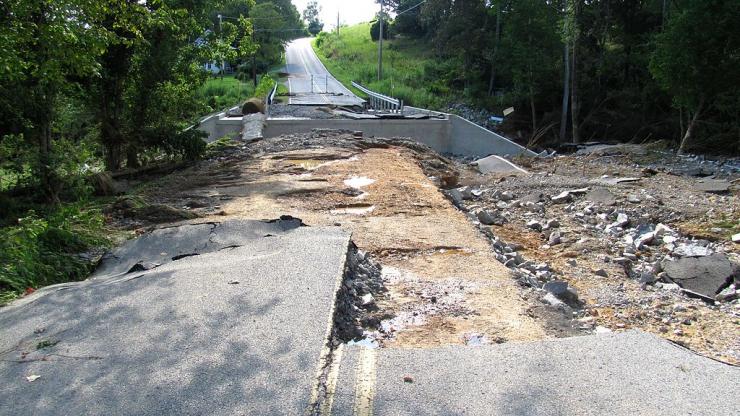 Rocks and other debris scoured this roadbed during a flood in Putman County, Tennessee, in 2010.

Urban settings tend to amplify the impacts of flooding, especially with aging stormwater systems. More frequent localized flooding leads to more frequent travel disruptions for commuters, travelers, and freight. The rural transportation network may lack redundancy, which increases the social and economic dependence on each road. Disruptions can affect agriculture, manufacturing, tourism, and more. The 2013 flooding in Boulder, Colorado, illustrates the dependence on roadways; the event resulted in 485 miles of damaged roadways and 1,100 landslide and hillslope failures that cut off many rural towns for weeks. In addition to reducing economic activity across the nation, these events incur costs for repair and replacement.

Increased exposure to moisture associated with more frequent storms can also impact the structural integrity of roads, bridges, and tunnels. For instance, in Louisiana, long-term submersion of approximately 200 miles of roadway caused nearly $50 million in damages. Additionally, increases in the heaviest precipitation events may increase washouts of roads and scouring of bridge supports. As more precipitation falls as rain rather than snow, erosion can become a larger factor in damaging roads, bridges, and railways. 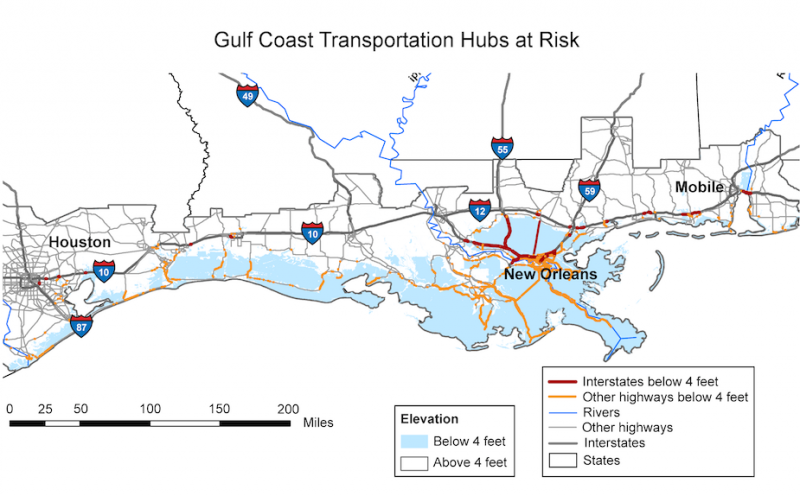 In the Gulf Coast region, 2,400 miles of major roadway are projected to be inundated by sea level rise within this century. The map shows roadways at risk in the event of a sea level rise of about four feet, which is within the range of projections for this region during this time frame.

In coastal areas, increases in strong hurricanes and sea level have the potential to damage land-based transportation. In the Gulf of Mexico, for instance, a storm surge of 18 feet could inundate one-third of railways in the region. Sea level rise expected by 2100 will make an additional 2,400 miles of major highways in the Gulf Coast subject to permanent flooding. Land-based transportation infrastructure in the Gulf Coast supports economic activity worth hundreds of billion dollars each year, and these assets are increasingly at risk from climate-related impacts. 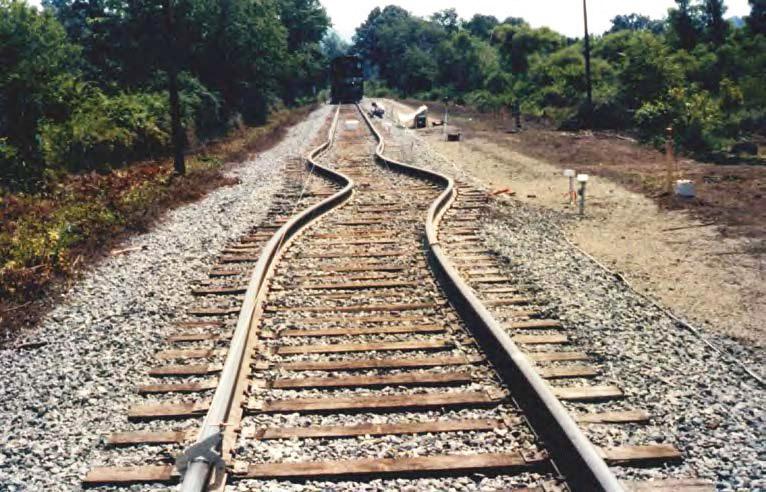 Increased temperatures can affect land-based transportation through asphalt road degradation, rail buckling, thermal expansion of bridges, and by increasing needs for maintenance. Road and rail systems are typically engineered to withstand particular temperature ranges, based on anticipated future weather. When temperatures exceed the range for which they were designed, pavement can soften, rails can kink, and steel structures can expand, leading to pavement failure, derailments, and accelerated deterioration. Increased temperatures may also impact maintenance schedules of roads and railways due to concerns over the health and safety of outdoor workers, who could face heat exhaustion if required to work in high temperatures.

Higher temperatures can cause additional issues for land-based transportation systems in various regions. For instance, much of the transportation infrastructure in Alaska is built on permafrost, which provides a stable building foundation so long as it remains frozen. When permafrost thaws, however, roads and runways it has supported may slump. Also, in regions where drought conditions are present, increased temperatures increase the risk of wildfire. Increasing frequency, magnitude, and duration of wildfires pose risks to roads, bridges, and railroads. Increased temperatures may also benefit the transportation system in some regions by reducing maintenance costs related to de-icing and enabling construction and repair crews to work over a longer season.