Changes in the magnitude and timing of precipitation are likely to have both positive and negative effects on transportation along rivers, in lakes, and in the oceans.

In addition to increases in temperatures expected for all parts of the country, many regions will also experience changes in the magnitude and timing of precipitation. Climate scientists often summarize projected trends with the statement, “wet places will get wetter and dry places will get drier.” These changes are likely to have both positive and negative effects on water-based transportation along rivers, in lakes, and in the oceans.

A river barge filled with coal and sand moves along the Ohio River.

Higher temperatures increase the rate of evapotranspiration—the sum of evaporation and plant transpiration. When combined with decreased precipitation, drought conditions may develop, resulting in decreased water levels in rivers and lakes. As climate changes, climate scientists project that some regions will experience increased frequency of drought conditions.

The effects of decreased water levels on waterborne transporation were seen firsthand in 2012 when low water on the Mississippi River substantially reduced barge traffic. This event affected significant portions of U.S. grain and coal exports, resulting in substantial economic losses. In the Great Lakes and the Saint Lawrence Seaway, decreased water levels could adversely affect shipping, potentially increasing shipping costs by 13–29 percent by 2050.1

Increases in the frequency of extreme storm events could also affect waterborne transportation. Excess runoff can increase sedimentation, reducing the maximum draft (and hence maximum loading) of ships, or increasing costs for maintenance dredging. Conversely, higher water levels, floating debris, and loss of navigational aids in rivers during extreme storm events could limit ship traffic due to unsafe conditions. This was the case in 1993, when flooding along the Mississippi River reduced barge traffic. 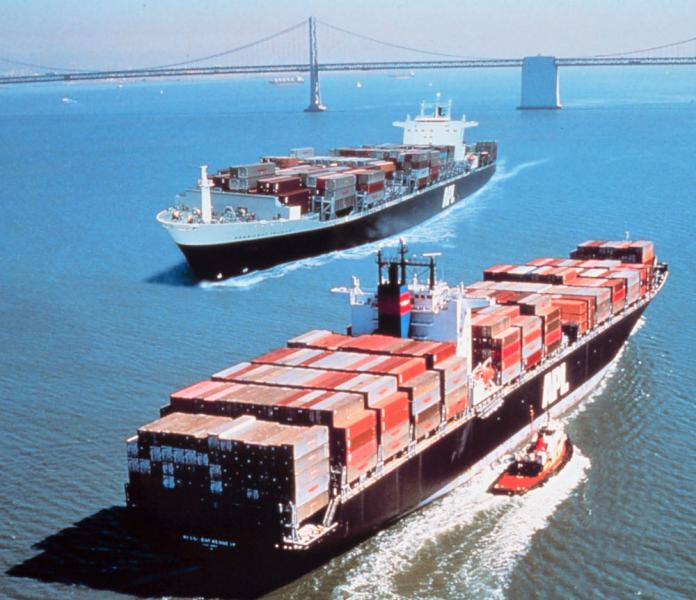 Photo of two container ships passing one another in San Francisco Bay.

Along coasts, increases in the frequency of strong hurricanes and sea level rise pose threats to seaports and the economic activities they support. Ports are necessarily located in low-lying areas; therefore, they are at risk for damage from storm surge, flooding, and sea level rise. Six of the nation’s top 10 freight gateways are threatened by sea level rise, potentially affecting imports and exports of food, petroleum products, and other goods. In some areas, the combination of rising seas and sinking land will necessitate the reconfiguration of ports and harbors. For some bridges, rising sea levels can limit clearance under bridges, limiting waterborne traffic during extreme high tides.

Higher air temperatures may also benefit water-based transportation in some ways. Longer periods of ice-free conditions may allow for increased water traffic in the Saint Lawrence Seaway, the Upper Mississippi River, and the Great Lakes. Additionally, a navigation route through the Arctic Ocean may become possible during some parts of the year.