Wildfire is a naturally occurring phenomenon that doesn’t recognize political boundaries. When large fires rage in parts of North America, the countries of Canada, the United States, and Mexico strive to work together to share firefighting resources.

In 2015, a strong El Niño brought warmer-than-usual temperatures and dry, windy conditions to North America, leading to the second worst wildfire season on record. Wildland fires burned in Alaska, Canada, the western United States, and Mexico, and smoke rolled over large swaths of the continent. 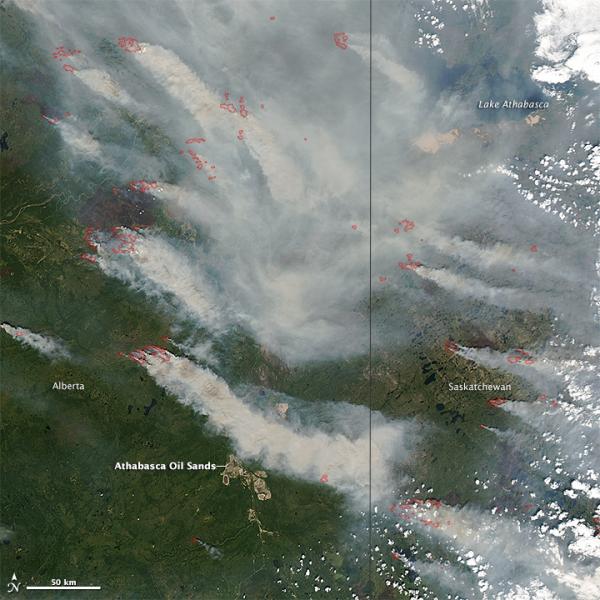 On June 28, 2015, the Moderate Resolution Imaging Spectroradiometer (MODIS) on NASA’s Aqua satellite captured this image of wildfires burning in Canada. Actively burning areas are outlined in red, while forests appear dark green. The vertical line shows the boundary between Alberta and Saskatchewan.

The northern provinces of Canada saw some of the most extensive damage: more than 1.8 million acres burned in Saskatchewan alone, and an estimated 13,000 people were evacuated from their homes to protect their lives and health from fire and smoke.

On June 24, the Canadian Interagency Forest Fire Centre (CIFFC) assessed their national fire preparedness at level 1 of 5, indicating that fire activity was currently low and the agency was equipped to fight fires across the country. By June 28, fires were so severe that the preparedness index was set to level 4—in just four days, the agency’s assessment of their ability to respond to fires had dropped by 80 percent. For two weeks in July, from the 6th to the 20th, fires were so severe that the preparedness level reached 5, indicating that national resources for fighting fires were exhausted.

Requesting assistance from other countries in North America may have seemed like an obvious solution, but managing fires across borders isn’t always straightforward. Wildland fire is managed differently in Canada, the United States, and Mexico, and each country has its own fire danger rating system. The countries also use different units of measure and fire forecast products.

This means a fire considered as "significant" in the United States might receive a different classification in Canada or Mexico. These differences can hinder decision makers’ abilities to prioritize resources for fighting fires on the continent, and can also pose a challenge to integrating teams of firefighters from different countries.

International fire management agencies have recognized these difficulties, and are now working to address the issues of working together. The agencies see that integrating their fire management planning could enable them to prepare and respond more efficiently to combat large blazes on the continent, wherever they occur.

In the coming years, as warmer temperatures associated with global warming increase evaporation rates and the duration of fire season continues to lengthen, wildfires that do occur may be even more severe than in the past. These changes increase the importance of international collaboration that will help countries work together. 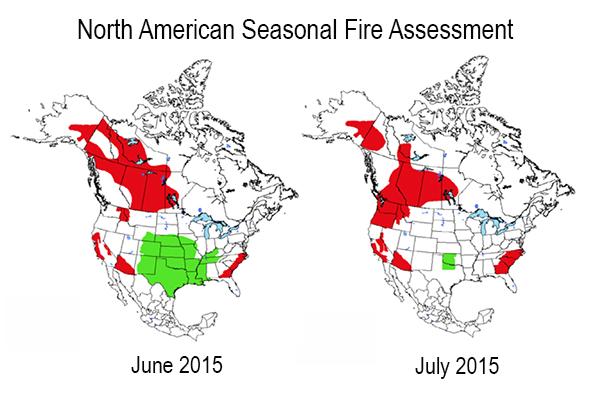 In July, Canadian decision makers at the CIFFC recognized that their resources were nearly depleted, and that they still had months to go before the end of the fire season. To help them decide if they should bring in international resources to help them manage fires, they consulted the North American Seasonal Wildfire Outlook, a continent-wide outlook product that provides a long-range forecast of upcoming fire conditions. The Outlook considers multiple factors that can increase or decrease seasonal fire activity for various regions, and provides standardized outputs for all countries on the continent.

When leaders at the CIFFC saw that the Outlook product—as well as the short- to medium-term fire weather briefings—for the next several weeks predicted little chance of relief from fire activity in Canada, they made the decision to bring in firefighters from other countries. Eventually, firefighters from the United States, Mexico, South Africa, Australia, and New Zealand helped battle the blazes in Canada.

The fire danger in Saskatchewan subsided during late July, but personnel from the international teams continued to fight fires in Alberta and British Columbia. Again, CIFCC decision makers consulted the Outlook and medium- to long-range forecasts to determine how long to keep the additional fire fighters in the country.

Having climate information on hand while making decisions about firefighting resources was critical for Canadian resource managers.