People of the Salmon collaborate with farmers to ensure survival of their sacred fish.

Salmon are central to the Tulalip Tribes

Terry Williams is blunt when he describes the environmental crisis tribes in the Pacific Northwest are facing: "We’ve lost 90 percent of the salmon population."

As the Tulalip Tribe’s Fisheries and Natural Resources Commissioner, Williams has witnessed the decline of salmon and its impacts on tribal members. For the Tulalip and other tribes in the region, the population crash of salmon is much more than an assault on their economic lifeblood—it is a cultural and spiritual threat to their identity as a people.

The annual springtime Salmon Ceremony puts tribal members in direct touch with their ancestors, and other ceremonies and practices center on the fish through the year. Losing the fish is a strike to the core of the Tulalip people, but they have a long-term vision to restore wild salmon populations to levels that will support their fishing needs.

Threats throughout the salmon life cycle

The salmon life cycle occurs in a chain of connected environments: stream, estuary, nearshore, and ocean. If these environments are not maintained in a healthy state, salmon populations can decline.

Salmon are vulnerable to environmental threats in all phases of their development: of all the salmon eggs that hatch in the wild, experts estimate that just two percent will survive to adulthood. After hatching in a freshwater stream, salmon fry travel downstream through shallow streams and rivers until they reach an estuary. During this phase, which can take from hours to years, the fry are vulnerable to land-based sources of pollution, as well as the increasing impacts of climate change—higher air temperatures and changes in the timing and amounts of precipitation are resulting in higher water temperatures and variable flow in streams.

Once salmon fry enter brackish estuaries, they make the change from living in freshwater to living in saltwater. After maturing in the ocean—where they face other threats—adult salmon return to the streams where they hatched and swim upstream to spawn. In this final phase, they again face the threats of pollution, warming streams, and variable flow. 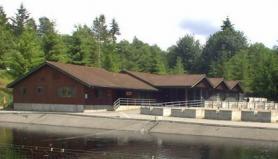 The magnitude of the combined threats to salmon can seem too pervasive for any response to be effective, but that hasn’t stopped regional tribes from acting where they can. The Tulalip Tribe’s Bernie Kai-Kai Gobin Hatchery (see link in sidebar) raises and releases three species of salmon. These provide fishing opportunities for tribal members and also contribute to commercial and sport fisheries in Washington and British Columbia. Because many wild salmon runs are currently depressed or endangered, having a reliable return of hatchery salmon enables tribal members to fish for ceremonial, subsistence, and commercial purposes. The availability of hatchery fish also reduces the pressure of potential overharvesting of wild salmon from runs that require protection.

Fisheries managers identified pollution from manure runoff at local dairy farms as a major cause of salmon mortality. Historically, many farmers held the view that tribal fishing rights imposed limits on their farms and increased operation costs. The Tulalip Tribes sought a mutually beneficial solution to resolve this conflict. 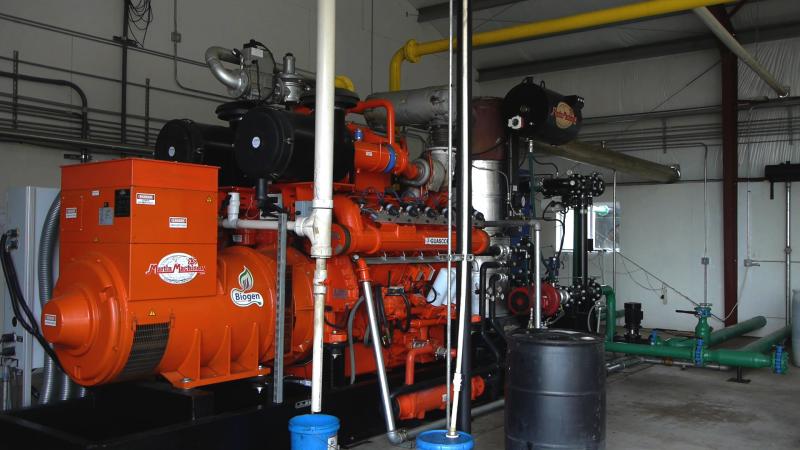 The Tulalip Tribes' Quil Ceda Power Bio-Gas Project led to the construction of a 450-kw biodigester and the formation of Qualco Energy.

Collaboration among the Sno/Sky Agricultural Alliance, Northwest Chinook Recovery, and Tulalip Energy Corporation eventually established Qualco Energy as a shared energy cooperative. The group arranged for area farmers to collect livestock manure and agricultural waste in tanks, keeping it out of the streams. The waste products are then fed into an anaerobic biodigester to generate methane gas. The clean-burning methane is sold to produce green energy, and the digester effluent is stored in lagoons and returned to the farmers for irrigating their fields. The salmon-friendly energy is then sold to the Snohomish County Public Utility District.

Qualco Energy is seeking markets for by-products of this process. The project generates a profit, and the funds are used to maintain the facility. The cooperative has plans underway to expand capacity, and to provide training for other tribes and farmers in the region. They hope to encourage development and operation of small-scale anaerobic digesters, and to acquire farmlands around the plant for tribal food needs.

The success of the biodigester initiative created a base of trust between local farmers and the Tulalip Tribes. In 2010, these groups collaborated to launch the Sustainable Lands Strategy (SLS) to build resilience through cooperative planning at the basin scale. The SLS mission is to generate net gains in the productivity and sustained health of fish and farm communities, while improving flood control, tribal culture and traditional knowledge, and environmental quality. The collaboration works by ensuring that the group makes consensus decisions in a transparent manner. Over time, SLS has expanded to include a range of partners (see the list in the sidebar at right, under Partners). Participants act in non-regulatory roles as they evaluate potential actions that may impact or benefit both farmers and salmon. 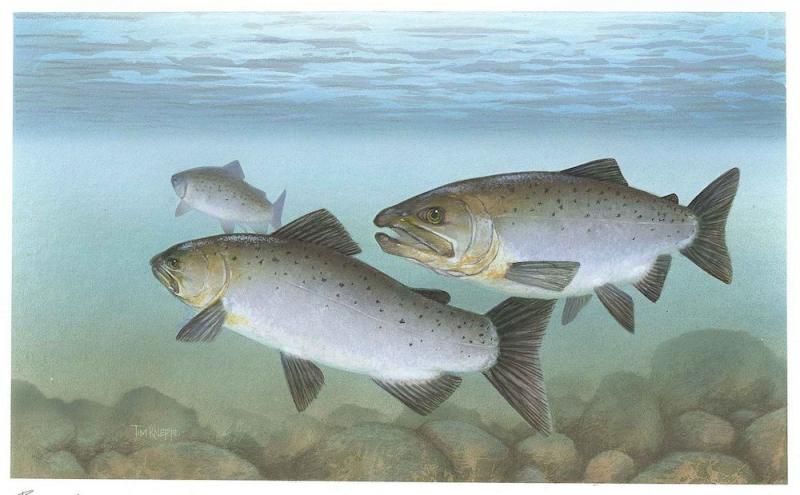 For Tulalip Tribe members—who honor the sacred fish in the spring Salmon Ceremony—salmon fishing is not simply a sport, but a way of life. The fish, in turn, brings them in touch with their ancestors and spiritual knowledge.

Of many SLS breakthroughs, one has been the establishment of active riparian buffers that provide co-benefits to farmers and salmon habitat. Farmers receive support to build "living fences" of trees along the riparian corridors. The trees serve as a defensive barrier against damage to farms from debris during floods, and they also provide a substrate for secondary plantings. The secondary plants generate non-timber riparian products and also provide protection of in-stream salmon habitat. The farmers, tribal staff, hydrologists, and ecologists involved in this project developed a detailed local flood map of farming areas in the Snohomish basin. Their resulting Floodplains by Design approach (see link in sidebar, under Additional Resources) encourages voluntary buyouts or land swaps to move farming operations off of relatively unproductive or poorly drained farmlands at risk of flooding. These lands are converted back into healthy, continuous riparian zones. This process results in improved water quality, and also provides shade over streams to protect salmon by keeping the water cooler than it would be with direct sun.

To enhance environmental decision making, the Tulalip Tribes—with the support of Earth Economics and the Gund Institute for Ecological Economics at the University of Vermont—developed the "Multi-Scale Integrated Model of Ecosystem Services" (MIMES).1 This strategy employs a series of meetings among local experts and traditional knowledge holders. Together, the groups compile and organize information on ecosystem services and their trade-offs (e.g., between wind energy development, forage-fish fisheries, and benthic habitat disturbance), and use it to generate a narrative document. The narrative, accompanied by citations of the scientific background that supports it, sets the framework for scenarios related to specific management decisions. 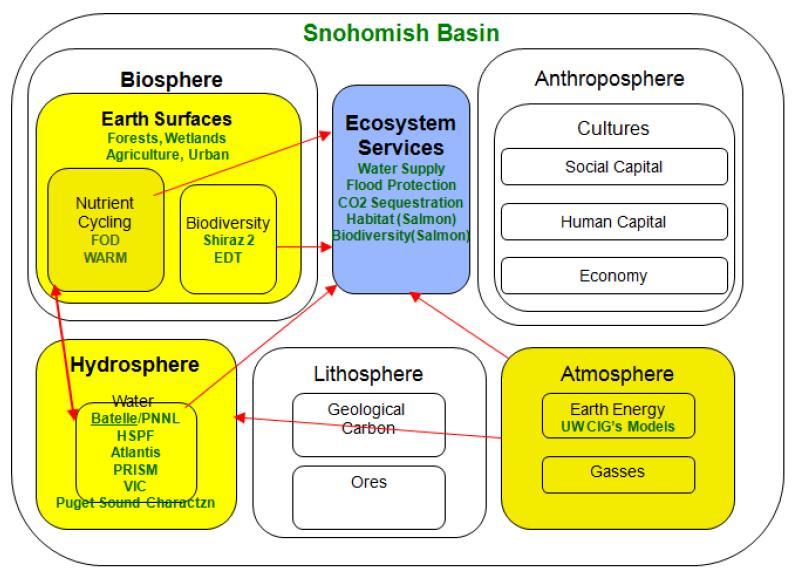 The Tulalip Tribes, working with Earth Economics, has used the MIMES model to develop a long-term carbon budget for the Snohomish Basin in order to assist in climate mitigation and adaptation planning. The next planned phase of the project is to model the trade-offs of manager measures for carbon sequestration on tribal cultural resources, and the use of traditional knowledge to provide information for generating scenarios of adaptation actions and their trade-offs between ecosystem services and cultural resource values.

The approach incorporates hydrology, biogeophysical factors, ecosystem processes and functions, and habitat conditions modeled using various assumptions about the relationship between the variables and the ecosystem services trade-offs. MIMES has been used to develop a long-term carbon budget for the Snohomish Basin in order to assist in climate mitigation and adaptation planning.1 The next phase will model the trade-offs of manager measures for carbon sequestration on tribal cultural resources, and the use of traditional knowledge to provide information for generating scenarios of adaptation actions and their trade-offs between ecosystem services and cultural resource values.

Time is the enemy

"Time is the enemy," says Tulalip Watershed Policy Analyst Preston Hardison. The reasons are many: legal, political, cultural, and spiritual. "The tribes are fixed by treaty, by their ancestors, and by their relationships to the land. They can’t move. If species move away from tribal territories, they’re lost to the tribe. This is why we have to act quickly to restore the health of the ecosystems, to keep as many species at home as possible in the face of of climate change.”