After most of the city was flattened by a tornado, Joplin, Missouri’s Mercy Hospital built a new facility, incorporating features to reinforce its resistance to wind.

An analysis of wind speed trends in the United States indicates that storms in the Midwest will become more frequent and intense in the coming years, according to the Third National Climate Assessment. Contingency planning for such extreme events is vital, as was demonstrated when a catastrophic EF-5 tornado struck the city of Joplin and portions of Jasper and Newton Counties in southwest Missouri on Sunday, May 22, 2011.

With winds over 200 miles per hour, the 3/4-mile wide tornado cut a six-mile swath of destruction through central Joplin, causing 161 fatalities and approximately 1,371 injuries. It was the deadliest U.S. tornado since 1947. Thousands of structures were destroyed or damaged, including single-family homes, apartment buildings, retail stores, and St. John’s Regional Medical Center (now known as Mercy Joplin). 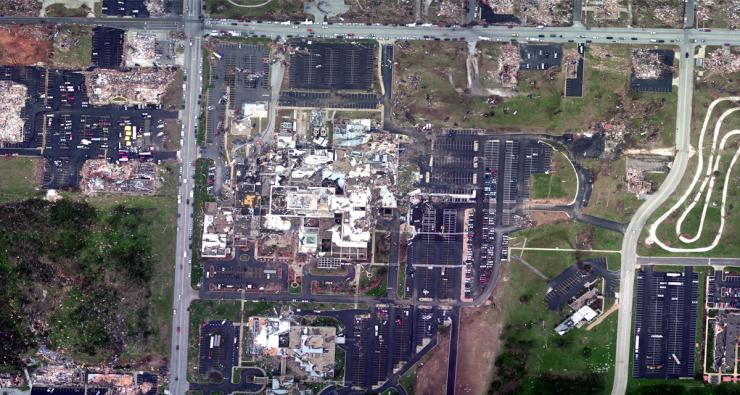 Aerial photo of destruction caused by a tornado on May 22, 2011, in Joplin, Missouri.

Responding in the face of disaster 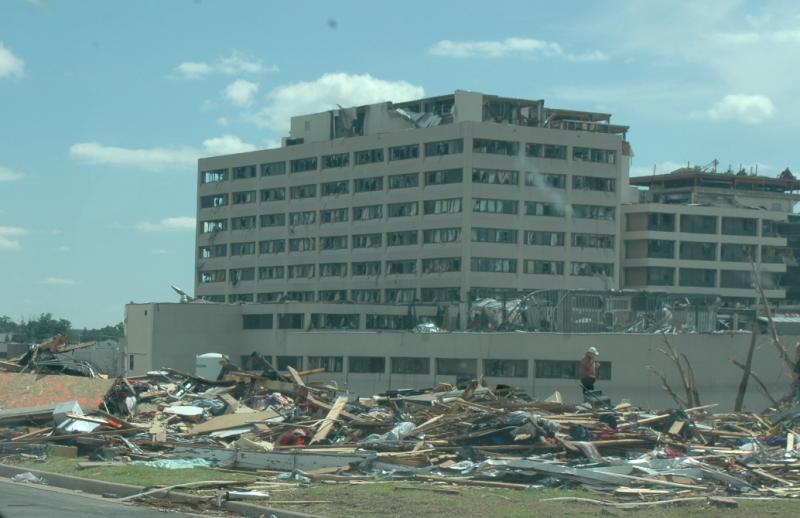 Damage at St. John’s Regional Medical Center caused by the May 22, 2011, tornado.

The hospital took a direct hit from the tornado. Windows were blown out, generators were destroyed, and roof-mounted equipment, as well as the roof itself, was dislodged. The immediate priority at Mercy Hospital was a complete hospital evacuation. Clinical and non-clinical staff used everything at hand (wheel chairs, backboards, mattresses, doors, etc.) to evacuate visitors and the 183 patients, dodging debris along the way. The evacuation was completed in 90 minutes. Nevertheless, five critical-care patients and one visitor died.

Providing care in the aftermath

Freeman Health System—a nearby hospital that escaped a direct hit from the storm—was able to provide support. Though Freeman was completely dependent upon generator power because of utility outages, Mercy Hospital patients who were in critical condition were transferred to the neighboring hospital. All Freeman staff were needed, but because it was Sunday, operating room staff and surgeons were not on site. Compounded by the arrival of new patients, this staffing shortage quickly turned into a problem: within four hours of the tornado, between 70 and 100 ambulances had arrived and an estimated 400 patients were in triage areas, with an additional 120 patients in the emergency room. Within 12 hours of the disaster, water pressure had dropped, and Freeman prepared for an extended water outage.1 Within a week, workers had established a 60-bed temporary field hospital in the parking lot of the destroyed Mercy Hospital facility.

Work on a replacement Mercy Hospital began in 2012, and the facility opened in March of 2015. With the 2011 storm still fresh on everyone’s minds, architects designed the new building to better withstand future extreme weather events. 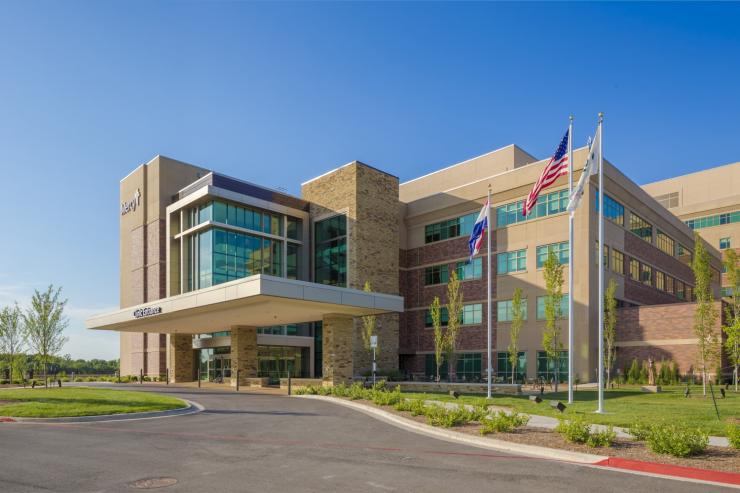 Mercy Hospital Joplin, which opened in March 2015. The new hospital is a "storm-hardened" facility with a precast concrete shell, windows that can withstand high winds, and partially buried generators for backup power in an emergency.

The new hospital features two underground levels, with eight levels above ground. Critical care areas—such as intensive care and neonatal intensive care—are outfitted with windows designed to resist 250 mile-per-hour winds. Contrary to current common practice, the new facility's central utility plant is housed in a stand-alone “hardened” building, rather than in a pre-engineered, lightweight metal structure. Either of the two generators housed within the building can independently provide enough power for the entire hospital. Additional safety features include a reinforced building core and interior stairwells with emergency lighting, multiple elevator banks that minimize the risk of wind damage disabling all elevators, and an independent water service. The hospital anticipates that these features will provide protection for patients, staff, and visitors during future emergencies, improving the resilience of the hospital and community.