Increasing humidity and precipitation and rising extreme temperatures are having negative impacts across the Midwest. Integrating climate adaptation into planning processes can help build adaptive capacity to increase climate resilience. 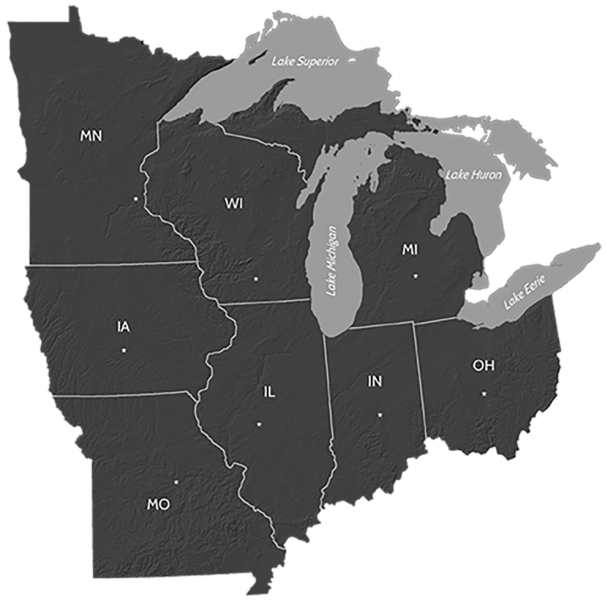 The Midwest is home to more than 60 million people. While the region is probably best known for its agricultural production, it also boasts vibrant manufacturing, retail, recreation, tourism, and service sectors. In addition to its vast tracts of agricultural land, the Midwest includes large tracts of federal, state, and private forests and preserves. Densely populated urban areas include Chicago, Cleveland, Columbus, Detroit, Indianapolis, Milwaukee, Minneapolis-St. Paul, and St. Louis.

Trends toward warmer, wetter, and more humid conditions provide challenges for agricultural field work, increased pressure from disease and pests, and reduce agricultural yields. These challenges may reach the extent that they can be only partially overcome by technology. These trends also amplify the effects of existing stressors such as invasive species, insect pests, and plant disease on the region’s natural resources. Natural resource managers are taking steps to address these issues by increasing the diversity of trees and introducing species suitable for a changing climate. 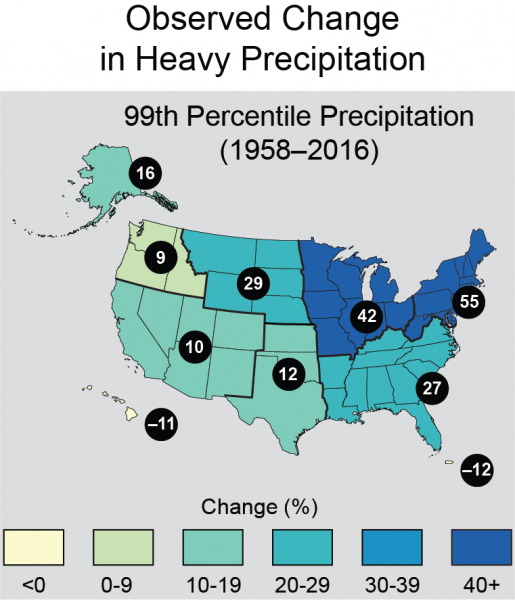 Midwest highways, railroads, airports, and navigable rivers are major modes for commercial activity. Increasing precipitation, especially heavy rain events, has increased the overall flood risk, causing disruption to transportation and damage to property and infrastructure. Use of green infrastructure and better engineering practices are beginning to address these issues.

Despite the trend towards wetter conditions in the Midwest, increasing temperatures and potential changes in the seasonality of precipitation (i.e., less in the summer), may lead to continued drought issues in the future—in particular, the development of flash drought, where high temperatures and a lack of normal rainfall in the summer can lead to the rapid depletion of soil moisture. Drought creates significant challenges for many sectors, including agriculture, navigation, transportation, ecosystems, and water utilities.

Portions of Michigan, Wisconsin, and Minnesota contain ceded territory of many tribes, which are used for hunting, fishing, and gathering native plants—all of which play vital roles in maintaining cultural heritage. Projected changes in climate and ecosystems will have strong impacts on these activities.

The Great Lakes play a central role in the Midwest, where they provide an abundant freshwater resource for water supplies, industry, shipping, fishing, and recreation, as well as a rich and diverse ecosystem. The same can be said for the upper Mississippi, lower Missouri, Illinois, and Ohio River systems. Episodes of widespread heavy rains in recent years have led to flooding, soil erosion, and water quality issues from nutrient runoff into those systems. Land managers are beginning to change some of their practices to better manage excess surface water. For more information on regional impacts of a changing climate on the Great Lakes, see the Great Lakes section of this site.

Citizens and stakeholders in the Midwest value their health and the well-being of their communities—all of which are at risk from increased flooding, increased heat, drought and lower air and water quality under a changing climate.

Energy in the Midwest

Wind power is a small but growing source of electricity for the region. Iowa leads the nation in per capita consumption of wind power, with wind providing over 30 percent of the state’s electrical needs in 2015.

To learn more about the impacts of climate change and variability and building climate resilience in the Midwest, visit these pages: