The Midwest produces a substantial portion of food and animal feed for national consumption and international trade. Without major advances in agricultural technology and culture, changes that are already occurring and projected to continue will reduce overall productivity of the region.

Corn and soybeans are the Midwest’s two main commodity crops, grown on 75 percent of the region’s arable land. Wheat and oats, grown on fewer acres, are also important, and an increasing number of speciality crops with higher values—including apples, grapes, cherries, cranberries, blueberries, and pumpkins—are grown in the region. 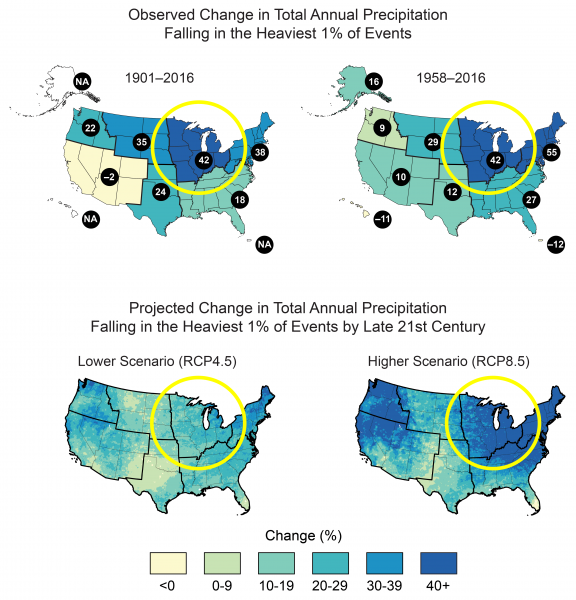 Heavy precipitation is becoming more intense and more frequent across most of the United States, particularly in the Northeast and Midwest, and these trends are projected to continue in the future. Click image for a larger view.

Increased rainfall from April to June over the past 30 years—the single trend with the highest impact on agriculture in the Midwest—has reduced flexibility for the timing of spring planting, increased soil erosion, and sparked elevated levels of mold, fungi, and toxins.

Daily minimum temperatures have also increased in all seasons, in part due to increasing humidity. Higher humidity decreases the day–night temperature range and increases warm season precipitation. Rising humidity also leads to longer dew periods and high moisture conditions that favor many agricultural pests and pathogens for both growing plants and stored grain. Increases in spring humidity through mid-century are expected to increase rainfall, which will increase the potential for soil erosion and further reduce planting-season work days due to waterlogged soil. 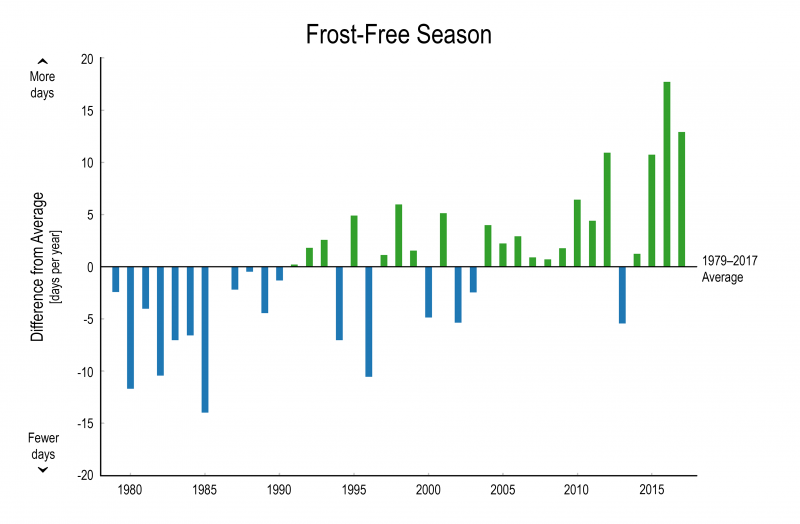 Warm-season temperatures are projected to increase more in the Midwest than any other region of the United States. The length of the frost-free season is projected to increase by 10 days early this century and be up to a month longer by late century. Generally, longer growing seasons favor agricultural production. However, warming winters increase the survival and reproduction of insect pests and are enabling a northward range expansion of new pests and crop pathogens into the Midwest. By mid-century, higher growing-season temperatures are expected to decrease overall yields.

Increases in growing-season temperature in the Midwest are projected to be the largest contributing factor to declines in the productivity of U.S. agriculture. Projections show that surface soil moisture in the Midwest will likely transition from excessive levels during spring—due to increased precipitation—to levels that are insufficient to support growth during summer. Driven by higher temperatures, increased evaporation will reduce moisture levels. Projections of mid-century yields show declines of 5 percent to more than 25 percent across the region for corn and more than 25 percent for soybeans in the southern half of the region, with possible yield increases in the northern half of the region.

Declines in wild rice production—an annual plant harvested by, and culturally important to, tribes—are expected, stemming from increases in climate extremes, climate-related disease, pest outbreaks, and northward shifts of growing regions. Unsheltered perennial crops such as tree fruits may be increasingly subjected to untimely budbreak. Without adaptive actions, breeding success and production of milk and eggs will be reduced due to projected temperature extremes by mid-century.

Integrating strips of native prairie vegetation into row crops has been shown to reduce sediment and nutrient loss from fields, as well as improve biodiversity and the delivery of ecosystem services. The inset shows a close-up example of a prairie vegetation strip. Click the image for more information.

To reduce the vulnerability of overall agricultural production, more diversity can be used in planting dates, pollination periods, chemical use, and crop and cultivar selection.

No strategies currently are available for maintaining historical trends in commodity agriculture production to cope with increases in spring rainfall and summer heat waves projected for mid-century.

To learn more about climate impacts to agriculture, visit the Food topic.