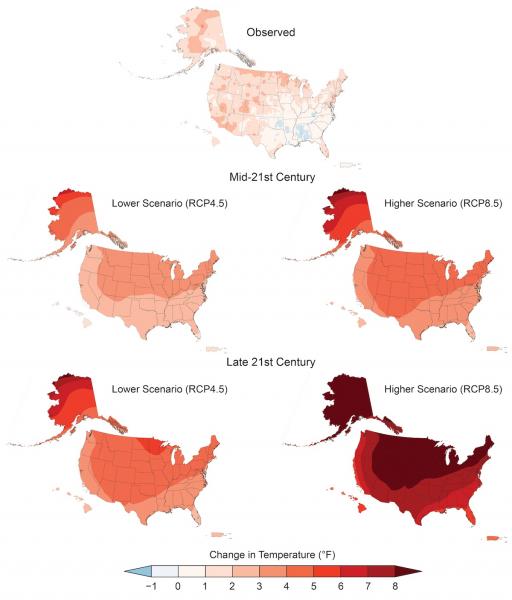 Annual average temperatures across North America are projected to increase, with proportionally greater changes at higher latitudes as compared to lower latitudes, and under a higher scenario (RCP8.5, right) as compared to a lower one (RCP4.5, left). Click the image for a larger view.

Climate change has the potential to adversely impact agricultural productivity at local, regional, and continental scales. 1 Crops and livestock are exposed to increasing daytime and nighttime temperatures, changing precipitation patterns, more frequent weather extremes, and changing pressures from weeds, pests, and diseases. 1 Though the impact of these changes in specific regions of the United States remains uncertain, producers can adapt to new conditions through planting decisions, management practices, and use of technology. 1

Changes in temperature, precipitation, and extreme weather will affect crop, livestock, and fisheries yields, as well as decisions regarding requirements for safe food handling and storage methods necessary to prevent spoilage. The infrastructure required to reliably and efficiently transport food will also be affected. Combined, these factors will influence availability and affordability of food products, posing particular challenges for underdeveloped countries coping with food insecurity. 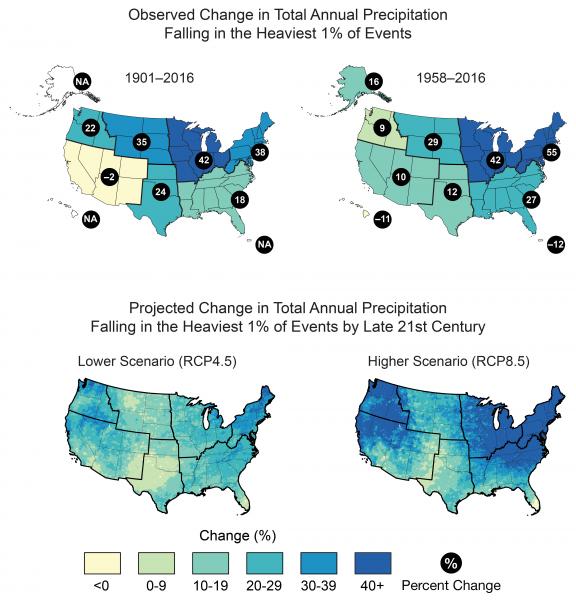 Heavy precipitation is becoming more intense and more frequent across most of the United States, particularly in the Northeast and Midwest, and these trends are projected to continue in the future. This map shows the observed (top; numbers in black circles give the percentage change) and projected (bottom) change in the amount of precipitation falling in the heaviest 1% of events (99th percentile of the distribution). Click the image for a larger view.

To many American consumers, food production seems uncomplicated—they see only the products that end up on grocery store shelves. The reality, however, is far from simple. The food system is a complex web of interactions among producers, processors, distributors, and consumers.2 Climate and weather affect the entire food system. For example, precipitation can influence crop and livestock productivity, temperature can determine spoilage rates and contamination, and storms can impact transportation infrastructure. Each of those effects can combine to influence food prices.

Agricultural producers have been continuously improving plant and animal varieties. Management regimes today maximize productivity under contemporary climatic conditions and weather patterns that had been relatively stable from the birth of the United States up to the widespread use of fossil fuels. Similarly, food processors and distributors have fine-tuned their operations to minimize food loss and maximize profitability under historic climate conditions and weather patterns. Climate change, however, is shifting those baseline conditions and variability uniquely in each region of the globe. Where those shifts have negative impacts, food producers, processors, and distributors will have to adapt their operations to remain profitable and consumers may have to adjust their behavior to continue to receive safe and nutritious food. The ability to adjust to climate variability and change through alterations in behavior, technology, and resources is known as “adaptive capacity.” 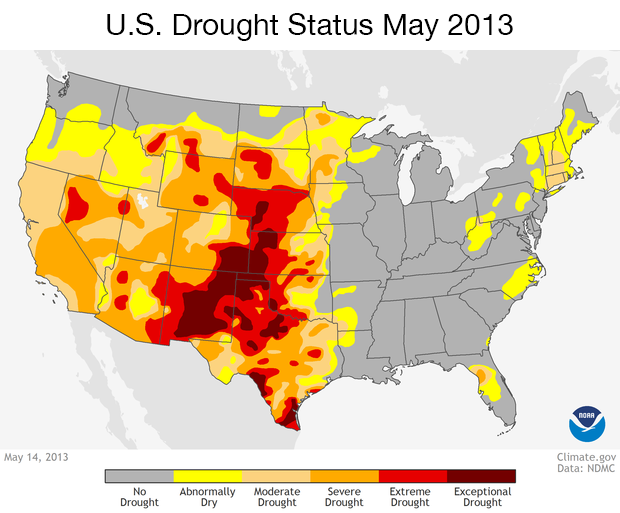 This map shows drought status across the contiguous United States on May 14, 2013. Colors on the map indicate areas that are abnormally dry (light yellow) or experiencing some level of drought. For areas in drought, the darker the color, the more severe the drought. Approximately 48 percent of the contiguous United States was in some level of drought on this date according to the U.S. Drought Monitor. An additional 14 percent was classified as abnormally dry.

The U.S. food system as a whole has a high adaptive capacity because of our access to knowledge, technology, and capital. Despite our capabilities, however, yields of major U.S. crops and farm returns are projected to decline by mid-century3, and processors and distributors will face challenges both from climate change and rising energy prices.3 Developing countries are especially vulnerable to climate change because of low adaptive capacity, and because many are in geographic locations that are expected to be hit the hardest by climate change’s physical effects.4