Climate change impacts increase the vulnerability of at-risk communities in the Midwest; tribal nations are especially vulnerable because of their reliance on threatened natural resources for their cultural, subsistence, and economic needs. Integrating climate adaptation into planning processes offers an opportunity to better manage climate risks now.

Risk-based approaches that assess vulnerabilities and include effective planning and implementation of adaptation options help communities mitigate and better respond to the impacts of a changing climate. These approaches rely on community participation to manage risk and to monitor and evaluate adaptation actions. However, documented implementation of climate change planning and action in Midwest communities remains low.

Attempts to assess vulnerabilities, especially for poor urban communities, face persisting environmental and social justice barriers—such as lack of participation and historical disenfranchisement—despite evidence that these communities are going to be disproportionately affected by climate impacts. A lack of political and financial support at the state and federal levels is another barrier to adaptation action in cities and counties.

Work on estimating the cost of adaptation nationally—and in the Midwest—remains limited, even though the EPA has estimated that the Midwest is among the regions with the largest expected damages to infrastructure. This includes the highest estimated damages to roads, rising from $3.3 billion per year in 2050 to $6 billion per year in 2090 (in 2015 dollars) under a higher emissions scenario, and the highest number of vulnerable bridges.

Collaboration and interaction among producers of climate information (e.g., universities and research institutes), intermediaries (e.g., information brokers and organizations), and end users (e.g., city planners and natural resource managers) is critical in increasing the integration and use of climate knowledge for adaptation.

Organizations such as the Great Lakes Integrated Sciences + Assessments (GLISA) and the Wisconsin Initiative on Climate Impacts and research projects such as Useful to Usable (U2U) have created climate scenarios, decision support tools, and climate data that promote the joint development of usable climate information. Strategies implemented as a result of these collaborations, including the use of green infrastructure and water conservation efforts, are helping to reduce sensitivity to the impacts of climate change in the Midwest. Binational partnerships between the U.S. and Canada, in support of the Great Lakes Water Quality Agreement, also support the production of useful climate information. These organizations, however, face challenges, including high costs of interacting with users, contextualizing and customizing climate information, and building trust.

Tribes and indigenous communities in the Midwest have been among the first to feel the effects of climate change as it impacts their culture, sovereignty, health, economies, and ways of life. 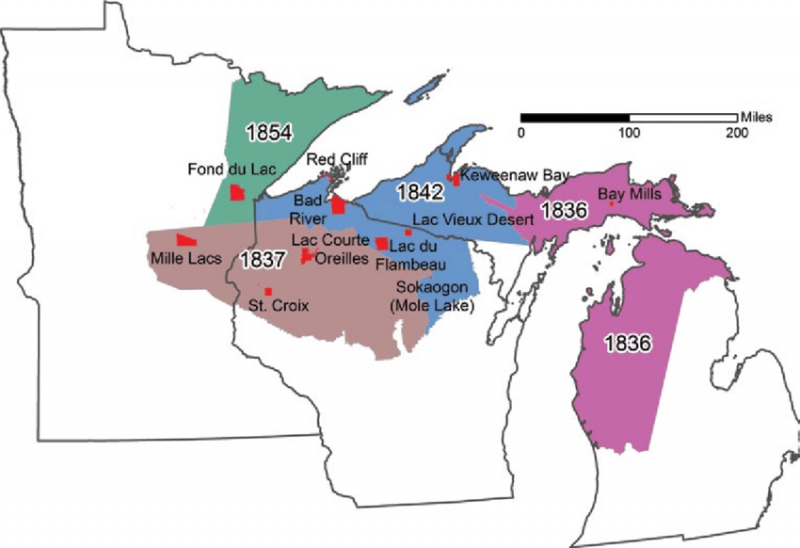 For example, the Midwest contains ceded territory—large swaths of land in Minnesota, Wisconsin, and Michigan in which Ojibwe tribes reserved hunting, fishing, and gathering rights in treaties with the United States government. Climate change presents challenges to the Ojibwe tribes in co-managing these resources with other land managers; as the climate changes, various species utilized by tribes are declining and may shift entirely outside of treaty boundaries and reserved lands.

In certain tribal cultures, all beings (species) are important; climate adaptation efforts that favor certain beings at the detriment of others can be problematic. Adaptation to climate change might also mean giving up on something deeply embedded in tribal culture for which no substitute exists. A family sugarbush (a forest stand used for maple syrup), for example, cannot be replaced culturally, spiritually, or economically if the sugar maple range were to shift outside of treaty or reservation boundaries.

Tribal nations across the United States, including in the Midwest, are developing adaptation plans that bring together climate data and projections with the Traditional Ecological Knowledge (TEK) of tribal members. Indigenous oral history often contains a knowledge of local ecosystems, not found in books, that can be used to understand and document the changes that are occurring. Climate change effects are not typically immediate or dramatic because they occur over a relatively long period of time, yet tribal elders and harvesters have been noticing changes—such as declining numbers of waabooz (snowshoe hare)—that Scientific Ecological Knowledge may have been slower to document. The TEK of elders and harvesters can provide a valuable and nuanced understanding of ecological conditions on a smaller, more localized scale. Integrating this TEK with Scientific Ecological Knowledge in climate change initiatives provides a more complete understanding of climate change impacts, and community input to tribal adaptation plans ensures that TEK can be used to produce adaptation strategies that are trusted by community members.