Adapted from the Third and Fourth National Climate Assessments

Of the 5.2 million American Indians and Alaska Natives registered in the U.S. Census, approximately 1.1 million live on or near reservations or native lands, located mostly in the Northwest, Southwest, Great Plains, and Alaska, although indigenous communities can be found throughout the U.S. Climate change poses particular threats to indigenous culture, well-being, and ways of life in every region of the United States. 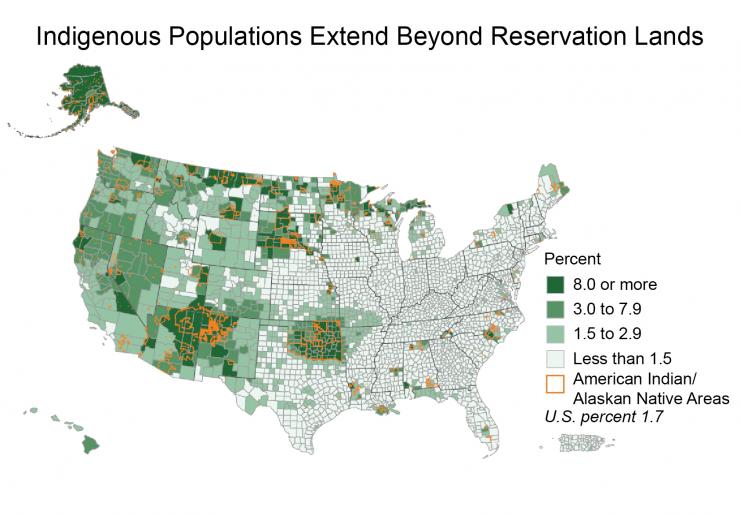 Census data show that American Indian and Alaska Native populations are concentrated around, but are not limited to, reservation lands like the Hopi and Navajo in Arizona and New Mexico, the Choctaw, Chickasaw, and Cherokee in Oklahoma, and various Sioux tribes in the Dakotas and Montana. Click on the graphic for more information.

Chronic stresses such as extreme poverty are being exacerbated by climate change impacts: these impacts include reduced access to traditional foods, decreased water quality, and increasing exposure to health and safety hazards. In Alaska, Maine, the Pacific Northwest, and other coastal locations, erosion and inundation related to climate change are so severe that some communities are already relocating from historical homelands to which their traditions and cultural identities are tied.

Climate change impacts Tribal Nations' access to traditional foods. Fare such as salmon, shellfish, crops, and marine mammals have provided sustenance as well as cultural, economic, medicinal, and community health for countless generations. Some plants used for medicines and food are becoming increasingly difficult to find, or are no longer found in historical ranges.

This photo, from the Local Environmental Observer (LEO) Network, shows hanging caribou meat along the Kobuk River, north of Kiana, Alaska, in September 2010. Click on the photo for more information.

A key uncertainty is how indigenous people will adapt to climate change, given their reliance on local, wild foods and the geographic isolation of some communities. For example, increased wildfire frequency and intensity due to fuel loading brought on by drought and other factors may affect tribal homes, safety, economy, culturally important species, medicinal plants, traditional foods, and cultural sites. Additionally, tribes have varying levels of preparedness and some have a limited ability to cope with extreme events.

Impacts on ecosystems and water quality and quantity 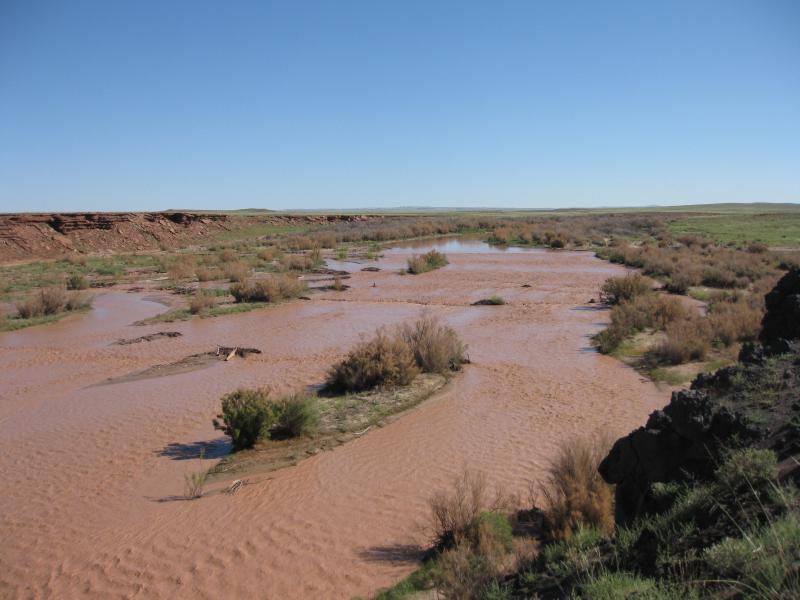 The Little Colorado River on the Navajo Nation. Click on the photo for more information.

Climate change also affects the integrity and stability of the ecosystems on which indigenous peoples depend by altering ecosystem processes and biodiversity. Ecosystems provide a rich array of benefits and services including habitat for fish and wildlife, drinking water storage and filtration, fertile soils for growing crops, buffering against a range of stressors, and aesthetic and cultural values. Changes in these resources have social, cultural, and economic effects on native communities in particular. Events such as droughts, floods, wildfires, and pest outbreaks associated with climate change (for example, bark beetles in the West and Alaska) are already disrupting ecosystems. In the longer term, there is increasing risk of species extinction, which could be particularly devastating to native communities reliant on specific species for food, medicine, and ceremonies.

In August and September 2012, sea ice covered less of the Arctic Ocean than any time since the beginning of reliable satellite measurements (1979). The long-term retreat of sea ice has occurred faster than climate models had predicted. The average minimum extent of sea ice for 1979–2000 was 2.59 million square miles. The image on the left shows Arctic minimum sea ice extent in 1984, which was about the average minimum extent for 1979–2000. The image on the right shows that the extent of sea ice had dropped to 1.32 million square miles at the end of summer 2012. Alaska Native coastal communities rely on sea ice for many reasons, including its role as a buffer against coastal erosion from storms.

In turn, these climate-driven changes increase the number of serious problems for Alaska Native populations. Issues include injury from extreme or unpredictable weather and thinning sea ice, which can trap people far from home; changing snow and ice conditions that limit safe hunting, fishing, or herding practices; malnutrition and food insecurity from lack of access to subsistence food; contamination of food and water; increasing economic, mental, and social problems from loss of culture and traditional livelihood; increases in infectious diseases; and the loss of buildings and infrastructure from permafrost erosion and thawing.

The increased thawing of permafrost (permanently frozen soil) along the coasts and rivers is an especially potent threat to Alaska Native villages because it causes serious erosion, flooding, and destruction of homes, buildings, and roads from differential settlement, slumping, and/or collapse of the underlying base. As of April 2015, more than 30 Native Villages in Alaska are either in need, or are already in the process, of relocating their entire village. In addition, permafrost thaw is causing food insecurity in Alaska Native communities due to the thawing of ice cellars or ice houses used for subsistence food storage. This thawing can lead to food contamination and sickness, as well as dependence upon more expensive, less healthy, non-traditional “store-bought” foods. To learn how some North Slope Inupiat are adapting to this challenge, see the case study Inupiaq Work to Preserve Food and Traditions on Alaska's North Slope.

The preceding text was excerpted and adapted from the report Climate Change Impacts in the United States: The Third National Climate Assessment (Chapter 22: Alaska).

Native cultures are directly tied to native places and homelands, reflecting the indigenous perspective that includes the “power of place.” Many indigenous peoples regard all people, plants, and animals that share our world as relatives, rather than resources. Language, ceremonies, cultures, practices, and food sources evolved in concert with the inhabitants, human and non-human, of specific homelands. The wisdom of native people includes songs, dances, art, language, science, and music that reflect these places. By regarding all things as relatives—not resources—natural laws dictate that people care for their relatives in responsible ways. As climate change increasingly threatens Tribal Nations, cultural identities, and practices, documenting the impacts on traditional lifestyles may strengthen adaptive strategies.

Featured Tribal Nations Tools for the Steps to Resilience

Combining ways of knowing to adapt

Recent examples where traditional knowledges and new approaches are used together to address climate change and related impacts include:

Except where noted, the preceding text was excerpted and adapted from the report Climate Change Impacts in the United States: The Third National Climate Assessment (Chapter 12: Indigenous Peoples, Lands, and Resources).

To learn more about how Tribal Nations are effectively addressing the impacts of climate change, visit the subtopic pages:

Banner Image Credit:
Canoes on the 2013 Canoe Journey to Quinault—stopped for the night near Queets on the Pacific coast—before heading back out onto the ocean for Quinault the next day. Image credit: Larry Workman, Quinault Indian Nation. Used with permission
Last modified:
28 September 2020 - 9:55am