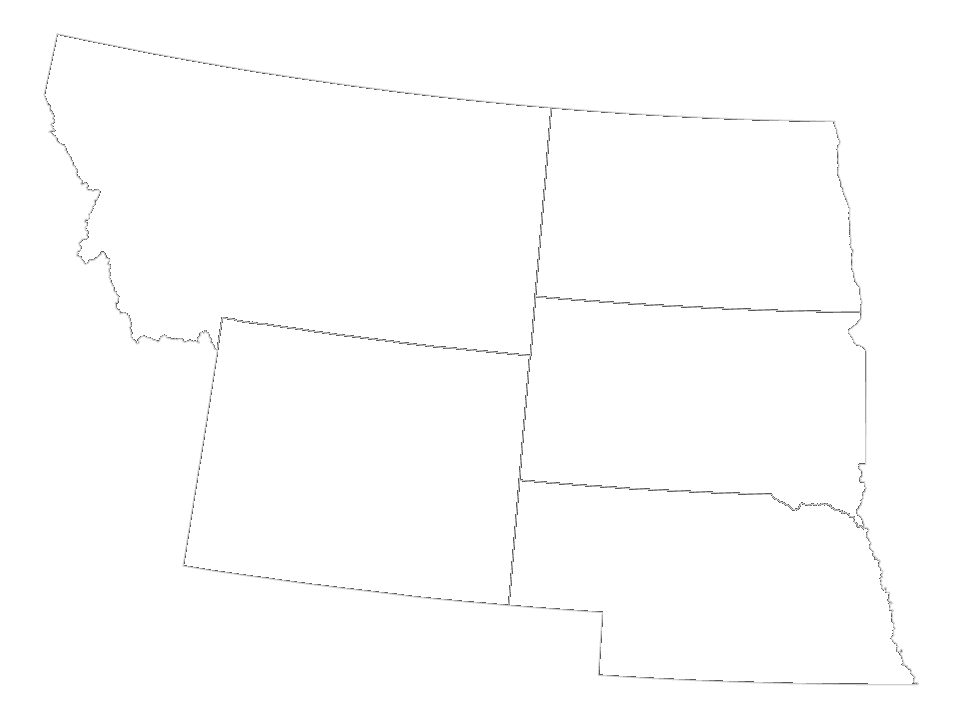 Increasing temperatures, changing precipitation patterns, and extreme events are posing challenges to the water-limited region of the Northern Great Plains. Mitigation and adaptation will be critical to the people and sectors of the region. 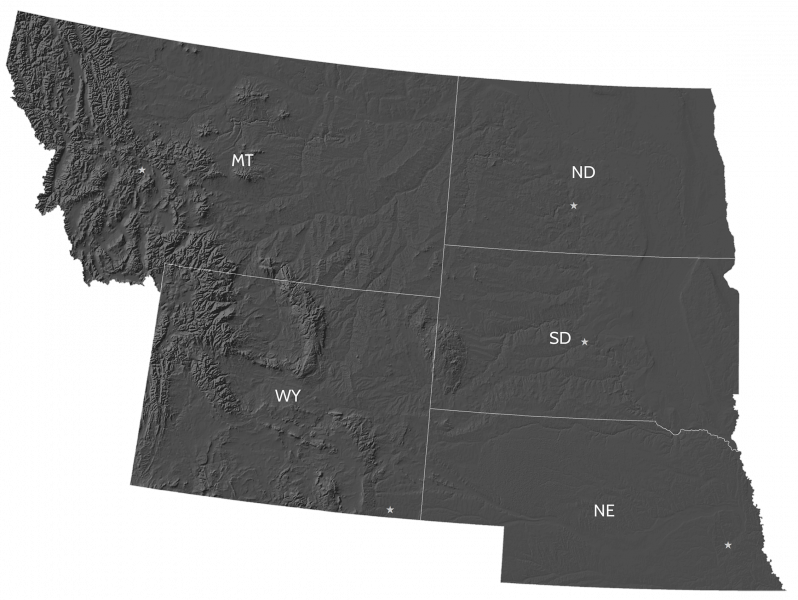 The Northern Great Plains region. Click on the image for a larger view and source information.

The Northern Great Plains comprises five states: Montana, Nebraska, North Dakota, South Dakota, and Wyoming. Although it is home to only about five million people, the region is an integral part of the nation’s food supply, with vast tracts of land devoted to dryland and irrigated crops and livestock grazing.

In addition to agriculture, the regional landscape is largely a patchwork of grasslands, wetlands, and the built environment, with heavily forested lands in the mountainous areas of the west. The region is also part of the Central Flyway, with many migratory birds stopping over during their journeys in the spring and fall.

Tribal nations inhabit and manage large land bases and are important decision makers and partners for regional governments. Tribal nations and tribal organizations continue to shape natural resource management, water rights, and energy development, which are all critical to climate adaptation throughout the region and influence policy across the U.S. (see, for example, the Winters Doctrine, the Dakota Access Pipeline protests, and the Keystone XL pipeline).

Water is critical to the Northern Great Plains and variability in seasonal and/or annual precipitation can have big impacts. Both droughts and floods, along with other extreme events, are a common occurrence in the region. 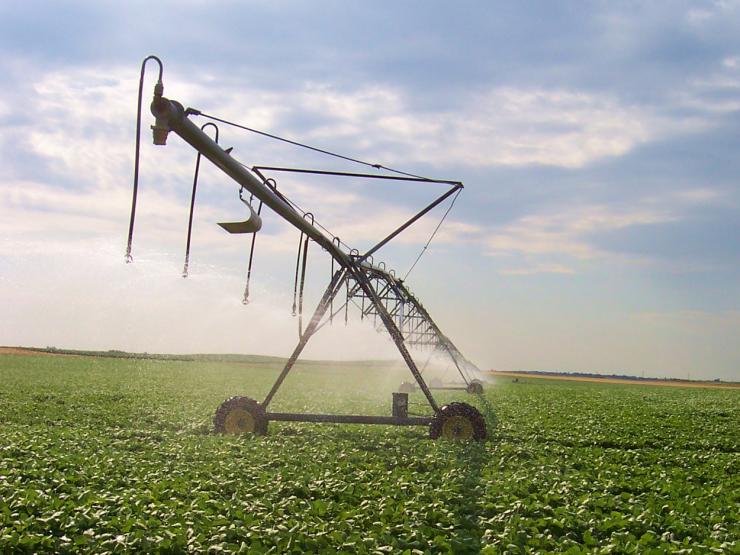 Watering soybeans in Keya Paha County, Nebraska. Each "pivot" is approximately 1,600 feet long and irrigates a quarter section (one quarter of a square mile). Click on the image for a larger view and source information.

With an inherently variable climate, the people of the region have learned to adapt to a range of conditions; however, climate change poses new challenges, especially for the Indigenous peoples of the region whose livelihoods have already been impacted.

Due to its positioning in the land-locked, north-central part of the United States, the Northern Great Plains experiences a highly variable climate, prone to extreme events such as droughts, floods, heat waves, cold waves, blizzards, and severe weather. One of the defining features of the region is its east-west precipitation gradient, where areas in the east routinely receive two to three times the precipitation of areas to the west. This precipitation gradient greatly impacts the landscape, with traditionally tall-grass prairie in the east transitioning to short-grass prairie and sagebrush in the west, and rainfed row crops in the east transitioning to irrigated crops and rangeland in the west.

Another distinct feature of the region is its elevation. Although usually thought of as flat, the region gradually slopes upwards across the plains towards the Rocky Mountains, where there is a dramatic increase in elevation. The Rockies play a critical role in the Northern Great Plains as they feed several of the rivers that flow across the region, providing water for communities, ecosystems, and economic activities. 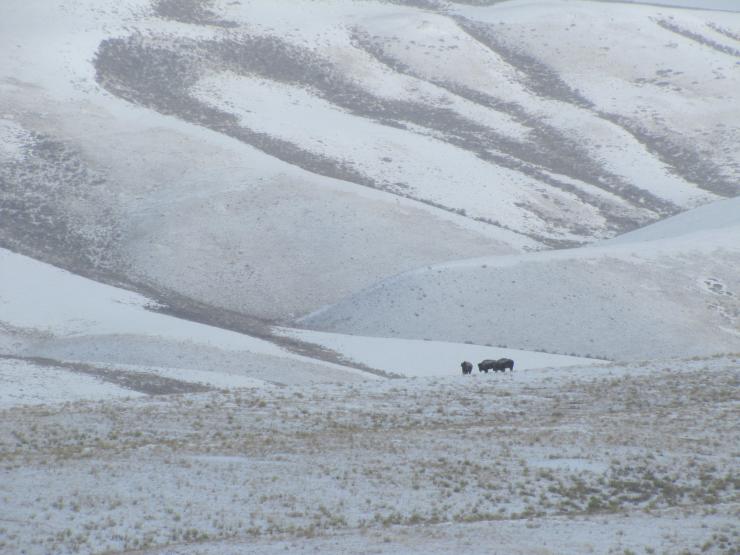 A group of three bison stand on a ridge line on the northern end of the National Elk Refuge near Jackson Hole, Wyoming. Bison are extremely well adapted to winter weather. Click on the image for a larger view and source information.

The region experiences all four seasons, with large differences in temperature and precipitation throughout the year. Although this is typical, it is worth noting that some of the hottest and coldest temperatures in the country have occurred in this region. For the plains portion of the region, the wettest time of the year occurs in the late spring and early summer, while the driest season is winter. Winter is a crucial time for the region, however, as this is when the mountain snowpack builds. Year-to-year differences in the amount of the snowpack or the timing of the melting and subsequent runoff have implications for areas downstream across the plains.

A region in flux 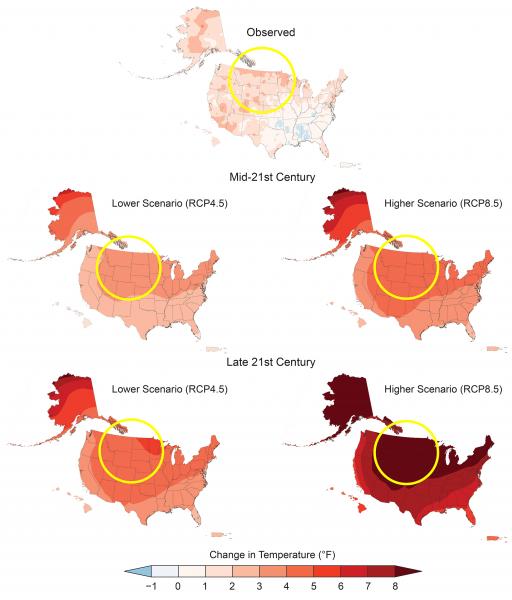 Annual average temperatures across North America are projected to increase, with proportionally greater changes at higher as compared to lower latitudes, and under a higher scenario (RCP8.5, right) as compared to a lower one (RCP4.5, left). The Northern Great Plains region is circled in yellow on each map. This figure compares (top) observed change for 1986–2016 (relative to 1901–1960 for the contiguous United States and 1925–1960 for Alaska, Hawai‘i, Puerto Rico, and the U.S. Virgin Islands) with projected differences in annual average temperature for mid-century (2036–2065, middle) and end-of-century (2070–2099, bottom) relative to the near-present (1986–2015). Click on the image for a larger view and source information.

Although the Northern Great Plains has a highly variable climate, changes are still evident as temperatures are on the rise and precipitation patterns are shifting. Over the past several decades, temperatures in the Northern Great Plains have increased more than any other region in the U.S., with an average warming of 1.7°F.2 Generally, nighttime low temperatures have increased slightly more than daytime high temperatures, and increases are especially pronounced in the winter. Impacts due to increasing temperatures are wide-reaching with many sectors being affected, both positively and negatively. Looking into the future, average temperatures are expected to continue to increase through time. This would be accompanied by decreases in the occurrence of more severe cold waves and increases in the occurrence of more severe heat waves. 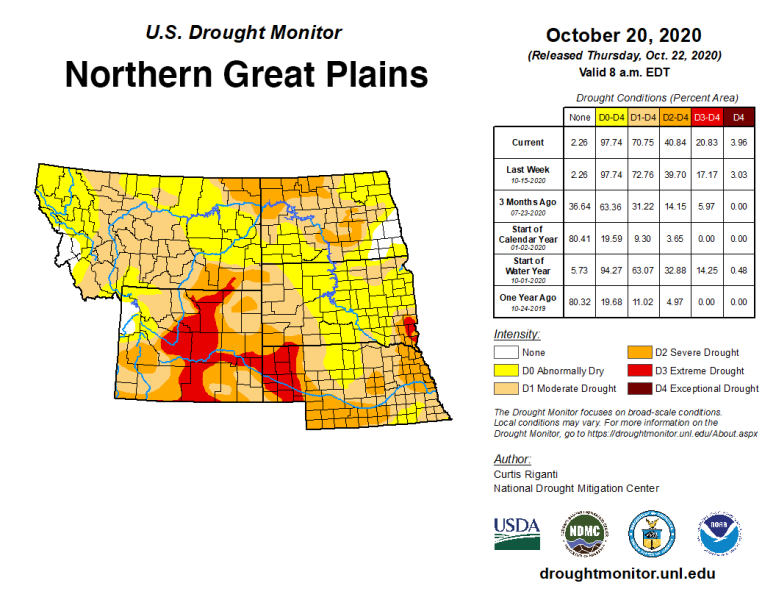 In October 2020, almost every county of the Northern Great Plains was in some level of drought, ranging from Abnormally Dry to Extreme Drought. Click on the image for a larger view and source information.

In recent years, the region has experienced both drought and flooding, even in back-to-back years—such as the flooding of 2011, which was followed by widespread drought in 2012. The 2017 flash drought across northern portions of the region, which was preceded by a near-record wet period, caused severe impacts to agriculture in the plains and large and severe wildfires to the forested lands in the west. Most recently, the extreme wetness of 2019, which resulted in historic flooding, was also followed by the development of drought in 2020.

Increased warming has also impacted the snow season, as higher temperatures have resulted in more rainfall rather than snowfall during the shoulder seasons. In the mountainous areas, changes in the snowpack and subsequent runoff have impacts on both the local and regional scales. Increased warming and earlier snowmelt is also causing earlier onset of spring and altering plant phenology (periodic biological responses, such as plant flowering). Looking to the future, we expect these trends to continue and their magnitude to increase.

The climate is not the only aspect of the Northern Great Plains that is changing. Major alterations to natural conditions have occurred in the region since the early 1800s, which have changed the water cycle and the way nutrients move through the land, water, and air. For instance, the water cycle has been greatly disrupted by the elimination of approximately 90 percent of the region’s beaver population. Removing beaver dams altered the water cycle process, reducing water stored in soil and increasing total runoff. Land use and management changes have also reduced water infiltration and increased runoff through soil degradation, via the loss of organic matter and soil structure. Much of the region’s grasslands have been converted to croplands, resulting in soil carbon loss.3

Restoring balance, where appropriate, is critical to addressing challenges and changes attributed to climate. Below, you can learn more about these changes and their associated impacts, along with the ways in which the Northern Great Plains region is building resilience.

Learn more about the regional assets/resources/services of primary concern on these pages: