The Southwest Region encompasses unique deserts, high-elevation forests and mountain ranges, and coastal and marine ecosystems. Together, the six states in the region account for one-fifth of U.S. land area. In addition to large urban centers in every state, the region hosts hundreds of rural communities whose livelihoods come from forests, ranches, farms, and the ocean.

The Nation depends on the Southwest for more than half of its specialty crops such as fruits, nuts, and vegetables. The region also drives the U.S. technology sector, with more than 80% of the country’s technology capitalization located in California. 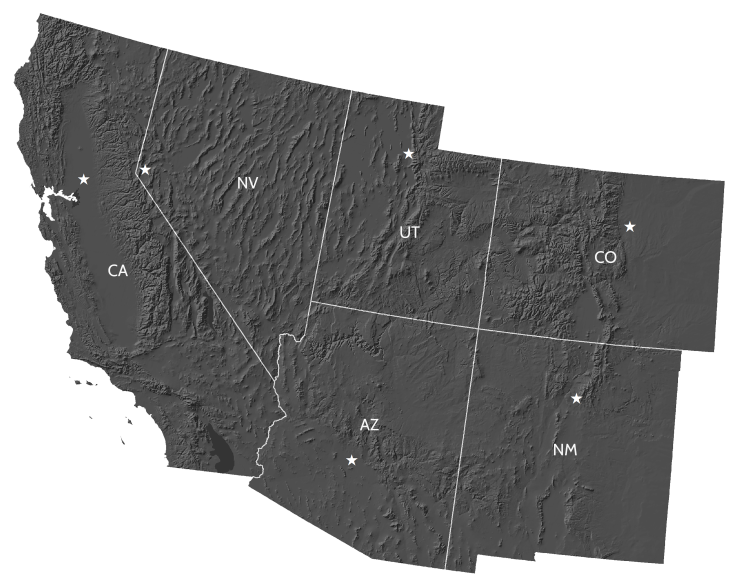 Higher temperatures increase the atmosphere’s “thirst” for moisture. As a result, evapotranspiration—the process by which moisture leaves soil and plants and becomes water vapor—draws increasing amounts of moisture from the environment when temperatures are high. These conditions can intensify drought and promote wildfire. At the same time, the warming atmosphere’s enhanced ability to hold water means that when precipitation does occur, it can be more intense. Therefore, higher temperatures are associated with both intensifying droughts and heavy rains. These events, combined with critical water demands from a growing population, deteriorating infrastructure, and groundwater depletion are all ongoing issues across the region. 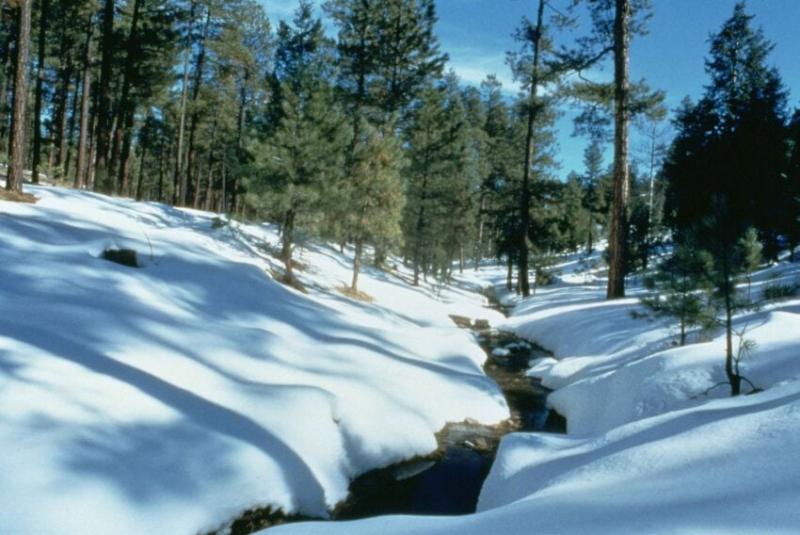 Winter snowpack in the Southwest’s mountain ranges provides a major portion of the surface water for the region. Spring snowmelt flows through major rivers, where dams capture the flow in reservoirs. Canals and pipelines transport the water long distances to urban centers that lack reliable surface water supplies. Complex water laws govern allocation among states, Tribes, cities, ecosystems, energy generators, farms, and fisheries, and between the United States and Mexico.

Over time, climate change is altering the timing and amount of water available for nature and humans in the Southwest. Increased temperatures, especially the earlier occurrence of spring warmth, have significantly altered the water cycle in the Southwest. Changes include decreases in snowpack and its water content, earlier peak of snow-fed streamflow, and increases in the proportion of rain to snow.

The reduction of water stored in large reservoirs in the Southwest—specifically Lake Powell and Lake Mead—increases the risk of water shortages across the region. Local water utilities, the governments of seven U.S. states, and the federal governments of the United States and Mexico have worked together to develop solutions to minimize the possibility of water shortages for cities, farms, and ecosystems.

In the foreground of this aerial photo, the city of Page, Arizona and the now-closed Navajo Generating Station on the Navajo Nation illustrate the extent of large surface reservoirs such as Lake Powell in the Southwest. The Glen Canyon Dam holds back the waters of the Colorado River to form the reservoir; water is released through the dam to generate electricity as it is needed downstream.

Approximately three-quarters of water used in the Southwest region goes to irrigate crops. The region grows half of the United States’ supply of fruits, vegetables, and nuts and most of the wine grapes, strawberries, and lettuce. Flexible water management techniques may be able to balance declining supplies with greater demands. In the face of this challenge, water resource planners and scientists are working to integrate data from satellites, climate and hydrology models, and field observations with existing water management tools, methods, and legal requirements.

The Southwest is in a Megadrought?

A pair of recent studies identified the period from 2000-2021 as the Southwest's driest megadrought in at least 1,200 years. Climate models show that the region would have been dry even without climate change, but not to the same extent. The recent paper concluded that human-caused climate change is responsible for about 42% of the soil moisture deficit since 2000. One of the primary reasons climate change is causing more severe droughts is that warmer temperatures are increasing evaporation, which dries out soil and vegetation. Learn more »

The National Integrated Drought Information System (NIDIS), available online at Drought.gov, offers recordings and summaries about the megadrought, the role of climate change in drought, and how water managers are working to adapt to a long-term dry pattern on the Colorado River. Multiple studies have examined the role climate change has played in the Southwest drought as well as what the future may look like. Learn more in the NOAA Drought Task Force Report on the 2020–2021 Southwestern U.S. Drought »

The integrity of Southwest forests and other ecosystems and their ability to provide recreation for humans, habitat for fish and wildlife, clean water, and economic livelihoods have declined as a result of droughts and wildfire. Vast numbers of trees have died across Southwest forests and woodlands due in part to increases in temperature, wildfire, and bark beetle infestations. Greenhouse gas emissions reductions, fire management, and other actions can help reduce future vulnerabilities of ecosystems and human well-being.

Climate change has led to an increase in the area burned by wildfire in the western United States. In 2016, an analysis estimated that the area burned by wildfire across the western United States from 1984 to 2015 was twice what would have burned had climate change not occurred. More recent studies have also concluded that much of the United States is experiencing more intense and frequent wildfires associated with extreme heating and drought.

To prepare for potential future ecological changes, U.S. federal agencies have begun to integrate climate change science into resource management planning in the Southwest. For example, the U.S. National Park Service has developed park plans with specific actions for managing resources under climate change. On private lands, planning that integrates native plants and wildlife into working landscapes such as farms, orchards, and ranches can promote conservation Ecosystem restoration provides an opportunity to integrate climate change considerations into natural resource management. Conservation of forests, especially coastal redwoods, which have the highest carbon densities of any ecosystem in the world, can slow or reduce climate change by naturally removing carbon from the atmosphere.

Sea level rise, ocean warming, reduced ocean oxygen, and ocean acidification are affecting the Southwest’s coastal resources and altering the coastal shoreline and ecosystems. Homes and other coastal infrastructure, marine flora and fauna, and people who depend on coastal resources face increased risk from climate-related hazards.

California has the most valuable ocean-based economy in the country, employing over half a million people and generating $20 billion in wages and $42 billion in economic production in 2014. Coastal wetlands buffer against storms, protect water quality, provide habitat for plants and wildlife, and supply nutrients to fisheries. 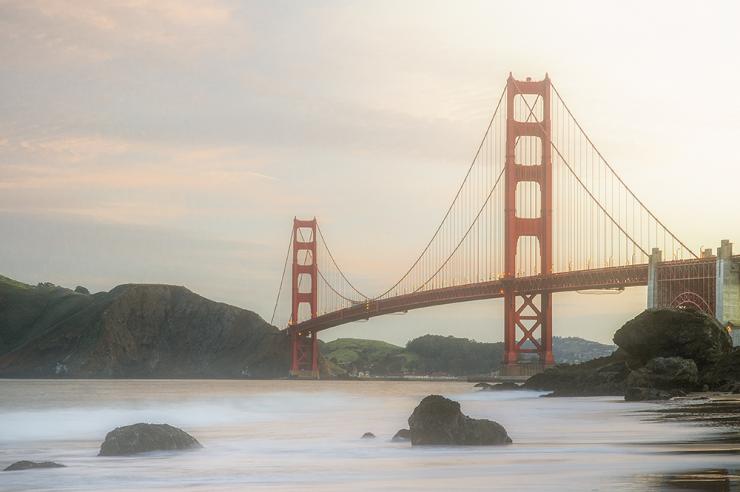 Measured near the base of the Golden Gate Bridge in San Francisco, sea level is rising around 2 millimeters per year. The 2022 Sea Level Rise Technical Report projects that sea level will rise the same amount in the next 30 years as it did over the previous 100 years. Photo by Roman Popelar, (CC BY-NC-SA 2.0).

Along the 3,400 miles of the California coast, an estimated 200,000 people live within 3 feet of current sea level. The seaports of Long Beach and Oakland, several international airports, many homes, and high-value infrastructure are sited in low-lying areas along the coast. In addition, much of the Sacramento-San Joaquin River Delta is near sea level.

Governments and private landowners along the California coast have built seawalls, revetments, and other structures to protect against sea level rise and storm surge, armoring 10% of the coastline. Because hard structures often alter natural water flows and increase coastal erosion, many parties are now exploring how to restore dunes, reefs, wetlands, and other natural features to protect the coast by breaking wave energy, to increase wildlife habitat, and to preserve public access to the coast.

Continued climate change could warm the waters of the California Current, contributing to more harmful algal blooms, deaths of birds and sea lions, closures of fisheries, and economic loss to sectors that depend on coastal marine resources. If emissions of heat-trapping gases continue to increase, projections indicate fish species such as coho salmon and steelhead could shift northward more than 180 miles by 2050 due to higher sea surface temperatures. Marine heat waves may also increase in frequency, possibly causing local disappearance of some fish and economic losses.

Another result of increasing emissions of carbon dioxide from human activities is an increase in the acidity of ocean water off the coast of California. Along the California coast, during some episodes of naturally acidic spring/summer upwelling of deeper ocean water, ocean acidity has spiked to some of the most acidic values in the world. This acidity dissolves the shells of some small planktonic sea snails (pteropods) and increases risks of economic losses in the shellfish industry. California’s crab, shrimp, mussel, clam, and oyster fisheries might also see a negative impact from ocean acidification, but it may benefit the state’s urchin fishery. 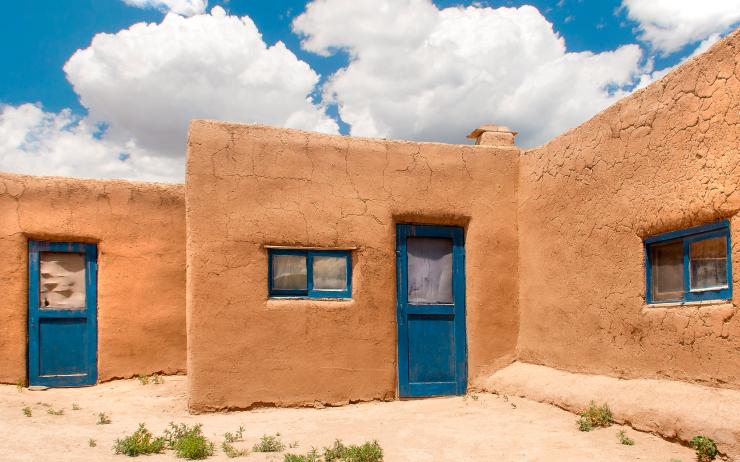 Changing conditions may reduce populations of some fish, wildlife, and plants that serve as traditional foods, medicines, and cultural resources for Indigenous peoples. Reduced availability of traditional foods often contributes to poorer nutrition and an increase in diabetes and heart disease. The physical, mental, emotional, and spiritual health and overall well-being of Indigenous peoples rely on these vulnerable species and materials for their livelihoods, subsistence, cultural practices, ceremonies, and traditions. In California, changes in marine ecosystems also affect resources for Indigenous peoples. For instance, ocean warming affects salmon and other fish on which Pacific Coast tribes rely for subsistence, livelihoods, and cultural identity

Projected reductions in the availability of water, coupled with water agreements that involve selling or leasing tribal water to neighboring communities, could place tribal water supplies at risk during severe shortages. As water supplies decrease and water demand increases, Tribes are at risk of finding themselves committed to providing purchased water to other entities.

Indigenous peoples in the Southwest region have traditionally used fire as a tool to protect and enhance species they use for basket weaving, medicines, and traditional foods. This cultural use of fire offers an important tool for adaptation and mitigation, as traditional burning reduces fuel accumulations that can lead to high-severity wildfires

Indigenous peoples have adapted to climate variations in the past. However, historical intergenerational trauma, extractive infrastructure, and socioeconomic and political pressures reduce their adaptive capacity. Still, in response to climate change, Indigenous peoples of the Southwest are developing new adaptation and mitigation actions.

Drought and rising temperatures are interfering with the Southwest's ability to meet growing demand for electricity through hydropower and burning of fossil fuels. Declines in snowpack and runoff and a shift of spring runoff to earlier in the year have reduced the volume of water in the Southwest’s rivers and reservoirs, reducing the ability of hydroelectric dams to generate electricity. Additionally, rising temperatures reduce the energy efficiency of water-cooled electricity plants.

In parts of the Southwest region, increasing temperatures may require geographic shifts in crop production, displacing existing growers and affecting rural communities. Because many fruit and nut trees require a certain period of cold temperatures in the winter, decreased winter chill hours have the potential to reduce crop yields.

High global demand for almonds has nearly doubled the acreage devoted to growing almonds in California since 2000; the state now produces over 80% of the world's almond supply. Adequate water and cool winter temperatures are required to maintain tree nut production; as climate change continues, this globally important asset may be vulnerable to changing conditions.

Projected increases in the average number of hot days per year and the frequency of extreme heat events will increase the risk of heat-associated deaths. Heat and other environmental exposures particularly affect outdoor workers. Switching outdoor work to the very early morning hours is one adaptation strategy communities can consider.