In the wake of a hurricane and beset by an economic recession, the University of Texas Medical Branch on Galveston Island rebuilt for future resilience.

Hurricanes and tropical storms spell trouble wherever they make landfall. As our climate warms, scientists project that hurricanes will be more intense, rates of rainfall associated with the storms will be higher, and higher sea levels will increase the height of storm surges. Thus, hospitals and campuses along the Atlantic Coast and Gulf of Mexico are at increasing risk of significant damage from these storms. 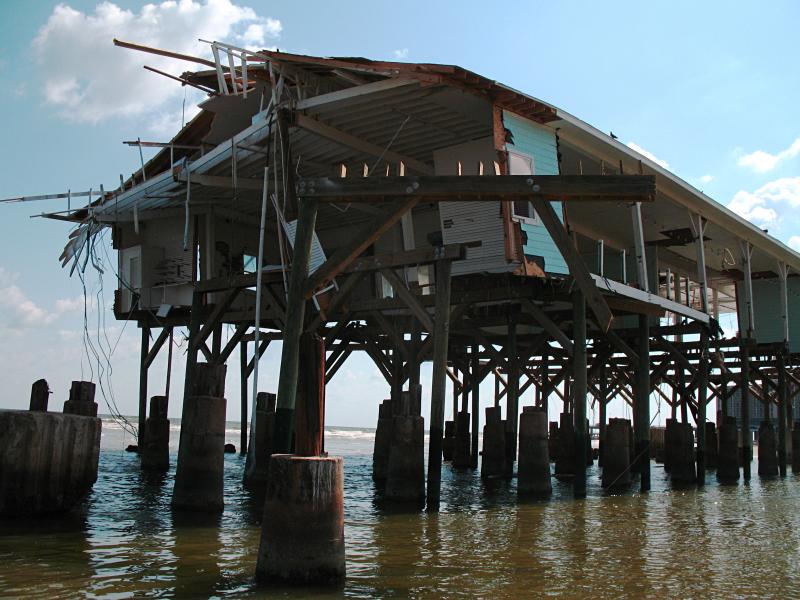 The ruins of Murdochs, a beachfront store on Galveston Island, after Hurricane Ike. The popular retail location has since been rebuilt.

In 2008, one such storm—Hurricane Ike—hit the University of Texas Medical Branch (UTMB), an 85-acre, multi-hospital health care campus located on Galveston Island. The storm smashed into the Galveston waterfront with wind speeds of 110 miles per hour and a 15-foot storm surge, causing $29.6 billion in damages. It was the third costliest storm in U.S. history. As the storm approached, decision makers at UTMB realized that if the bridge connecting the island to the mainland was damaged, they couldn't evacuate patients or bring in supplies.

The decision was made to evacuate inpatient populations before the storm hit—the evacuation cost $20 million. By the time the storm passed, nearly every one of the hundred structures on campus had sustained some damage. The combined cost reached almost $1 billion. Worse still, hospital functions and services were shut down for months, and the UTMB Emergency Department closed for nearly a year. This was particularly harmful for Galveston Island, as UTMB is the only health care provider on the island of 57,000 residents and hundreds of thousands of tourists. Before the storm, the Emergency Department averaged more than eight million visits per year.

Deciding to rebuild and adapt

The University of Texas Board of Regents held numerous discussions about the long-term viability of UTMB on the island. Their decision to rebuild was not easy—in the context of a national economic recession, they faced major hurdles in capital funding. Nevertheless, the board decided to reconstruct the campus, as long as the rebuilt campus could be more resilient to severe storms.

To avoid debilitating catastrophes similar to Hurricane Ike in the future, designers organized the UTMB recovery around four primary goals:

The UTMB campus, which employs 13,000 people, relies on a shared district infrastructure; this infrastructure had to be improved if UTMB was to avoid future disaster. UTMB undertook an infrastructure replacement project, which included elevating vulnerable mechanical and electrical infrastructure above the ground level in the health care core. UTMB also flood-proofed the radiation oncology treatment rooms, which were below the FEMA Base Flood Elevation (or BFE). This phrase describes the elevation that flood waters would reach during a flood so severe it has only a one percent chance of occurring each year. UTMB also created a new six-story clinical services building to house primary functions that were previously located on lower levels of the hospital and ancillary buildings in the complex—these functions include pharmacology, food services, sterile processing, blood bank, laundry, and storage. At the same time, because Ike’s winds had severely damaged elevated steam and power lines, UTMB chose to secure these lines in a flood-proofed tunnel system. UTMB also built a new district heating plant, complete with an underground distribution system.

Despite these moves towards greater resilience, UTMB noted that it remains dependent upon critical utilities external to the campus, such as water, sewer, natural gas, power, telephone, and data systems. UTMB continues to diversify services and expand facilities on the mainland, while working to mitigate risk on the Galveston Island campus.

Building for the future

A new ground-level concourse, built from water-resistant materials, now connects buildings on the campus. The entire ground level runs on stand-alone mechanical and electrical services: during flood conditions, power and utilities on this level can be shut down without compromising other services. UTMB also repaired and outfitted a 100,000-square-foot primary care pavilion with a flood wall rising five feet above ground. The flood wall is connected to a reinforced concrete wall that begins 20 feet below ground level. In all buildings, floor surfaces within 20 feet of ground level are built of water-resistant materials.

In a presentation to the American Meteorological Society, Steven LeBlanc, PE, MBA, Assistant Vice President at UTMB, summarized the lessons learned: “The storm is just an instance in time; recovery is where all the hard work and decisions are made. Recovery is also where opportunities reside: sustainable design is a must. Hurricanes come in approximately 20-year cycles; there is a generation to forget what you learned. It is critical to build to protect the future.”1