It Was a Dark and Stormy Night: Extreme Weather Leads to Collaboration in Boulder

It Was a Dark and Stormy Night: Extreme Weather Leads to Collaboration in Boulder

The city charts its path to resilience by focusing on extreme weather and interdepartmental collaboration.

It was was quite literally a dark and stormy night in Boulder, Colorado, on September 12, 2013. Extreme weather rocked the city that night, eventually sparking new conversations about climate change.

Receiving more than eight inches of rain, Boulder experienced flooding that brought the Boulder Creek to a record crest of 7.78 feet—the highest level recorded since 1894. The event threatened homes, buildings, and the people of the community. This type of extreme weather—as well as other recent events, such as wildfires—created an opportunity to plan for future climate change and build resilience in the city.

Building resilience in a college town

Boulder is a medium-sized city with a population of about 100,000 residents. Located on the northwest edge of the greater Denver metropolitan area, it sits at the transition from the Rocky Mountains to the Great Plains, an area with fairly high uncertainty with respect to future conditions in climate projections. While the city has frequently pursued progressive policies to address climate change, Colorado's state government generally has mixed views on the need for such measures: the state supports various climate assessments, but action is constrained by the legislature.

Boulder's commitment to addressing climate change has typically emphasized mitigating the city’s carbon footprint, with less focus on adapting to climate change and building resilience. A transition to resilience building is complicated by the fact that Boulder can be described as a "college town:" a significant portion of its population is made up of students from the University of Colorado's flagship campus. This portion of the city's population is transient, with residents moving in and out as they move through the university, which decreases the city’s ability to foster residents' understanding of local risks and preparedness. Regardless, promoting a conversation about climate resilience is a goal of the city and its municipal management.

The campus of the University of Colorado at Boulder.

In light of recent experiences with extreme weather events and the associated heightened commitment to reduce vulnerability to climate change impacts, the city partnered with Adaptation International, ISET-International, and other organizations in a project to explore how community-defined thresholds for extreme events could be used to understand and prepare for future climate changes. The project was funded by NOAA's Sectoral Applications Research Program.

Identifying concerns and actions...and a need for institutional structures

With support from the project team, city staff piloted a participatory process in the form of two Shared Learning Dialogues. In these discussions, participants aimed to identify critical thresholds for when weather- and climate-related hazards pose significant risks to the community. The NOAA project team analyzed local climate projections around the thresholds, and the group then selected an action they could take to build resilience.

Staff from several municipal departments—including emergency management, parks and open space, water, wastewater, local hospitals, and others—participated in the dialogues, resulting in a dynamic discussion about a wide range of climate- and weather-related concerns in the community. These concerns included extreme heat, increasing frequency and intensity of flooding, drought, wildfire, and increased variability in weather. 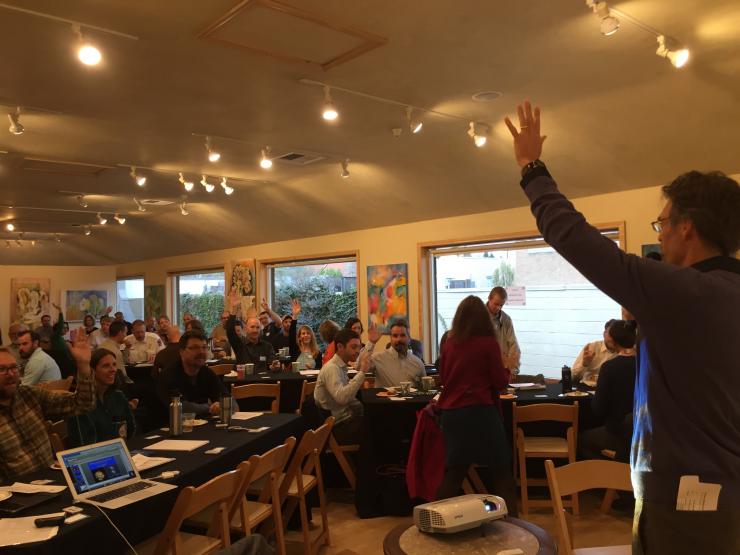 City staff participants during a workshop in Boulder.

"People don’t always see the immediate connections between climate change and their jobs—especially when the timescale is perceived to be 30 years away and they have a five-year master plan," observed Russ Sands, Boulder's Sustainability and Outreach Supervisor at the time of the workshops. "But they know what 'keeps them awake at night' about their jobs today, and they’re passionate about that. Asking that question, identifying how climate change might exacerbate those issues, and how their issues were interconnected with other departments was key to getting people talking and helping to make climate change feel more immediately relevant and worthy of planning."

Through these discussions, city staff came to recognize that they did not yet have the institutional structures needed to address some of the thresholds they identified. For example, the city has rarely experienced extreme heat events and therefore has no mechanisms for integrating extreme heat preparedness into their planning and management.

The dialogues helped participants recognize that events that aren’t currently occurring regularly enough to be a concern may become regular events in the future, and that they need to be prioritized and funded alongside preparation for events that are already happening. "You can't overemphasize the triple bottom line," says Sands. "Talking about financial needs and even the cost-benefit of adaptation and resilience projects are paramount to getting project support."

Brett KenCairn, a Senior Environmental Planner with the city, adds: "An important insight from the project is the difficulty in identifying critical thresholds for situations we may have never experienced before. Nonetheless, the process helped us start to develop a preliminary list of key factors we can continue to refine as we gain more experience and insights into how climate change is impacting our local area."

Building capacity and a common understanding

As a result of these discussions, Boulder city staff planned a series of interdepartmental workshops to build capacity and create a common understanding across city departments about current and future climate concerns. Ultimately, the follow-up workshops created a valuable forum for staff from a variety of departments to interact and begin building the connections necessary to work together.

While the city still faces the challenge of figuring out how to prioritize and fund efforts to prepare for and reduce vulnerability to future extremes, this challenge is one that Boulder is tackling head-on.