Climate change adaptation isn’t always welcome as a topic of conversation, even among those who could benefit from it. A recent study hints at a possible path forward.

Over the last decade, Purdue Extension educator Hans Schmitz has watched farmers across the U.S. Corn Belt struggle to cope with the consequences of extreme climate conditions. For instance, heavy spring rainfall in 2011 reduced farmers’ ability to get into their fields and delayed their planting. Episodes of extreme heat and dry spells during summers have also had a negative effect on farmers’ bottom lines by reducing corn pollination and yields. Schmitz recognizes these events as impacts of our variable and changing climate, and he is working to help Indiana’s agricultural community become more resilient to these types of events. However, climate change adaptation is not a popular topic for some farmers, and many local residents are quick to change the subject when Schmitz brings it up.

Study points to a new strategy

Schmitz recently learned about a NOAA-funded study led by Purdue University researchers to investigate the connection between extreme climate events and climate change adaptation. As part of the study, more than 850 agricultural advisors in Indiana, Iowa, Michigan, and Nebraska responded to surveys before and after the extreme drought of 2012. Participants answered questions on their beliefs about climate change, concerns about climate impacts, and attitudes about climate adaptation.

The study found that experience with an extreme event did not cause a shift in climate change beliefs or climate adaptation attitudes in general. However, survey results showed that advisors’ concerns about drought, extreme heat, and weeds/pests increased after the 2012 summer drought. At the same time, concerns about flooding, ponding, and nutrient runoff decreased.

These findings suggest that heightened risk perceptions after an extreme event may present an opportunity to build preparedness for similar events. In other words, a well-timed message about specific climate risks may be more effective for building agricultural resilience than attempting to address the full range of potential climate change impacts at once. 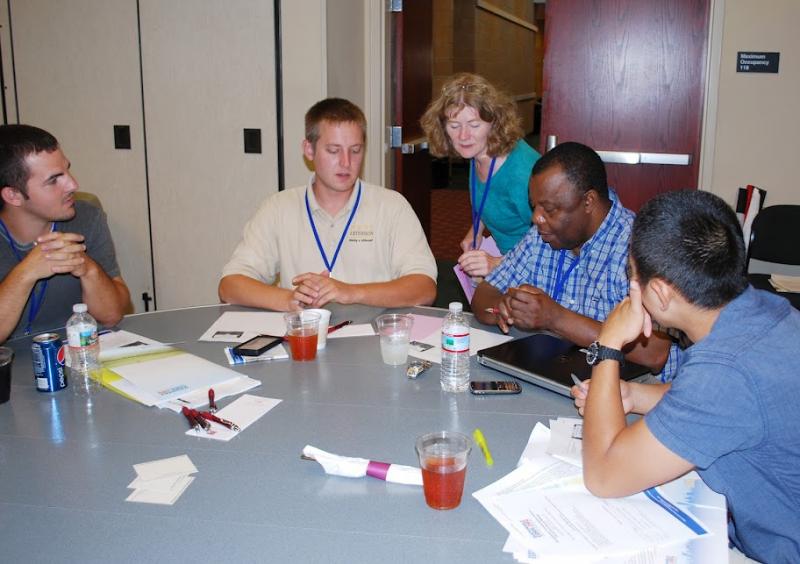 Since extreme events are difficult to predict, Schmitz understands that he needs to prepare risk-specific adaptation information now, before the next drought, flood, or insect infestation occurs. Schmitz is currently sharing this information with crop advisors and farmers, building a team of individuals who will be ready to advise farmers and neighbors when adverse conditions are likely. This team can encourage farmers to consider adaptation options during and after extreme events; farmers will judge the value of the options they pursue based on their agricultural profitability.

In this way, farmers and advisors may increase their resilience to varying climate conditions, one impact at a time, ultimately ensuring a consistent and affordable food supply.