O'ahu's busy construction industry depends on being able to dispose of demolition and construction wastes. Forecasts for a developing La Niña—often accompanied by heavy rains in Hawai'i—alerted managers at the island's main construction landfill to their climate vulnerability.

On O’ahu, the most populous island in Hawai’i, construction is constant. Teardowns of outdated structures and construction of new buildings generate thousands of tons of demolition and construction waste every week. As vice president of PVT Land Company—the integrated waste management business that receives all construction and demolition waste on the island—Steve Joseph knows that if the landfill closes, the island’s construction industry must slow or cease operations, as they have nowhere to take the waste. Joseph also knows that his company’s ability to provide waste disposal services is vulnerable to heavy rains. Unless the landfill’s drainage system is clear, they cannot operate or accept incoming wastes.

Forecast for a strong La Niña 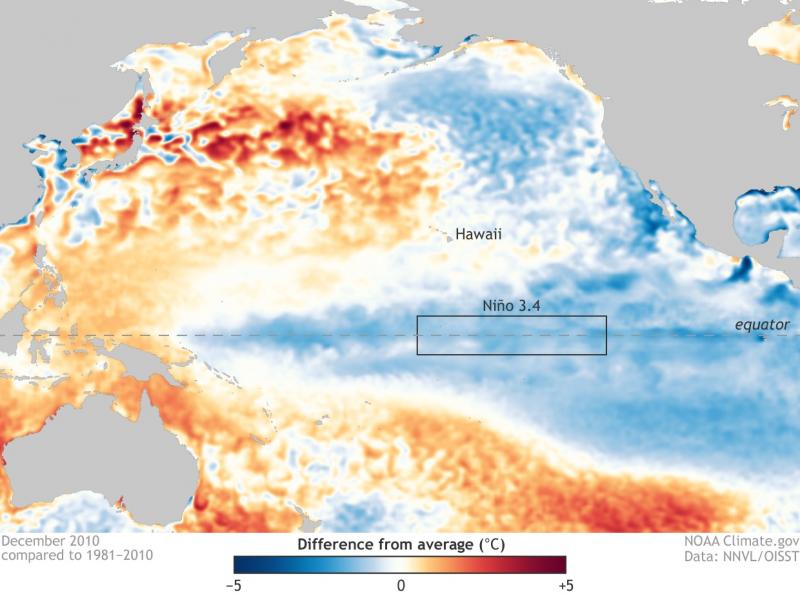 By December 2010, a plume of colder-than-average (blue) water extended westward along the equator. Sea Surface Temperatures in the Niño 3.4 region—one indicator of the ENSO state—were 1.4°C below average. Moderate and strong La Niña events typically bring above-average rainfall to the Hawaiian Islands in the winter months.

El Niño and La Niña—opposite states of a naturally occurring climate phenomenon called the El Niño Southern Oscillation or ENSO—can have a strong influence on rainfall on many Pacific Islands. To inform residents of upcoming conditions and their potential impacts, the Pacific ENSO Applications Climate (PEAC) Center in Honolulu makes island-level forecasts for upcoming seasons in Hawai‘i. The National Weather Service distributes these climate forecasts through television, radio, and print and electronic newsletters. In October 2010, the Honolulu Weather Forecast Office gave its winter briefing, indicating that the island of O‘ahu could expect above-average winter rainfall due to a moderate-to-strong La Niña developing in the Pacific. When Joseph saw the forecast, his company moved quickly to take steps to mitigate the climate risks.

“When NOAA made the announcement that we were going to have a La Niña year, we immediately took steps to improve our stormwater system,” said Joseph, looking back on the decision.

PVT Land Company used their drainage system models to predict the effects of rainfall levels likely in a La Niña event.  The company’s managers decided to upgrade the infrastructure that would divert and hold large amounts of stormwater. By the end of November 2010, PVT had finished upgrading its storm drainage system and retention ponds.

The dry Nanakuli area, where the PVT landfill is located, usually receives a total of just 10 to 14 inches of rain over a year. On January 13, 2011, however, with La Niña in place, the area received about 10 inches of rain in a single storm. Other local landfills were not prepared to handle the intense rainfall and ended up closing down for days. As a result of the storm, one nearby landfill released hazardous untreated flood water and waste onto a local beach, leading to a temporary closure of that shoreline to the public.

Due to their use of climate forecasts, PVT Land Company was open for business the next day. By remaining open, PVT estimates that they saved about $1 million in gross sales, potential damage to infrastructure, and lost salaries. This estimate does not include the additional economic impacts from slowed or stopped construction and trucking across the island, had there not been a place to properly dispose of debris. Another important realm in which the early action saved the company time and money was in avoiding potential litigation over the impacts of a failed stormwater system.

The PVT Land Company continues to use seasonal climate forecasts to guide their mid-range planning process. Based on their success in anticipating La Niña, the company is interested to learn how longer-term local climate change projections can assist them in their goals of continuing a safe and efficient business.

The PVT Land Company (left) is O‘ahu’s only landfill for construction-site waste. The site receives more than 200 truckloads of construction debris per day. The company upgraded their stormwater drainage system and retention pond (right) in anticipation of increased volumes of stormwater.