When the Citymeals volunteer arrived at the dimly lit apartment in Astoria, New York, on an August afternoon in 2006, the windows were closed and the air was stifling. The elderly woman who lived there had an air conditioner, but had not turned it on because she felt she could not afford it. The volunteer set down the meal she had brought, opened a window, turned on a fan, and encouraged the woman to drink a glass of cold water, reminding her that it was important to stay hydrated on such a hot day.

That’s a typical scene this time of year, says Heather Roiter, who is in charge of protecting New Yorkers from all kinds of hazards at the city’s Office of Emergency Management. “Heat is the number one natural hazard killer. People don’t think about its danger sometimes, because it happens so frequently, but it is one hazard we have to take very seriously."

On that August day in 2006, NOAA’s National Weather Service office in Upton, New York, issued a heat advisory. The Office of Emergency Management enacted its heat protocol, sending alerts to the 6,000 organizations in its Advance Warning System network. Roiter’s goal was to reach every person in New York City who cared for vulnerable individuals, including dialysis centers, Citymeals, visiting nurses, and home health care providers.

Even with these efforts, many people suffered in the heat wave. The effects were made worse by a power outage in Queens, which left 174,000 people without electricity for more than a week. By sunset on August 5, 2006, 46 New Yorkers had died of heat stroke. Health officials eventually counted 100 more heat-related deaths.

Heatwaves are riskier for older people, the poor, and the sick

A heat wave is not an “equal opportunity” health threat; it discriminates against older people, people who are poor, people with chronic health conditions, and people taking medications that inhibit body heat regulation. Those with heightened risk of heat stroke include people who suffer from heart disease, asthma, or diabetes, people who don’t have access to air conditioning, and people with mobility issues who have trouble getting up to open the window, and those who don't recognize the need to drink plenty of water.

Where people live in the city also makes a difference. Expanses of black asphalt, concrete, or concentrations of metal infrastructure can trap heat, turning some places into “heat islands” with temperatures as much as 10 degrees hotter than surrounding areas. These features also restrict the amount of heat-dispersing vegetation that can grow. Studies show that in some cities, including New York City, the hottest urban heat islands tend to occur in the poorest neighborhoods, where there is also limited access to air conditioning. 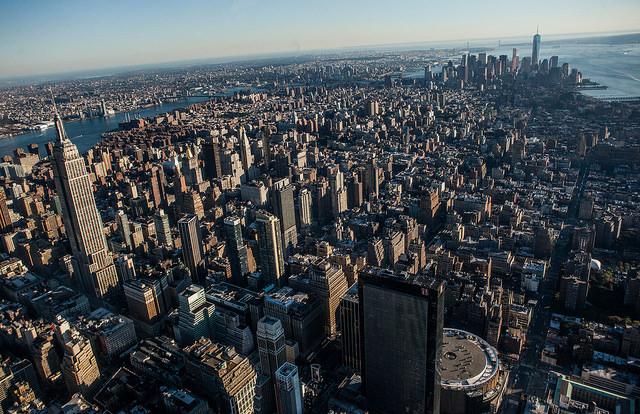 New York City from above. Asphalt, bricks, and metal used in much of the city's construction traps heat and drives up city temperatures.

“In New York City, the health risk of heat starts going up in a nonlinear way between 95 and 100 degrees,” explains Tom Matte of the New York Department of Health. “There are a lot of vulnerable people in the city, and our housing is not well adapted to heat.”

In 2007, Matte and his health department colleagues used their own data to persuade NOAA’s National Weather Service to lower the temperature at which they would declare a heat emergency in New York City from 105°F—the temperature at which an emergency would be declared outside of the city—to 95°F in the city, to account for the heat island effect.

Preparing for a warmer future

Since the 1970s, record-setting daily high temperatures have become more common than record-setting low temperatures across the country: from 1999 through 2009, record highs outnumbered record lows by a ratio of 2:1. Climate models predict an increase in the frequency, severity, and length of heat waves in coming decades. In other words, what now seems like an unusually hot day will become much more common. Health experts expect heat to become even more of a threat to New Yorkers’ health in coming years. A NOAA-sponsored research project on climate adaptation in urban settings—the Consortium for Climate Risk in the Urban Northeast, or CCRUN—is working to determine the extent of that threat. 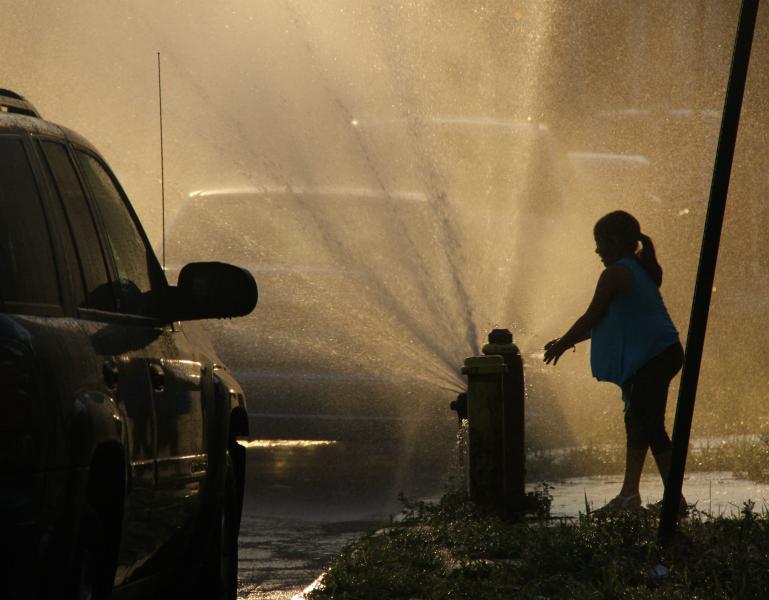 An open fire hydrant in the Bronx helps one girl finds a way to beat the heat.

Elisaveta Petrova, a graduate student with Columbia University’s School of Public Health, works on the project. “CCRUN brings together teams from various disciplines—social scientists, engineers, epidemiologists—to solve issues and to provide information that people can use to bring a climate dimension into whatever planning work they do,” Petrova explains. “For example, CCRUN connects human health and temperature, and helps people consider how resources should be allocated to protect vulnerable people from heat. Should we plant trees? Build water fountains? Paint roofs white? Which neighborhoods need these interventions the most?”

Research shows that reducing local temperatures by just a couple of degrees through measures like these could make residents less than half as likely to die from extreme heat. “We know what the models predict,” says Petrova, “but we need to keep building our understanding of what products are useful for community organizations and for health professionals.”

In response to the recent and anticipated future warming trend, NOAA and the Centers for Disease Control and Prevention have partnered to build the National Integrated Heat Health Information System, called NIHHIS for short. The goal of the system is to provide more advanced warnings and decision-support services to help health care workers, social services providers, and the general public better prepare for and respond to extreme heat events.

Meanwhile, New York City’s Office of Emergency Management, health department, and other agencies are doing what they can—from designating hundreds of cooling centers in public libraries and community centers, to protecting the city’s electric grid and water supply by stopping all non-essential construction when the meteorologists call heat alerts. It is hard to reach all of the most vulnerable people, but understanding the health effects of heat—and how actions like opening a window or giving someone a drink of water can help—will save lives.