As sea level rises, wetlands and marshes must move inland, or drown. The Sonoma Land Trust is using innovative strategies to restore and enhance marshlands and the ecosystems they support. 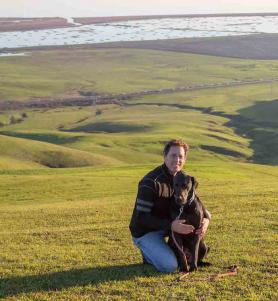 In the glow of a winter sunrise, Julian Meisler admires a stretch of tidal mudflat and wetlands along the north shore of San Francisco Bay. As the program manager for the Sonoma Land Trust’s Baylands project, Meisler spends plenty of personal and professional time in the area, and he knows how valuable these undisturbed and restored wetlands are for people and wildlife. The land here—once destined to host a casino-resort complex—was purchased by Sonoma Land Trust before construction began. This means the land will be conserved as open space into the future. However, Meisler perceives another threat to this valuable habitat: sea level rise.

The value of marshes

San Francisco Bay is the second largest estuary in the United States, and wetlands along its margin provide a range of valuable ecosystem services. For instance, tidal marshes provide flood protection for homes and businesses, filtration of stormwater runoff, prevention of erosion from waterfront properties, habitat for birds and waterfowl, and nurseries for fish and shellfish that provide food and fuel our economy. Additionally, the Bay is home to many at-risk species. Some of these species—for instance, the endangered Ridgway’s rail, formerly called the clapper rail—live exclusively in tidal marsh habitat. 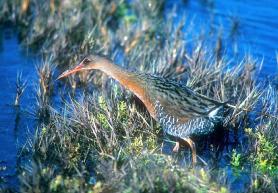 Some conservation groups in the Bay region question whether marshes are worth the cost of trying to save them—they worry that they might invest their limited restoration funds on marshlands, and then lose the land to the sea. However, given the valuable services wetlands provide, conservation groups such as Sonoma Land Trust and Ducks Unlimited have made large investments to preserve this rich habitat. Though the future is uncertain, the groups are taking action now to preserve this threatened ecosystem.

When Meisler and his team used the tool, the results helped convince them that marshes in the Trust’s section of shoreline were worth restoring. The team learned that if the watershed provided enough sediment, the wetlands could rise in elevation at a rate that keeps them above sea level. Ensuring a sufficient sediment supply could keep the area functioning as marsh habitat rather than drowning completely.

Knowing more about how marshes may change—including getting estimates of the extents of different types of habitat likely to exist as sea level rises—has helped planners make decisions about where to prioritize restoration efforts and what kinds of projects to undertake. Land managers and property owners all around the Bay can use the Future Marshes tool to get projections of future conditions as input for their management decisions.

To date, more than 20,000 acres of wetlands in the San Francisco Bay have been restored to tidal action after conservation groups obtained land and breeched historic levees. In many cases, waters are flowing over these historic marshlands for the first time in over 100 years. Sonoma Land Trust and its partners continue to work on protecting and restoring the puzzle-pieces of land across the region. Their goal is to connect a healthy watershed to a thriving tidal marsh ecosystem—one that will buffer people from the impacts of climate change and sea level rise well into the future. As Meisler and others face the unprecedented threat of sea level rise, they are choosing unprecedented strategies to conserve habitat and biodiversity. Using the best information science can provide, they continue restoring and enhancing tidal marshes, preserving these ecosystems for the future.