Infrastructure and the Built Environment

Much of the region’s population of 50 million people live in cities. Flooding and life-threatening heat waves are major concerns for municipalities across the region. Additionally, the region’s aging infrastructure—built to withstand past climates—may amplify impacts from heat waves and flooding events. 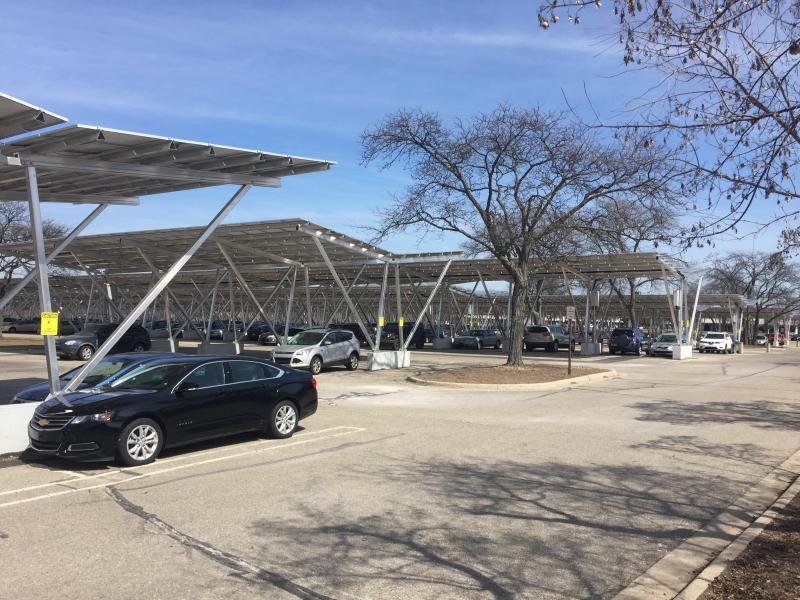 Solar carports were installed on the Michigan State University campus in 2017.

Renewable energy is expanding in the Midwest. For example, as part of a campus-wide initiative to transition to renewable energy sources, in 2017 Michigan State University established five solar carports that have an estimated annual production of 15,000 megawatt hours, representing about five percent of electricity use on campus. In addition to reducing carbon emissions, this investment is expected to save the university $10 million over 25 years.

Heavy precipitation events occasionally inundate urban and agricultural land and disrupt navigation on the region’s roads, rivers, and reservoirs. The region’s water infrastructure—for flood control, navigation, and water supply—was designed based on historical precipitation and streamflow patterns. In a changing climate, historical conditions are not always an appropriate guide for future conditions. 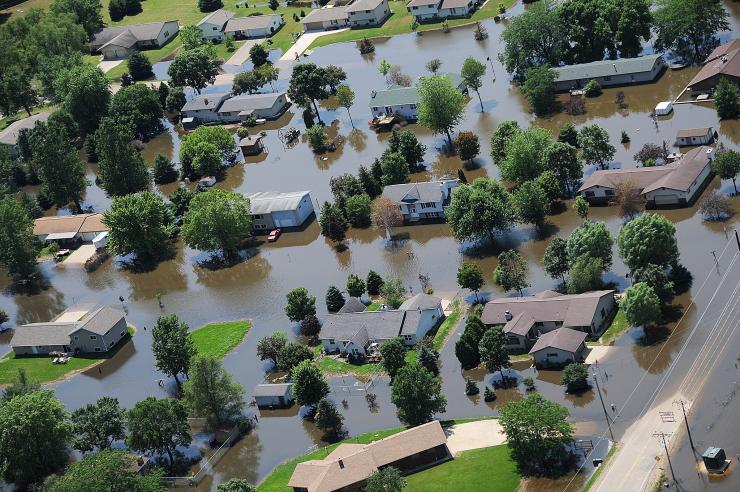 Changing land use and expanding urbanization are reducing water infiltration into the soil. As a consequence, the region is seeing increased surface runoff, which can exacerbate impacts caused by heavy precipitation events. Flooding can overwhelm stormwater systems, resulting in property damage, including basement backups. In metropolitan areas with older sewer systems that combine sanitary sewage with stormwater (combined systems), extreme rainfall can result in the release of raw sewage into rivers and streams, posing both health and ecological risks. These releases, known as combined sewer overflows (CSO), pose challenges to major sources of drinking water. The Environmental Protection Agency estimates that more than 800 billion gallons of untreated combined sewage are released into the nation’s waters every year, due in part to heavy precipitation events. 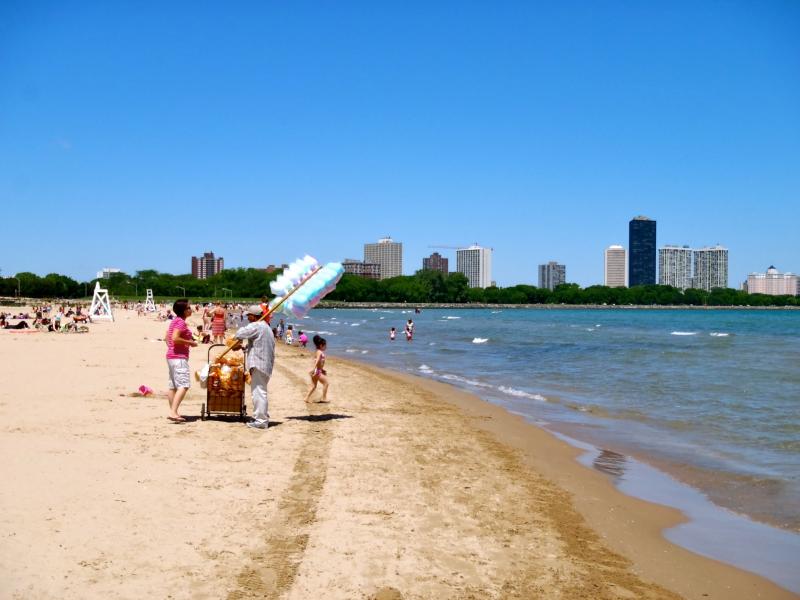 As schools close for the year and summer weather beckons, many recreationalists head to the Great Lakes' public beaches. However, these coastal areas can become contaminated with disease-causing bacteria that threaten public health, disrupt water recreation, and pay a toll on the Great Lakes economies that depend on summer tourism.

The Great Lakes—which provide drinking water to more than 40 million people and are home to more than 500 beaches—have been subject to CSOs, and increases in CSO frequency and volume are projected under mid-high and higher emission scenarios. In light of the changing climate, municipalities may need to invest in new infrastructure to protect human health and water quality. The EPA estimates that the cost of adapting urban stormwater systems to handle more intense and frequent storms in the Midwest region could exceed $480 million per year (in 2015 dollars) by the end of the century. Communities along the Great Lakes could also face tourism losses from fouled near-shore regions and increases in beach closures resulting from water-borne diseases.

Increased precipitation intensity also increases erosion, which in turn increases sediment levels in reservoirs. Increased storm-induced agricultural runoff and rising water temperatures have increased non-point source pollution problems in recent years, which has led to increased phosphorus and nitrogen loading. This, in turn, contributes to more frequent and longer occurrences of low-oxygen “dead-zones” and to harmful, lengthy, and dense algae growth in the Great Lakes and other Midwest water bodies.

Extreme precipitation events also affect transportation systems. Heavy rainstorms can result in the temporary closure of roadways, and faster streamflow caused by extreme precipitation can erode the bases of bridges, a condition known as scour. The EPA estimates that the annual cost of maintaining current levels of service on midwestern bridges in the face of increased scour damage from climate change could reach approximately $400 million in the year 2050. In addition to its impacts on infrastructure, heavy precipitation also affects the operation of roadways by reducing safety and capacity while increasing travel times. Projected increases in the number of extreme precipitation events have been linked to an increased risk of traffic crashes. 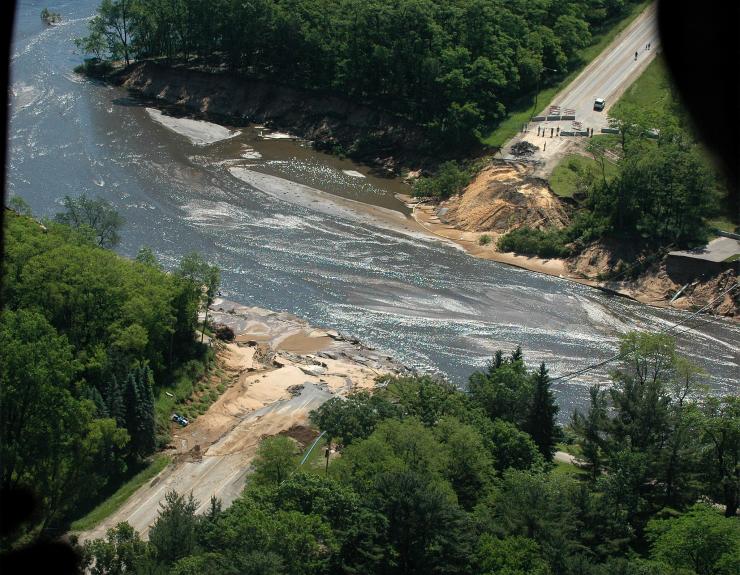 A road in Jefferson County, Wisconsin, is washed out from the flooding of the Crawfish River in 2008.

Flooding on major rivers also poses a challenge to communities in the Great Lakes. Major river floods differ from flash floods on smaller streams in that they affect a larger area and require longer periods of heavy precipitation to create flood conditions. River floods can cause loss of life, as well as significant property damage. River floods have caused the closure of interstate highways and temporary inundation of secondary roads. Climate projections suggest an increased risk of inland flooding, and average annual damages from heightened flooding risk in the Midwest region are projected to be in excess of $500 million (in 2015 dollars) by 2050.

Green infrastructure—the use of plants and open space to manage storm water—is helping communities in the region become more resilient to challenges associated with heavy precipitation. At the site or neighborhood level, rain gardens and other planted landscape elements collect and filter rainwater in the soil, slowing runoff into sewer systems. Permeable pavements on parking lots allow water to be stored in the soil. Trees planted next to streets also provide important storm water management benefits. Larger-scale projects include preservation of wetlands. In addition to their storm water management benefits, some types of green infrastructure, such as urban trees and green roofs, contribute to climate change mitigation by acting as carbon sinks.

In addition to the flooding impacts on transportation systems discussed above, changes in temperature also can pose challenges to transportation infrastructure. Extreme heat creates material stress on road pavements, bridge expansion joints, and railroad tracks. Milder winter temperatures, however, may be expected to partially offset these damages by reducing the amount of rutting caused by the freeze–thaw cycle. Even taking into account the benefits of milder winters for paved surfaces, the EPA estimates that higher temperatures associated with unmitigated climate change would result in approximately $6 billion annually in added road maintenance costs and over $1 billion in impacts to rail transportation by 2090 (in 2015 dollars).

To learn more about climate-related impacts on infrastructure and the built environment, visit Topics. The following topics may be particularly helpful: