Municipal water supplies are increasingly vulnerable due to variable precipitation and aging water infrastructure. Greater evaporation and earlier snowmelt promote drought conditions. At the same time, increases in the frequency of heavy precipitation events increase the risk of flooding.

Changes in the water cycle 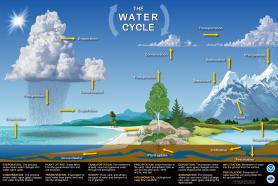 The water cycle involves the continuous circulation of water through different parts of the Earth system. Click the image for a larger view to read descriptions of each of the ten processes illustrated in the image.

The water cycle, encompassing all processes that move water through different parts of the Earth system, is naturally dynamic over time. As climate warms, the rate of each process responds by increasing or decreasing across different regions and over varying time scales. New conditions can increase the frequency and severity of events when locations have too much water (flooding), too little water (drought), or poor quality of water (contaminated).

Patterns of when, where, in what form, and how much precipitation falls are changing:

Additionally, heavy precipitation events in most parts of the United States have increased in both intensity and frequency since 1901 and are projected to continue increasing, with notable differences in total precipitation across seasons and regions.

Streamflow patterns are also changing. For instance, earlier snowmelt and declines in spring snowpack are changing the timing of peak streamflow in the West. Over the last century, peak flows have moved earlier in the year. This change has the potential to stress the water supply of communities whose storage facilities are optimized for the gradual melting observed in the past. As warming continues, the portion of precipitation that falls as rain rather than snow is likely to increase, leading to further changes in natural systems and socioeconomic sectors.

Changes in precipitation patterns may challenge the reliability of water supplies in some areas of the United States. In order to deliver water through all seasons of the year, water utility companies already use an array of storage and delivery strategies. Legal constraints, aging infrastructure, and population growth can challenge inflexible water supply systems, leaving them vulnerable to impacts of our changing climate. 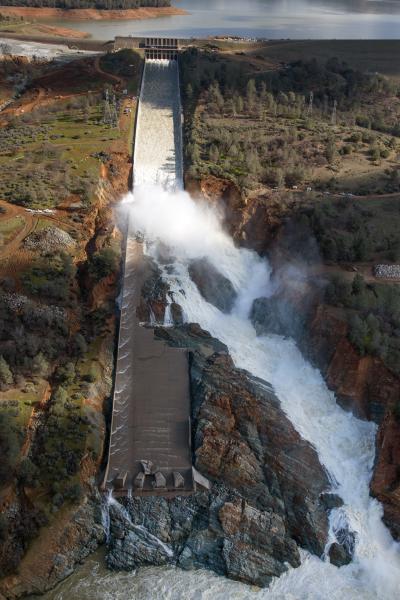 This aerial view shows water flowing down and then out of the damaged Oroville Dam spillway.

Across the United States, much of the critical water infrastructure is aging, deteriorating, or nearing the end of its design life. Estimated reconstruction and maintenance costs for dams, levees, aqueducts, sewers, and water and wastewater treatment systems in the nation run into the trillions of dollars. As of 2018, however, no comprehensive assessment of the climate-related vulnerability of U.S. water infrastructure has been compiled, and climate risks to existing infrastructure systems remain unquantified. Neither are there common design standards or operational guidelines that address how infrastructure should be designed and operated in the face of changing climate risk. Consequently, actual risks to U.S. water infrastructure may be underestimated. Additionally, extreme events indicate that water infrastructure is increasingly vulnerable to compound extreme events—the combination of two or more hazard events or climate variables over space and/or time that leads to an extreme impact. These compound events have a multiplying effect on the risk to society, the environment, and built infrastructure

The continued availability of irrigation for crops and landscaping is also vulnerable to climate change, particularly in the Southwest where irrigation accounts for the highest volume of water used. Projected increases in temperature and potential evapotranspiration, accompanied by decreases in soil moisture, will challenge this already-dry area with increased demand for water. Demand for water will also grow with population, as people migrate to Sun Belt states for better weather. 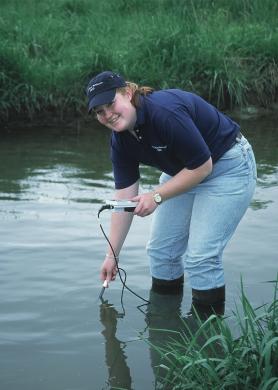 A volunteer testing water pH and temperature in Virginia.

Projections for a warmer climate point to a decrease in water quality. During floods, above-average streamflow increases the amount of sediments and pollutants in water. Under drought conditions, persistently low streamflow rates also reduce water quality. Increasing precipitation intensity, along with the effects of wildfires and fertilizer use, increase the contaminant load of streams and rivers used by downstream water users and ecosystems.

Along the coast, sea level rise, storm surges, and changes in the use of surface water and groundwater can compromise the sustainability of freshwater aquifers and wetlands. As sea level rises, saltwater mixes with freshwater at the surface and underground. As humans withdraw more freshwater from rivers, salty water encroaches on land where freshwater once flowed to the sea. In many coastal cities, sewer systems and wastewater treatment facilities sit on low-lying land along waterways or at sea level, putting these facilities at risk from rising seas and storm surges.

Water is necessary to produce energy. Across the country, flowing water has been harnessed to spin turbines at hydroelectric dams. Water also produces steam in thermoelectric power plants and cools energy-producing equipment by absorbing waste heat in nuclear plants.

Energy is necessary to process and distribute water. Extracting water from rivers and aquifers, conveying it to storage facilities, treating it, distributing it, and collecting it as wastewater all take energy. Facilities for producing energy and water also require land, which can reduce the extent of land available for agriculture and forestry. As climate changes, competition for water, energy, and land will increase. Increasing population and a growing economy may also intensify this competition.

Humans depend on the natural environment to survive. They use a range resources and services produced by natural ecosystems—communities of living organisms and the environments they inhabit. Food, building materials, outdoor recreation, and wildlife habitat are some of the benefits humans get from ecosystems on land. Ecosystems also help protect assets from events such as flooding, storm surge, and wildfire. Aquatic ecosystems—the natural environment surrounding streams, rivers, lakes, estuaries, oceans, and groundwater—also benefit humans and nature: they store water, regulate water quality, support fisheries, provide recreation, and carry water and materials downstream. 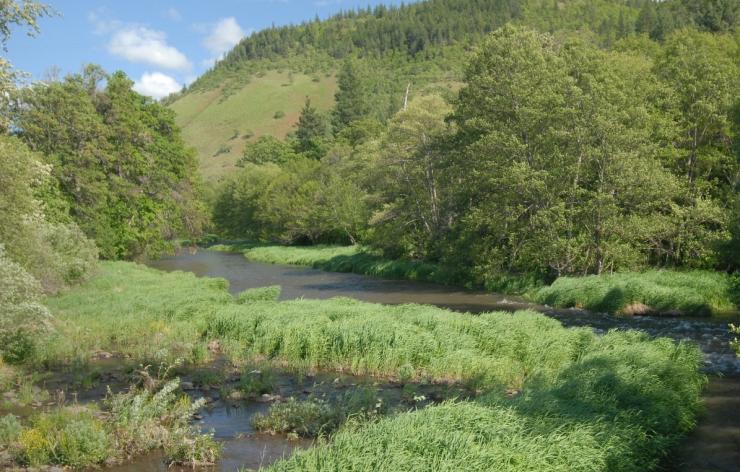 Too little water or too much water can both damage ecosystems by reducing their biodiversity and their capacity to thrive. Receiving too little water is a significant threat for ecosystems: on average, humans use more than 40 percent of the renewable supplies of freshwater available in more than a quarter of all U.S. watersheds. Freshwater withdrawals are even higher in the arid Southwest. Removing large volumes of water from the natural environment for human use reduces the range of climate variability and change that affected ecosystems can tolerate, ultimately reducing the resilience of communities and businesses that depend on the these ecosystems.

To learn more about impacts of climate change and variability on water resources, visit the subtopic pages: