Extreme events increasingly threaten land-, water-, and air-based transportation systems and supply chains. Operations involved with the extraction and delivery of raw materials and the distribution of products are vulnerable to disruption from flooding, drought, and sea level rise. 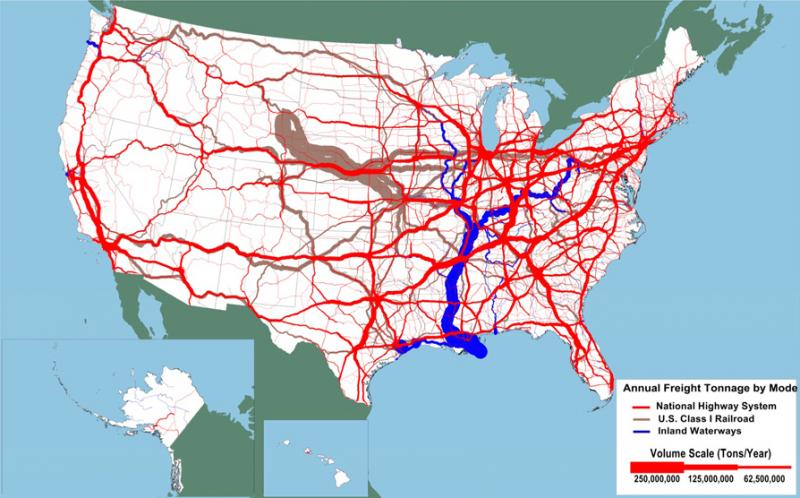 This map indicates the amount of freight moved across portions of the United States via different modes of transportation in 2007.

Climate change presents new risks to domestic and international transportation systems and supply chains. The U.S. economy depends on robust transportation systems and supply chains to efficiently and effectively distribute goods and people down a street, across the country, or around the world. Supply chains connect multiple steps within complex production systems that produce and deliver many of the goods utilized by consumers in our global economy. Climate-related disruption of these systems may result in substantial economic losses, as well as threats to the safety and welfare of populations. 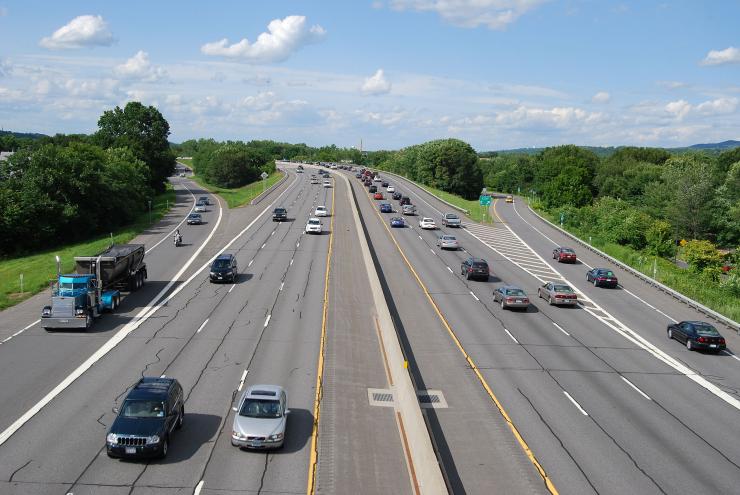 The United States relies on diverse modes of transportation: 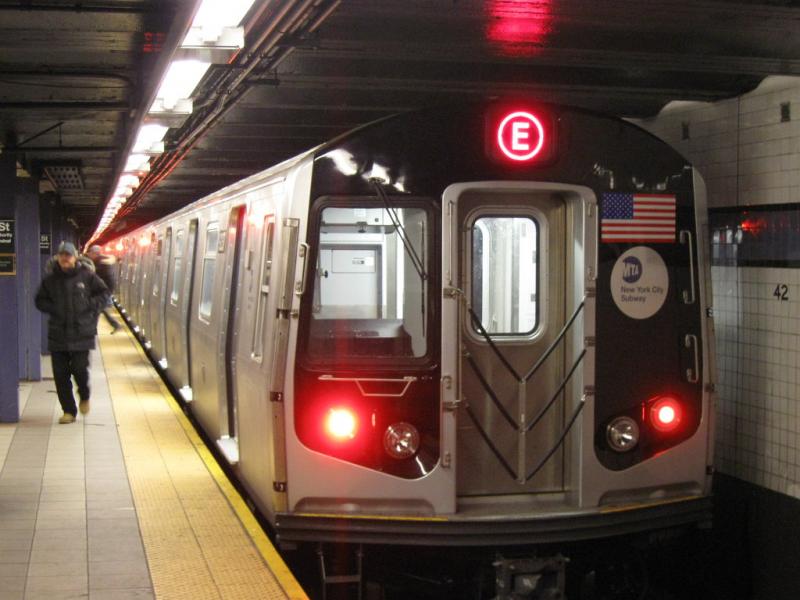 The New York City Subway is one of the world's largest and busiest rapid transit systems.

Supply chains represent a shipper’s view of the freight transportation network. The chain includes all the elements involved in transporting raw materials to processing locations and fabrication facilities, as well as those that bring finished products to vendors and final customers. With the continued development of global trade among countries, the supply chains of materials such as coffee from Africa or coconut oil from the Philippines span the whole world. As materials move from their source to processing and/or manufacturing facilities, and then to retailers and end users, interruptions in any portion of the chain can increase costs and inconvenience customers. Some supply chains are only important to the makers and users of particular products. Other chains—for example, those that supply fuel and food—are of importance to suppliers, consumers, and the economy. 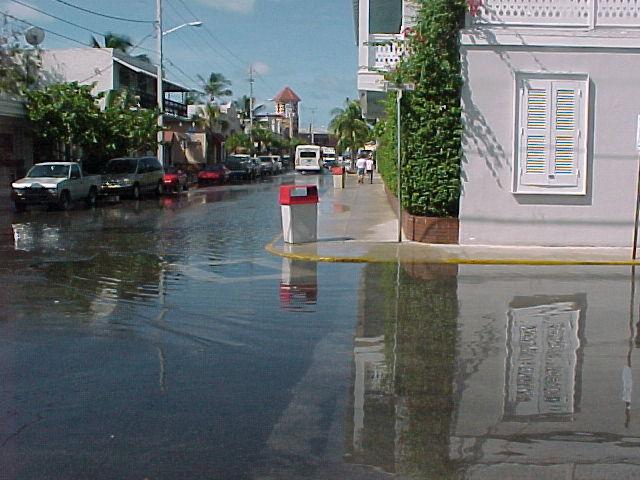 Extreme high tides that occur a few times per year in low-lying coastal areas inundate roads and other infrastructure with seawater.

Weather- and climate-related events are already affecting transportation and supply chains. Impacts on the transportation system can be divided into several categories: 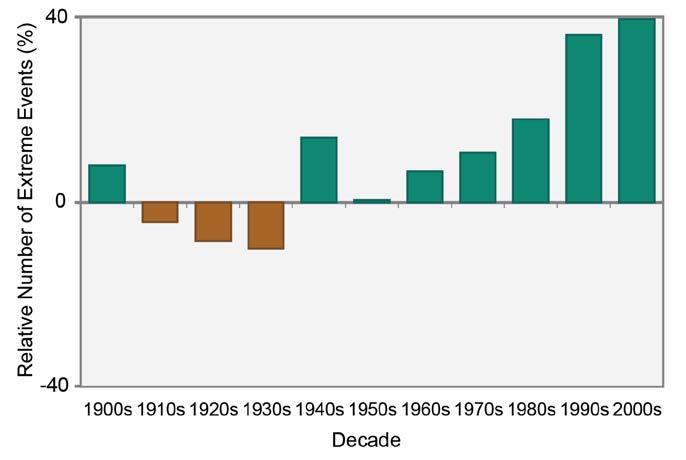 One measure of a heavy precipitation event is a two-day precipitation total that is exceeded on average only once in a five-year period, also known as a once-in-five-year event. As this extreme precipitation index for 1901–2012 shows, the occurrence of such events has become much more common in recent decades. Changes are compared to the period 1901–1960, and do not include Alaska or Hawaii. The 2000s decade (far right bar) includes 2001–2012.

Extreme precipitation, flooding, and increased temperatures have resulted in damage to roads, bridges, railroads, and other transportation facilities in inland as well as in coastal communities. As the frequency of extreme precipitation events has increased every decade since the 1950s, risks to transportation systems have increased. For instance, flooding in the Midwest during 2008 disrupted freight and rail transportation, negatively impacting businesses and communities that depend on reliable shipments of materials and products. In addition, coastal communities have faced increased costs due to damage from extreme storms and rising sea levels: these events have damaged roads, ports, and other infrastructure. An estimated 60,000 miles of coastal highways are already exposed to periodic coastal storm flooding and wave action exacerbated by rising sea levels.4

Climate scientists project that current trends will result in higher temperatures, increased frequency of severe precipitation events, longer and/or more frequent droughts, increased sea levels, and an increased frequency of strong hurricanes. Some regions may experience temperature increases of 15°Fahrenheit above current conditions—these higher temperatures have the potential to affect transportation and supply chain infrastructure such as roads and railways. Regional changes in precipitation patterns can result in lower and higher water levels, impacting river navigation for waterborne freight as well as roadway crossings of streams and rivers. Increases in sea level for most of the United States may inundate transportation and supply chain infrastructure in the coastal zone. For the Gulf Coast alone, sea level rise may inundate roads, railroads, airports, and seaports, impacting economic activities valued at hundreds of billions of dollars. Damage from sea level rise may be exacerbated by an increase in the frequency of Category 4 and 5 hurricanes.

Individuals, businesses, and government entities can take action to increase the resilience of transportation and supply chains to extreme events. Advance preparation and adaptation can help avoid disruptions and minimize impacts. Better planning for infrastructure and site selection, the use of weather-resistant building materials, increased redundancy of transportation components, and improved post-disruption recovery planning can provide more security for transportation systems and supply chains.

This section is excerpted and abridged from the report Climate Change Impacts in the United States: The Third National Climate Assessment, Chapter 5: Transportation.

To learn more about the impacts of climate change and variability on transportation and supply chains, visit the subtopic pages: