Ecosystems are often most at risk when climate stressors interact with non-climate stressors, such as land-use change, habitat loss, pollution, and invasive species. Restoration of natural systems, increases in the use of green infrastructure, and targeted conservation efforts can help protect people and nature from climate change impacts.

Species in the Midwest are already responding to environmental changes that have occurred over the last several decades, and climate change over the next century is expected to cause or amplify those stresses for many species and ecosystems. 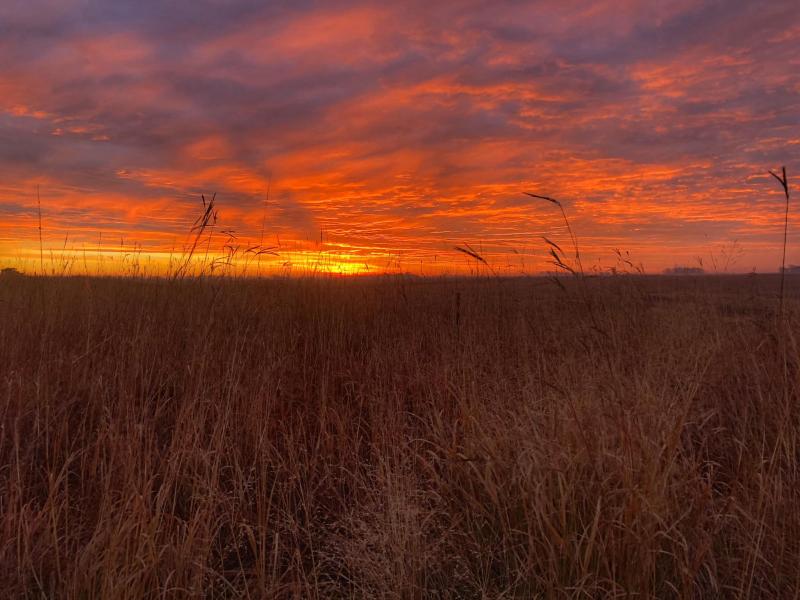 Sunrise over the Morris Wetland Management District in Minnesota.

Regional biodiversity has already been reduced in Midwest prairies, wetlands, forests, and freshwater systems due to land conversion and other stressors. Changing climate factors such as increased air and water temperatures and increasing drought risk will likely accelerate the rate of species decline and extinctions. The loss of species and degradation of ecosystems could potentially reduce or even eliminate ecological services such as flood control, water purification, and crop pollination—reducing the potential for society to successfully adapt to ongoing changes.

The Midwest region supports the world’s largest freshwater ecosystem, the Great Lakes, which are at risk from rising temperatures, changes in seasonal stratification of lake temperatures, and increased summer evaporation rates. These climate stressors, combined with stressors from pollution, nutrient inputs that promote harmful algal blooms, and invasive species, put the Great Lakes at risk. For a more detailed discussion of climate change impacts and adaptation efforts in the Great Lakes, see the Great Lakes regional section of this website.

Changes observed in the Midwest include species range shifts (avoiding exposure to new climatic conditions by shifting location or taking advantage of conditions in new areas), changes in population size (indicating a change in viability in a given place), shifts in body size and growth rates, and changes in the timing of seasonal events (phenology). Local expertise, input from multiple stakeholders, and tools like scenario planning can help improve assessment of vulnerability so that risks can be connected to management actions.

While understory plants in Wisconsin are showing changes in range, they may not be shifting quickly enough to keep up with changes in climate. The panels here represent 78 plant species, showing (a) observed changes in the center of plant species abundances (centroids) from the 1950s to 2000s, (b) the direction and magnitude of changes in climate factors associated with those species, and (c) the lag, or difference, between where the species centroid is now located and where the change in climate factors suggests it should be located in order to keep pace with a changing climate. 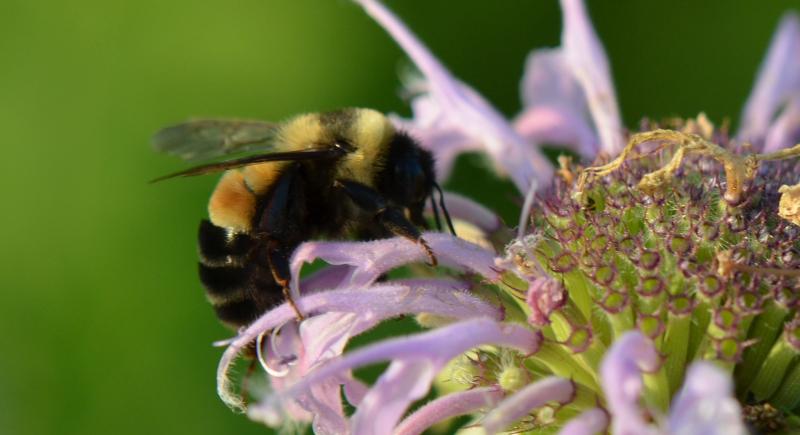 The rusty-patched bumble bee was once an excellent pollinator of wildflowers, cranberries, and other important crops, including plum, apple, alfalfa and onion seed. The species occupied grasslands and tallgrass prairies of the Upper Midwest and Northeast, but as most grasslands and prairies have been lost, degraded, or fragmented by conversion to other uses it is now endangered throughout its range.

Declines in native pollinator species are an important concern in the Midwest, as both native and managed pollinators play vital roles in supporting food production and are critical for supporting wild plant reproduction and ecosystem diversity. Key threats include habitat loss and degradation, pathogens, pesticide use, and invasive species; climate change is likely to act as an added stressor for many species.

Human land use has influenced the structure and function of natural systems of the Midwest. Widespread conversion of natural systems to agriculture has changed much of the region’s water and energy balance. When vegetation has been removed or undergoes a major change, both runoff and flooding tend to increase. As land has been cleared for agriculture and urban and suburban development, conversion to pavement, compaction of soil, and widespread loss of wetlands has reduced the land’s capacity to absorb and store water. The growth of agriculture and loss of wetlands—more than half of the region’s wetlands have been drained—mean that changes to the timing, type (rain or snow), and amount of precipitation are acting on a system that is already highly altered in ways that tend to promote flooding. Climate change modeling suggests that the southern half of the Midwest will likely see increases in saturated soils, which also increase risks to agriculture and property from inundation and flooding.

Understanding both the history of change and how future climate patterns can drive additional changes is useful in identifying meaningful strategies that can help reduce risks to both people and biodiversity through strategically protecting and restoring ecosystems.

Strategies for biodiversity and ecosystem adaptation can be grouped into three categories:

The table lists example adaptation strategies for biodiversity and ecosystems.

In the past few years, the recognition, promotion, and implementation of green or ecosystem-based climate change adaptation solutions have expanded in the Midwest. While the idea of using natural systems to reduce risk and provide benefits to society is not new, efforts to document and quantify benefits, costs, and cost savings of using these types of approaches are increasing. Restoring systems such as wetlands and forested floodplains and implementing agricultural best management strategies that increase vegetative cover (such as cover crops and riparian buffers) can help reduce flooding risks and protect water quality. The important role of nature-based solutions—such as reforestation—for mitigating climate change is also being recognized and quantified.

Adaptation and mitigation strategies that incorporate protection or restoration of natural systems are a “win-win” approach, as they often add habitat and restore ecological and hydrological functions that were reduced as a result of land conversion.