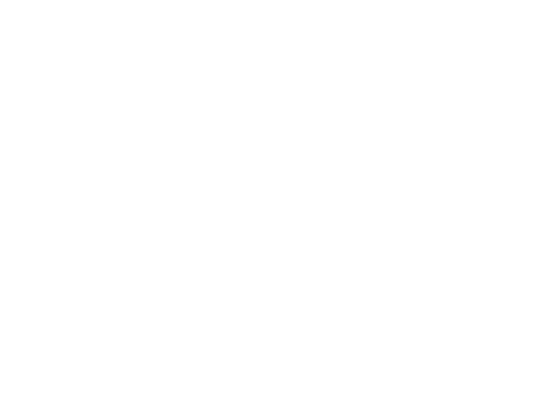 Water in the Northern Great Plains is essential for people, crops and livestock, ecosystems, and the energy industry. Climate projections include regional changes in precipitation patterns, warmer temperatures, and the potential for more extreme precipitation events.

Climate drives extreme fluctuations throughout the five states of the Northern Great Plains. In some cases, evaporation rates exceed 100 percent of precipitation, resulting in a deficit of surface water and more reliance upon groundwater. Cool season moisture—from snowfall and snowpack—is essential for groundwater and aquifer recharge, and those rates are relatively high in the region. 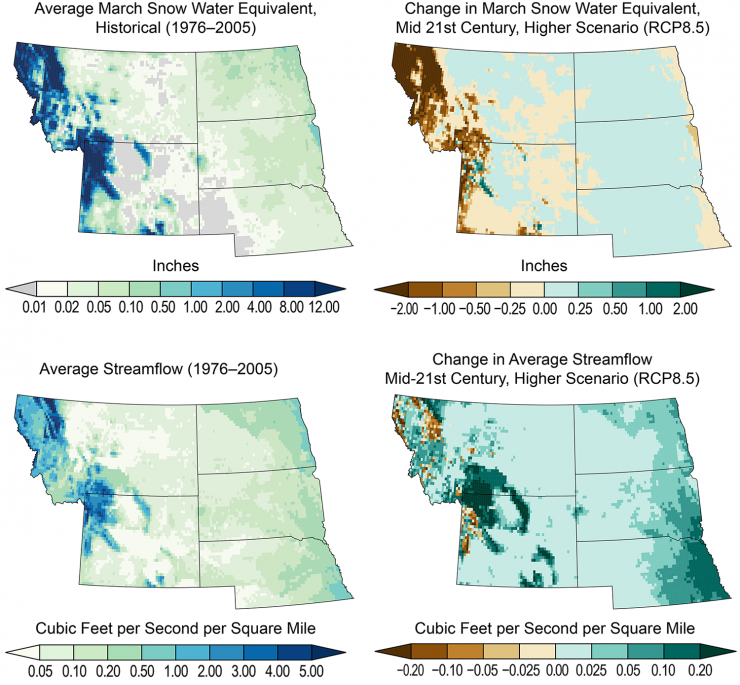 Water management is intricately tied to both flooding and drought throughout the region. Indications point to a shift in peak seasonal runoff for the Upper Missouri Basin based on climate modeling results.1 Shifting peak runoff will cause disruption with energy production, ecosystems, and reservoir and water management. In addition, increased variability in upper Missouri River runoff (above Sioux City) will continue to be a major concern for interests along the river corridor.2

Runoff has become much more volatile since 1970, as dry spates followed by extreme precipitation events have become more common. Major flooding across the Upper Missouri River Basin in 2011, 2018, and 2019 figure prominently in recent memory. Both 2018 and 20193 were record-setting years for precipitation and flooding.4 Flooding began in March 2019 in Nebraska, Iowa, Missouri, and South Dakota and remained relentless throughout the year, setting many precipitation and flood records. 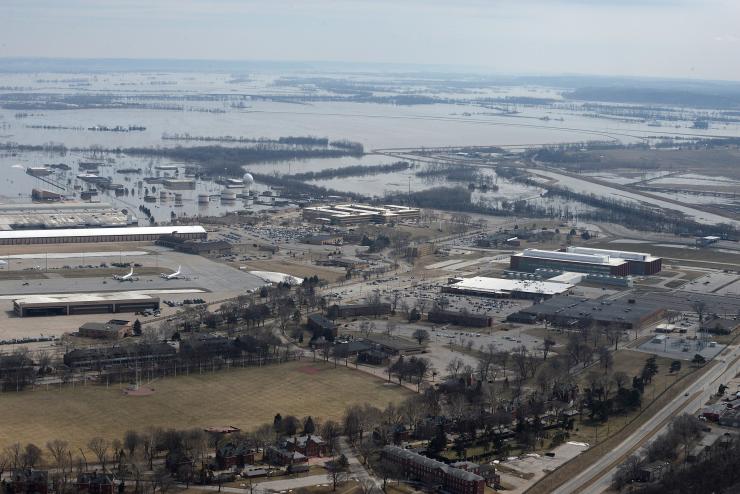 An aerial view of Offutt Air Force Base and the surrounding areas affected by flood waters March 17, 2019. An increase in water levels of surrounding rivers and waterways caused by record-setting snowfall over the winter, in addition to a large drop in air pressure, caused widespread flooding across the state of Nebraska. Click on the image for a larger view and source information.

Flooding in the region is most often caused by spring snowmelt runoff or thunderstorm-driven extreme rainfall. These events, overlaid by a trend of increasing precipitation, have combined to put many existing properties and structures at risk of more frequent or more extreme flooding. Since about 2011, the state of South Dakota has used disaster mitigation funds to support the relocation of six structures to higher elevation or out of a floodplain. During that same time, the state has helped fund the acquisition of 59 structures that were in high flood risk areas. Most of these properties were on lakes in closed basin areas in eastern South Dakota, where the water table has risen and shorelines have migrated in recent decades. 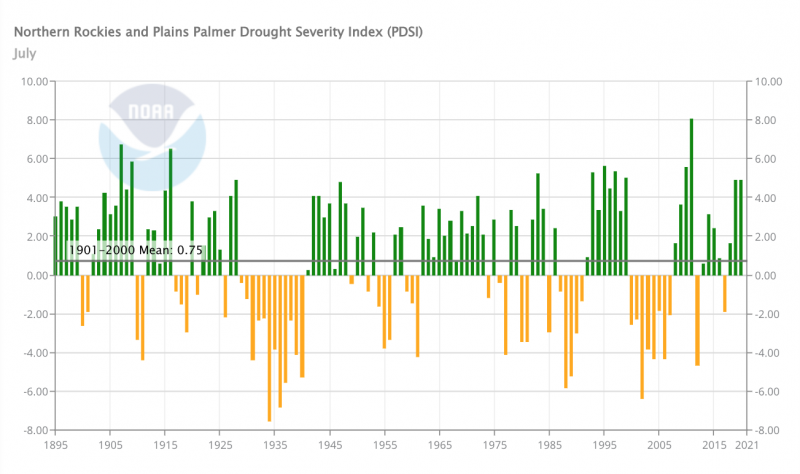 There has been a dearth of monitoring for precipitation, soil moisture, and snow water equivalent (a measure of water stored seasonally in snowpack) at low elevations, leading the U.S. Army Corps of Engineers (USACE) to establish an Upper Missouri River Basin Soil Moisture and Plains Snow and Soil Moisture Monitoring Network (UMRB Monitoring Network). Coverage includes Montana, Wyoming, the Dakotas, and northern Nebraska. The USACE is collaborating with federal and state partners to implement this project following recommendations made in 2013 after a very wet 2011 and a very dry 2012.

When it comes to weather-related events, having the most accurate, up-to-date information is one of the best tools we have to help mitigate potentially devastating consequences.

The rapid evolution of drought in 2012 underscored the need to anticipate drought. In 2017, record low May–July precipitation, warm temperatures, and windy conditions led to rapid soil moisture declines in the upper basin. Neither the drought’s swift onset nor its severity were forecasted. By July 2017, North Dakota, South Dakota, eastern Montana, and the Canadian prairies were experiencing severe to extreme drought, wildfires spanning some 4.8 million acres, livestock losses, and agricultural losses of more than $2.6 million in the U.S. alone. 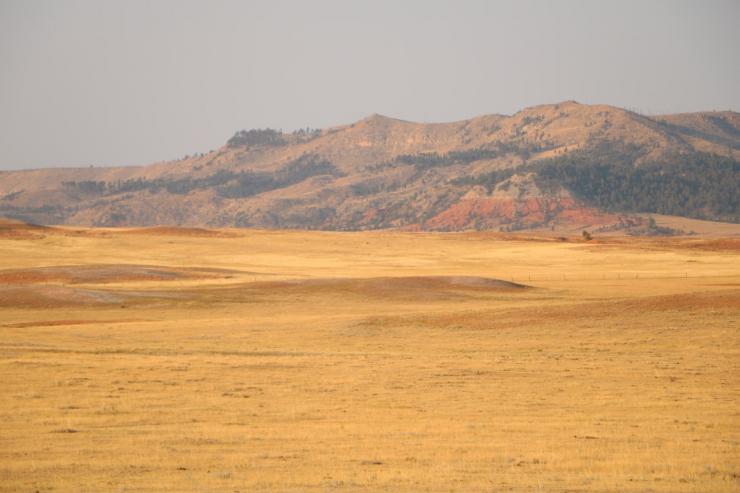 Dry pasture near Custer, South Dakota, in August 2017. Click on the image for a larger view and source information.

The National Integrated Drought Information System (NIDIS) developed a Drought Early Warning System (DEWS) for the Missouri River Basin in 2014. The goal is to improve the regional capacity to respond to and cope with drought by utilizing existing networks of federal, tribal, state, local, and academic partners to make climate and drought information readily available and useful for decision makers.

The floods of 2019 were followed by widespread drought in the latter half of 2020. In December 2020, NIDIS and partners released the Missouri River Basin DEWS Strategic Action Plan, which outlines priority tasks and activities to build drought early warning capacity and resilience. This plan is the second iteration for this region, and builds upon the first plan to include a new focus on enhancing tribal capacity to use drought information and new tools, including drought indicators, across the region (for more information, visit the Northern Great Plains | Indigenous Peoples and the Tribal Nations | Capacity Building pages of this website and the Tribal Engagement page from the U.S. Drought Portal). It considers the needs and gaps that were exposed during the 2017 Northern Plains flash drought, the U.S. Army Corps of Engineers efforts to strengthen soil moisture monitoring in the region, as well as efforts to better understand the needs of tribal nations in the basin.

To learn more about climate-related impacts on water, visit the Water topic.