Across the United States, tens of millions of episodes of foodborne and waterborne illness occur every year,1,2 and more than 3,000 deaths are attributed to contaminated water and food.1,3 Climate change can exacerbate food and water safety risks in a number of ways.  For instance, illnesses from pathogens such as Salmonella and Campylobacter are generally more common when temperatures are higher.4 Rapid snowmelt or extreme rainfall events can cause sporadic increases in streamflow rates; along with changes in water treatment, these increases have been linked to an increase in water-borne pathogens.4 The Great Lakes region is expected to see increased risks of waterborne illness and beach closures as climate change raises lake temperatures and increases 24-hour precipitation totals.4 Climate extremes, especially heavy precipitation and flooding, are also key drivers of food contamination and foodborne disease. Such extremes can change the level of exposure to specific contaminants and chemical residues for crops and livestock. 5,6,7 In the United States, children and the elderly are most vulnerable to serious outcomes from food- and waterborne diseases. 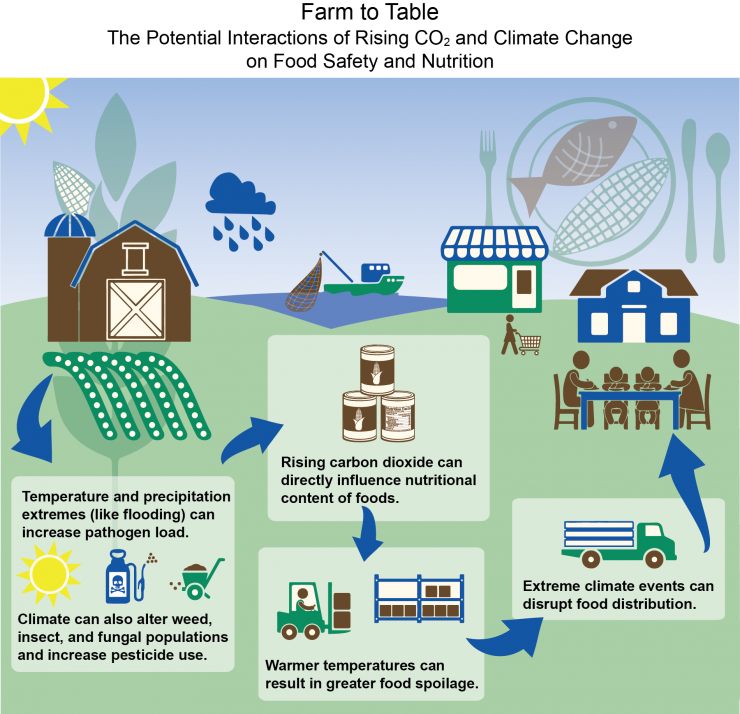 The food system involves a network of interactions with our physical and biological environments as food moves from production to consumption, or from “farm to table.” Rising CO2 and climate change will affect the quality and distribution of food, with subsequent effects on food safety and nutrition.

Exposure to pathogens and toxins occur through drinking, inhaling, or other direct contact with contaminated drinking or recreational water and through consumption of contaminated food, including fish and shellfish. Climate change impacts—including increasing temperatures, precipitation and related runoff, hurricanes, and storm surge—affect the growth, survival, spread, and virulence or toxicity of agents (causes) of water- and food-related illness.8

In addition to influencing infectious diseases, climate change is also expected to threaten the production, quality, and distribution of food. Globally, many crop yields are predicted to decline in the face of changes in rainfall, severe weather events, and increasing competition from weeds and pests. While the United States is less vulnerable to food security threats than some other countries, its food supply could still be affected in several ways:

For more information on this issue, see the Food Resilience topic and subtopics.

Food Access Research Atlas: Climate change is expected to affect the availability and cost of food. The USDA’s Food Access Research Atlas uses measures of supermarket accessibility to provide a spatial overview of food access for low-income and other census tracts, as well as food access data for populations within census tracts. The tool offers interactive mapping, GIS tools, and ability to download local information for community planning.

Virtual Beach: Climate change effects on lake and ocean ecology can result in unsafe conditions for recreation. Virtual Beach, developed by the U.S. Environmental Protection Agency, lets users generate statistical models to predict levels of disease-causing pathogens such as E. coli and enterococci at specific freshwater/saltwater beach sites. Beach managers can use the tool to decide when a beach closing is necessary to protect health, and researchers, students, engineers, and others can use it to study relationships between water quality indicators and ambient environmental conditions.