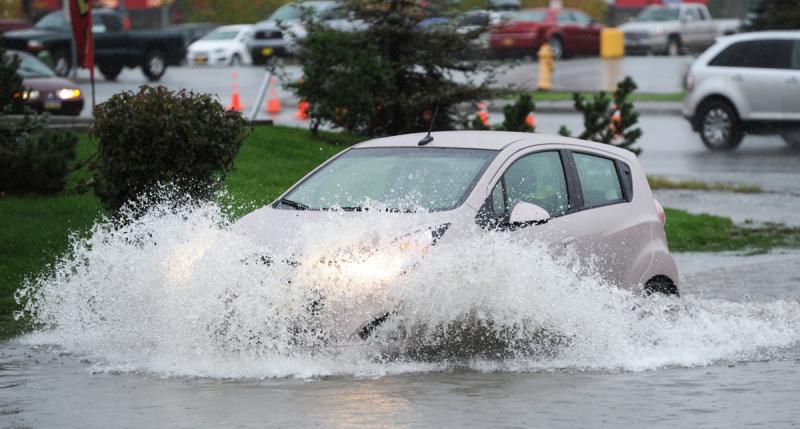 The frequency of precipitation events (rain, snow, sleet, hail) has increased for the nation as a whole, leading to more severe flooding in some regions.1 As the atmosphere warms, its ability to hold water vapor increases, which generates more frequent, severe, and heavy downpours.1 Consequently, even in regions where total precipitation is projected to decline, a greater frequency of extreme precipitation events may intensify flooding.2

The intensity, frequency, and duration of North Atlantic hurricanes, as well as the frequency of the strongest (Category 4 and 5) hurricanes, have all increased since the early 1980s. The relative contributions of human and natural causes to these increases are still uncertain. Hurricane-associated storm intensity and rainfall rates are projected to increase as the climate continues to warm.3 For additional information summarizing research on tropical storms, see the NOAA Research Council's State of the Science Fact Sheet: Atlantic Hurricanes, Climate Variability and Global Warming. Storm surge associated with tropical storms is also projected to increase. Storm surge, the level a wave rises above normal high tide, is the main cause of extreme coastal flooding. As melting ice sheets and warming oceans contribute to sea level rise, the damaging effects of storm surges will likely intensify.3 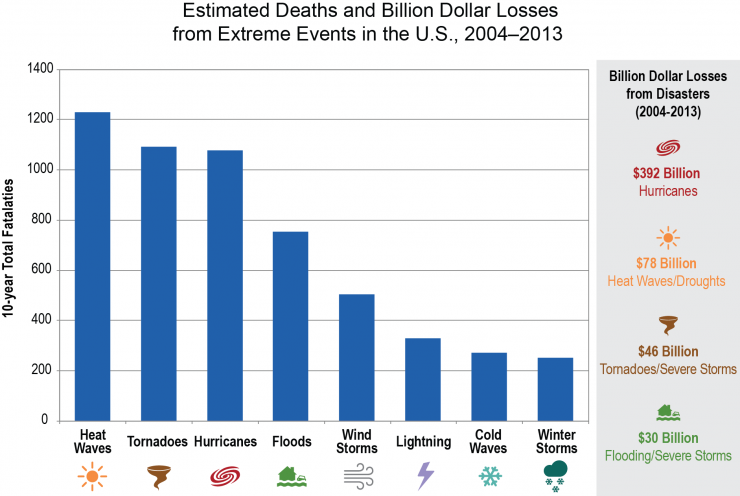 This figure provides 10-year estimates of fatalities related to extreme events from 2004 to 2013, as well as estimated economic damages from 58 weather and climate disaster events with losses exceeding $1 billion. These statistics are indicative of the human and economic costs of extreme weather events over this time period. Climate change will alter the frequency, intensity, and geographic distribution of some of these extremes, which has consequences for exposure to health risks from extreme events. Trends and future projections for some extremes, including tornadoes, lightning, and wind storms, are still uncertain.

In addition to direct health impacts—deaths or injury—from extreme events, health impacts can also occur before or after these events as people prepare for or clean up after impact. Health risks may also arise after an extreme event or in a location different from an impact site as a result of property damage, lost infrastructure, negative environmental impacts, and social and economic impacts, among other factors.4

Floods are among the deadliest of all weather-related hazards in the United States, accounting for approximately 98 deaths per year over the period from 1957–2005—most due to drowning.5 Flash floods and flooding associated with tropical storms cause the highest number of U.S. drowning deaths.5

Extreme precipitation can lead to other health hazards after the event. For example, uncontrolled runoff can overwhelm water and sewage treatment plants and septic fields, contaminating drinking water, food crops, and shellfish. Untreated water and contaminated food can cause gastrointestinal illness from bacteria, viruses, protozoa, and chemicals that are hazardous to human health. Extreme rainfall and rising temperatures can also foster the growth of molds and fungi, particularly in the wake of receding floodwaters, resulting in increasing rates of respiratory illnesses in people exposed to them.5 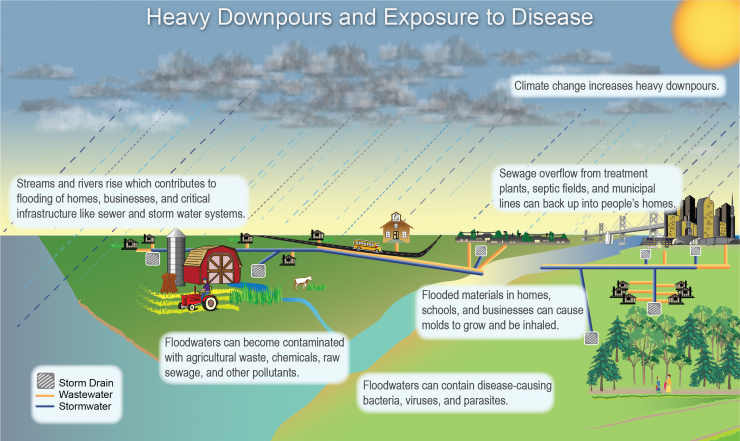 Heavy downpours, which are increasing in the United States, have contributed to increases in heavy flood events. The figure illustrates how people can become exposed to waterborne diseases. Human exposures to waterborne diseases can occur via drinking water as well as recreational waters.

People living in coastal areas are particularly vulnerable to the health effects of severe storms and flooding, as well as compromised fresh water resources.6 The combination of more people living in coastal areas, more intense tropical storms, and sea level rise will significantly increase human health risks in coastal communities.6 Scientists predict that storm surges in areas unaccustomed to facing large hurricanes are likely to cause even greater damage. 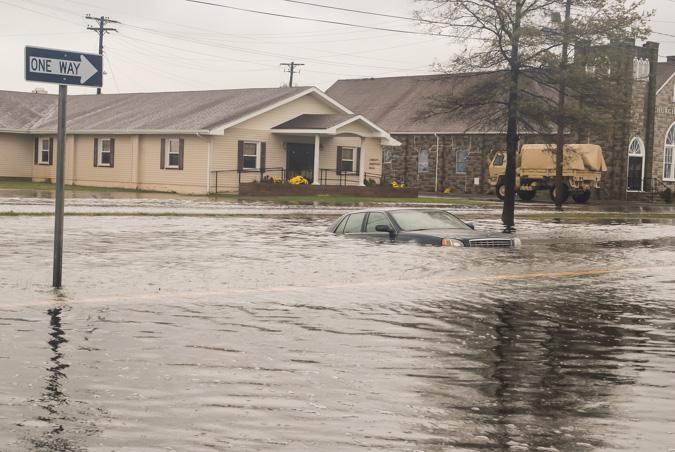 Flooding in Crisfield, Maryland, in the aftermath of Hurricane Sandy.

Preparing for increased storm activity, including more severe and frequent flooding and higher, more far-reaching storm surge, is a key strategy for reducing their toll on human health.

Advanced Hydrologic Prediction Service: The National Weather Service’s AHPS is a web-based suite of forecast products that display the magnitude and uncertainty of occurrence of floods or droughts, from hours to days and months in advance. These graphical products will enable government agencies, private institutions, and individuals to plan for and mitigate the dangers posed by floods and droughts.

FEMA Flood Map Service Center: At this portal, users can type in a ZIP Code to access official FEMA flood maps, as well as other tools for understanding their local flood risk. Additional information for communities is available from FEMA's Risk Mapping, Assessment, and Planning (Risk MAP) Program.

Disaster Behavioral Health Information Series: This site from the Substance Abuse and Mental Health Services Administration provides resources by disaster type such as flood, drought, hurricane, and wildfire. Each installment includes links to items such as plan, tip sheets, fact sheets, organizations, and agencies to help communities prepare for and respond to specific environmental health threats.

SAMHSA Behavioral Health Disaster Response Mobile App: This phone-based application from the Substance Abuse and Mental Health Services Administration gives disaster responders tools to support survivors, including tip sheets, a directory and mapping of area behavioral health service providers, a directory of publications that can be shared through text or email, and other resources for use in the field.