Research demonstrates that both mitigation (efforts to reduce future climate changes) and adaptation (efforts to reduce the vulnerability of society to climate change impacts) are needed in order to minimize the damages from human-caused climate change and to adapt to the pace and magnitude of changes that will occur. There is mounting evidence that risk and vulnerability of indigenous peoples in the United States will increase substantially unless global emissions of heat-trapping gases are greatly reduced. Adaptation and mitigation are closely linked—adaptation efforts may become more difficult or costly if significant mitigation actions are not taken immediately. Therefore, many Tribal Nations are adopting more proactive mitigation responses.

Tribal governments have authority to set policies and adopt their own climate initiatives and energy policies to reduce greenhouse gas emissions. Intertribal groups may also help support mitigation actions on a larger scale. For example, the Fond du Lac Tribe has signed the Kyoto Protocol and the Ogalala Sioux Tribe was the first official tribal member of ICLEI–Local Governments for Sustainability USA.

Some tribes are helping to reduce CO2 emissions from energy end-use and infrastructure by integrating energy-efficient components and systems, including buildings, vehicles, appliances, and electric grid systems. Other tribes are cutting CO2 emissions from energy supply by promoting renewable energy sources, such as wind, solar, and bio­energy. The U.S. Department of Energy (DOE) is providing nationwide funding for a broad range of programs for energy research, development, and demonstration on tribal lands (see DOE Tribal Energy Projects projects by state, year, technology, or project type). 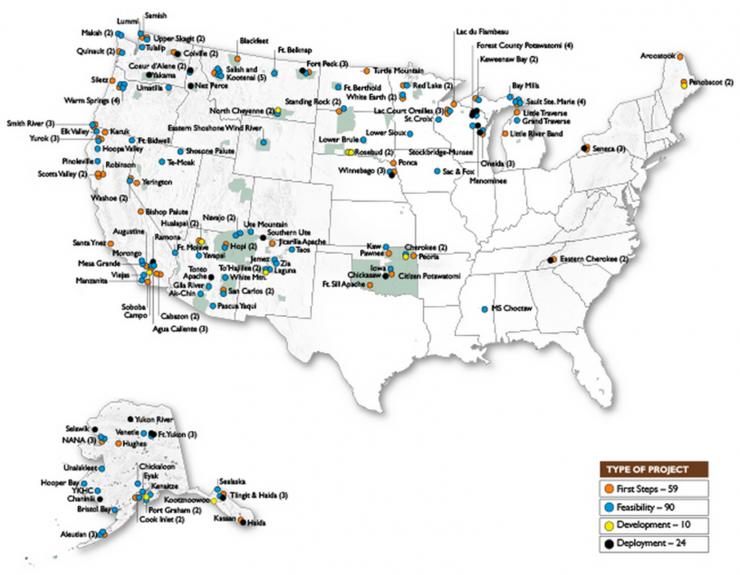 From developing biomass energy projects on the Quinault Indian Nation in Washington and tribal and intertribal wind projects in the Great Plains, to energy-efficiency improvement efforts on the Cherokee Indian Reservation in North Carolina and the sustainable community designs being pursued on the Lakota reservations in the Dakotas, tribes are investigating ways to reduce future climate changes. Click on the image for a larger view, or visit the Tribal Energy Project Maps from the U.S. Department of Energy.

Carbon storage in land ecosystems, especially forests, has offset approximately 17 percent of annual U.S. fossil fuel emissions over the past several decades—but this carbon “sink” may not be sustainable. The persistence of these carbon sinks depends on the relative effects of several interacting factors, including:

Droughts and other disturbances, such as fire and insect infestations, have already converted some U.S. land re­gions from carbon sinks into carbon sources. However, some tribes are actively managing forests by planting trees and protecting existing stands. These forests may serve as carbon reserves for the future, while simultaneously increasing wildlife habitat, providing cover for temperature-sensitive lowland areas (streams and ponds), and enhancing water quality—all of which can have positive effects on ecosystems' stability, diversity, and integrity.

The intersection of mitigation and adaptation strategies

There are various ways in which mitigation efforts and adaptation measures intersect. For example, many adaptation strategies require dedicated land use, such as wildlife corridors or expanded conservation areas. These strategies may preclude using land for carbon-sink mitigation strategies (such as biomass planting)...or they may actually enhance these efforts. These intersections merit further research, as climate impacts affect vegetation, ecosystem productivity, and carbon storage. Forward thinking and comprehensive planning is needed in order for tribes, government agencies, and others to take effective mitigation actions. Tribal Nations must plan ahead to ensure that mitigation and adaptation strategies are complementary in order to build comprehensive community resiliency, while carefully incorporating traditional knowledges (TKs) in these efforts to maximize cultural benefits. For more information on TKs, see the Tribal Nations topic discussion and the Guidelines for Considering Traditional Knowledges in Climate Change Initiatives tool.

The preceding text was excerpted and adapted from the report Climate Change Impacts in the United States: The Third National Climate Assessment (Chapter 27: Mitigation and Chapter 12, Indigenous Peoples, Lands, and Resources).