San Juan Bay Estuary is on the north shore of the main island of Puerto Rico. In the estuary, fresh water from rivers that run off the land mix with waters of the Atlantic Ocean. The estuary—known across the territory as a recreation destination and a positive factor for economic growth—is home to critical tropical habitats such as mangrove forests, coral communities, and seagrass beds.

More than half of Puerto Rico's population resides in the San Juan metropolitan area, and eight urban communities—a total population of almost two and a half million people—surround the estuary’s sensitive habitats. To help maintain and protect the estuary system and its role in the local economy, the U.S. Environmental Protection Agency’s (EPA) National Estuary Program established the San Juan Bay Estuary Program in 1993. The estuary is one of the many tropical areas attempting to balance the economic needs of local populations with resource protection through environmentally sensitive tourism.

Storm surges, higher sea levels, an increase in heavy precipitation, and drought are all causes for concern in the San Juan Bay area. Analyses of Puerto Rico’s long-term tidal gauge records indicate sea level has been rising by at least 1.44 mm/year for several decades—a rate that is expected to continue and possibly accelerate. Sea level rise has already led to coastal flooding and shore loss. Compounding the impacts of rising seas, waters that spill onto land during high tides often pick up contaminants such as oil, trash, and other debris and deposit them in the estuary as the water recedes.

In the face of escalating threats to the estuary, staff at the San Juan Bay Estuary Program began to seek ways to catalog and address threats related to climate change. Javier Laureano, executive director of the program, comments, “All the risks were coming up like popcorn. One there, another there.... We didn’t have the methodology to number all the risks we were confronting with climate change.”

To get a handle on the multitude of threats, leaders and staff of the San Juan Bay Estuary Program decided to partner with the U.S. EPA’s Climate Ready Estuaries program. Using the Climate Ready Estuaries guidebook—Being Prepared for Climate Change—they held community workshops and meetings with stakeholders and walked through the exercises to catalog their vulnerabilities related to climate change as part of a climate change vulnerability assessment process. 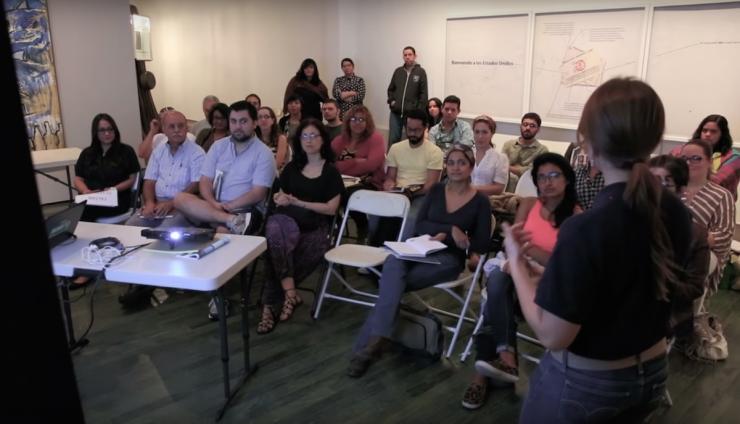 Workshop participants consider a slide presentation to learn about assessing risk. Outcomes from the workshops included lists of climate risks for the San Juan Bay Estuary.

As part of the risk identification stage of this process, workshop attendees were asked to respond to questions such as, “What environmental problems already exist in your community?” and “What impacts caused by climate change would cause major economic loss, social or environmental?” Participants identified 68 risks to the estuary associated with impacts and threats from changes in climate.

Additional workshops, plus correspondence with staff at the EPA and other National Estuary Programs, provided the San Juan staff with support and recommendations throughout this process.

Following the risk identification workshops, staff at the San Juan Bay Estuary Program worked through risk analysis and risk evaluation using the Being Prepared for Climate Change workbook. The risks initially identified were arranged into categories of high-, medium-, and low-impact based on the likelihood, consequences, and time of impact. Of the total identified risks, 28 were flagged as “red risks.” Red risks are those that have the “highest probability of impact and the highest probability of consequences.” 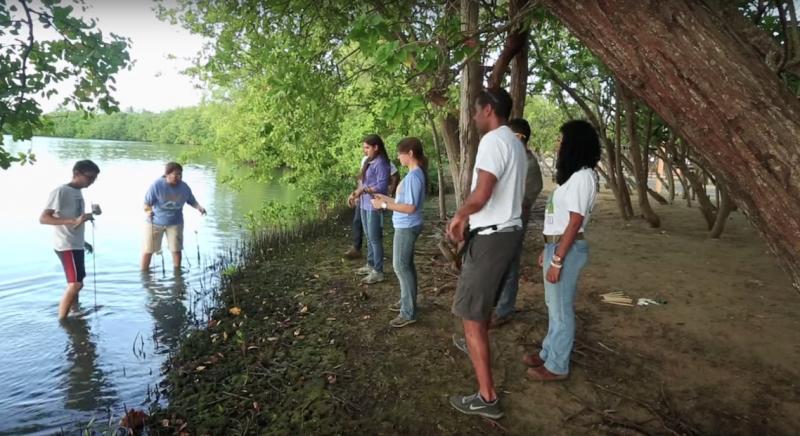 A group of people watch a demonstration in preparation for planting mangrove trees. Mangrove forests can reduce coastal erosion.

After the risks were evaluated, stakeholders used the results to create an action plan—the second phase of the Being Prepared for Climate Change workbook. First, they considered the 28 high priority climate risks and binned them into categories to indicate whether they would be mitigated, transferred, accepted, or avoided. Of the risks to be mitigated, stakeholders considered possible action items and selected the top three actions they judged to have the highest feasibility and potential for reducing risk. The three actions selected are to enhance and restore coastal dunes that had been impacted by extraction of sand and other factors; increase frequency of maintenance for stormwater and sewage collection systems; and initiate an educational campaign to help restaurants properly dispose of used grease and oils.

The San Juan Bay Estuary Program considers their climate action plan to be fluid, and they will continue to monitor and update the plan as climate change presents new risks. In the long term, the group hopes the estuary will be recognized as an important factor contributing to a resilient San Juan.