The soil health management system an Ohio farmer practices increases crop productivity, reduces costs for fertilizer and pesticides, and sequesters carbon in the soil. Both locally and globally, he encourages other farmers to adopt his methods.

Dave Brandt stands in the middle of his central Ohio wheat field on a bright October morning. The grain was harvested months ago, but unlike the neighboring farms that have acres of bare dirt, Brandt’s property is bursting with greenery. Crimson clover, pearl millet, Austrian winter peas, hairy vetch, rye, radish, and other plants—more than 10 varieties—grow in the field.

“This will be here all winter,” Brandt says. “And in the spring, we’ll plant corn right into this.”

His use of these cover crops, along with a practice of not tilling the fields—Brandt hasn’t tilled for more than 40 years—has helped him increase the yield of his crops and reduce the amount of pesticides and fertilizers he needs. 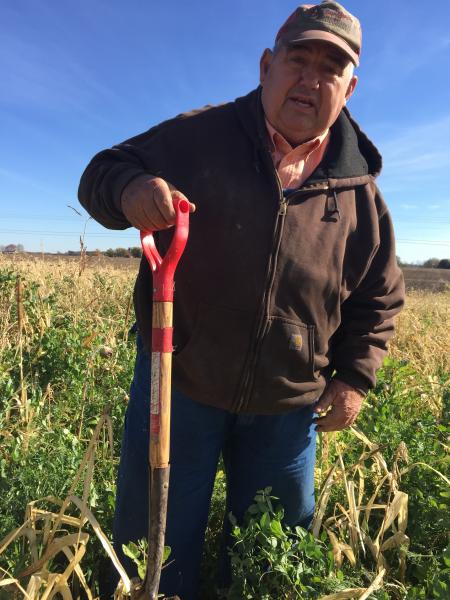 Dave Brandt prepares to show the carbon-rich soil beneath his cover crop.

In his wheat field, Brandt thrusts a shovel into the ground, unearths some plants, and grabs a hunk of soil from the underside. “Look at that. See how fibrous it is?” he says, referring to the fine, hair-like roots that snake their way through the dark clump resting in his weathered palms.

A closer look reveals wiggling earthworms and webs of white filament—fungi that form symbiotic relationships with the plants. Through the process of photosynthesis, the plants absorb carbon dioxide from the air and the fungi feed on it from the plants’ roots. In turn, the plants get nutrients that the fungi absorb from the soil.

Most conventional agricultural practices deplete rather than build up carbon in the soil. When farmers leave their fields bare between crops, for instance, only a small amount of organic matter is left to decompose in the soil and replenish the carbon stocks that are removed by harvesting the crops. In addition, tilling the soil brings any leftover plant material into contact with soil microbes faster than if the plants were to slowly degrade on the surface of the ground, which speeds up the plants’ decomposition and the return of their carbon stores to the atmosphere.

One non-peer reviewed study estimated that total organic carbon in the top foot of Brandt’s soil increased by 10 percent after six years of no-till and cover-crop practices, 35 percent after 20 years, and 61 percent after 35 years. Overall, Brandt’s soil stored, or sequestered, around 960 kg of carbon per hectare per year—roughly equivalent to the carbon emissions that would come from driving a car that gets 20 miles per gallon for 2,200 miles. The same study also compared the productivity of two no-till fields on Brandt’s farm, one with cover crops and one without. The results showed corn yields increased by 36–44 percent with the use of cover crops.

Carbon-rich soils also need fewer fertilizers and pesticides, which saves farmers money. Brandt estimates he uses 75 percent less fertilizer and herbicide on his land (he has eliminated pesticides altogether) and less fuel than if he were employing conventional methods that would require more passes over his fields. “We operate this farm on 2.5 gallons of diesel fuel an acre, compared to 35 gallons an acre for conventional farms,” he says.

Brandt also has observed no soil erosion, and he says that his crops are protected against weather extremes. “Where we cover crop our soils,” he explains, “the soil never gets above 95–98°F in the summer, whereas in [his neighbor’s] conventionally tilled fields, the soil will get to 120–140°F.”

Despite those promising statistics, Brandt has spent decades trying to convince other local farmers to follow his lead, and many still resist. Nationally, no-till is used on about 13 percent of farms and cover crops on just six percent.

Brandt started his no-till practice back in 1972, when he rented his first 600 acres of farmland to grow wheat, corn, and soybeans. Combining no-till farming with the use of cover crops has worked well for Brandt and he has become a champion of sorts for both practices. Brandt has long volunteered with the USDA's National Resources Conservation Service (NRCS), holding soil health workshops on his farm for both farmers and new agency employees. He’s even hosted a foreign dignitary: in July 2015, France’s Agriculture Minister, Stéphane Le Foll, came to Brandt’s farm to see soil carbon sequestration in action.

“He was here for about two hours,” Brandt says, sitting in his office, clicking through some photos of the minister’s visit on his computer. “And he got real excited about what we’re doing.” 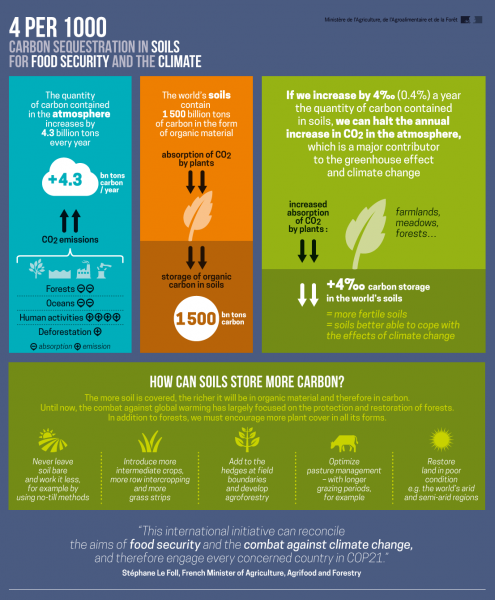 Le Foll was in Ohio to visit Rattan Lal, one of world’s preeminent soil scientists and director of the Carbon Management and Sequestration Center (C-MASC) at The Ohio State University. At Ohio State, Le Foll and Lal discussed the feasibility of a new French initiative called the 4/1000, which calls for increasing the worldwide level of organic carbon in soil by an average of 0.4 percent per year over the next several decades. Such an increase, Le Foll says, would compensate for annual emissions of 4.3 billion tons of carbon dioxide (CO2) into the atmosphere.

Le Foll envisions farmers worldwide doing exactly what Brandt is doing. Their efforts could help reverse climate change while at the same time improving their livelihoods. Soil that is rich in carbon has many benefits to growers: increased water storage in soil, increased length of the growing season, cooling of the ground via evapotranspiration, recharging groundwater aquifers, keeping springs and rivers flowing in the dry season. Soil itself filters water, reduces flooding, and provides a water reserve for plants in times of drought.

For all of these reasons, Lal says, “recarbonizing Earth’s soils would be a truly win-win-win situation.”

Brandt’s soil recarbonizing practices have decreased his costs and increased his yields. But if that's not enough incentive for farmers, there's also the potential that growers could one day make money by storing carbon in their fields.

California has a cap-and-trade program that caps the amount of emissions businesses can emit. The program also gives businesses the opportunity to buy credits if they can’t meet the cap. The money goes to other businesses that prove they are reducing greenhouse gas emissions. Working with the non-profit Environmental Defense Fund (EDF), the state recently developed several programs that help farmers become one of the businesses that can make money by selling emissions credits.

Rice farmers in California, for instance, can chose to implement several methods—dry seeding, early field drainage, and alternate field wetting and drying—that have been scientifically shown to reduce their emissions of methane, a potent greenhouse gas that plays a part in global warming. The state is also working on a program for owners of grasslands who agree to leave them undisturbed, and one for commodities farmers who reduce their fertilizer intake. Fertilizers release the greenhouse gas nitrous oxide, which is the most potent greenhouse gas after carbon dioxide and methane.

California officials have not yet found a way to include farmers like Brandt who employ no-till and cover crops to store carbon in the soil in their programs. The problem, says Robert Parkhurst, director of agriculture greenhouse gas markets at EDF, is that there are a lot of factors that influence how carbon is stored in soil and that makes it difficult to develop a one-size-fits-all program. Different soil types affect how much carbon gets stored, and carbon levels can fluctuate at different depths. Then there's the fact that carbon must be stored in a farmer's soil for about 100 years to make a difference.

“We haven’t really figured out how we can take something like carbon stored in a farmer’s field and commodify it,” says Pankhurst. “You know, turn it into a carbon credit. We support it in concept but we really need to see the science behind it evolve before we can put it into practice. So work like Dr. Lal’s work is fantastic. We really want to encourage him to keep it up.”