The Blue Lake Rancheria is a federally recognized tribal government and community located in Humboldt County, in the northwest coastal region of California. For exceptional work pairing mitigation (greenhouse gas reductions) with adaptation (resilience) in response to climate change, the Tribe was one of 16 U.S. communities selected as a 2015–2016 “Climate Action Champion” by the Obama Administration and the U.S. Department of Energy.

Aerial view of the Blue Lake Rancheria Hotel and Casino with the solar array and the Mad River in the background.

“The Tribe is focused on building low-carbon resilience across the five primary lifeline sectors: energy, water, food, communication/IT, and transportation,” said Jana Ganion, Blue Lake Rancheria’s Sustainability and Government Affairs Director. She points to the Tribe’s latest projects—a community-scale microgrid that serves a six-building campus of the Tribe’s most critical infrastructure, and a facility-scale microgrid at the Tribe’s fuel station and convenience store—as examples of cross-sector lifeline resilience. 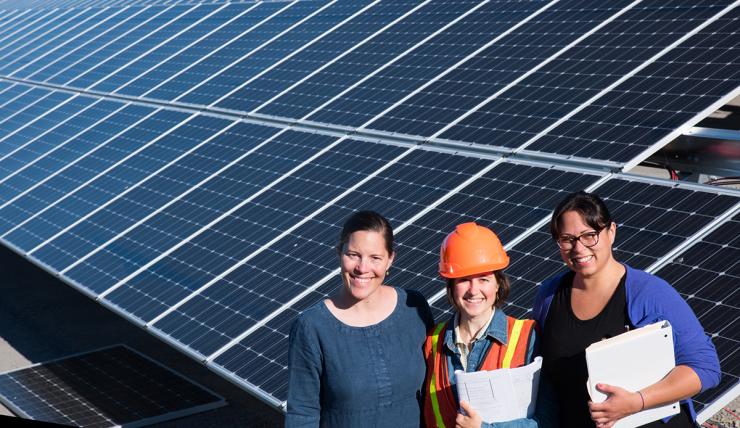 The Tribe began its strategic climate action planning in 2008 and has become a leader in greenhouse gas (GHG) reductions and community resiliency measures. To date, the Tribe has reduced energy consumption by 40 percent from their 2014 baseline, and has committed to further reduce greenhouse gas emissions, reaching zero by 2030. Utilizing a range of approaches—including continual energy-efficiency upgrades, on-site renewable energy and microgrids, and transitioning to green transportation—the Tribe is simultaneously reducing costs and shrinking its carbon footprint.

In partnership with the Schatz Energy Research Center and Pacific Gas and Electric Company (PG&E), and with primary funding from the California Energy Commission Electric Program Investment Charge, the Tribe completed a $6.3 million “low-carbon community microgrid.” Powered by a ~500 kilowatt solar photovoltaic (PV) array paired with one megawatt hour of battery storage, the microgrid is controlled by a central management system and operates in either grid-connected or islanded mode. When islanded—a term describing the status when the regional grid is down—the system generates and uses its own power.

The microgrid supports the Blue Lake Rancheria tribal government offices, economic enterprises (hotel, casino, event center, and two restaurants), supporting infrastructure, and a certified American Red Cross shelter in times of need. “With this microgrid, we have improved resilience across the Rancheria with solar PV plus storage, the most secure, cost-effective forms of energy available to us,” Ganion said. “We started with energy because we need quality power to support the other lifeline sectors.” The microgrid supports water and wastewater systems, food storage and preparation facilities, electric vehicle charging stations and biodiesel manufacturing, and robust communications/IT infrastructure.

In terms of financial results and GHG reductions, the microgrid saves the Tribe ~$200,000 per year in energy costs, and reduces emissions by ~195 metric tons per year. 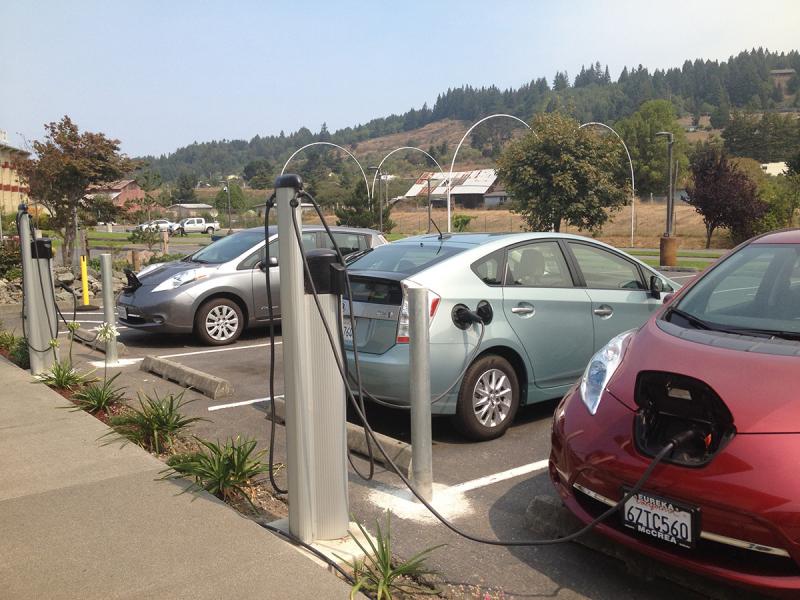 The newer facility-scale microgrid for the Tribe’s fuel station and convenience store complex accomplishes similar resilience across lifeline sectors, again with solar PV power plus battery storage. The project includes 60 kilowatts of solar PV on the fuel station canopy and a ~170-kilowatt-hour battery storage system. “We are creating a replicable resilience package for small commercial buildings, using solar, storage, and advanced building controls. There are ~12,000 fuel station convenience stores in California, and ~154,000 nationwide,” Ganion said. “By implementing a robust, low-carbon, affordable microgrid for these facilities, we can reduce routine operating costs and improve efficiency in business-as-usual situations. And, particularly in rural areas where fuel station/convenience stores represent critical infrastructure, we can ensure long-term back-up power to withstand disasters.” 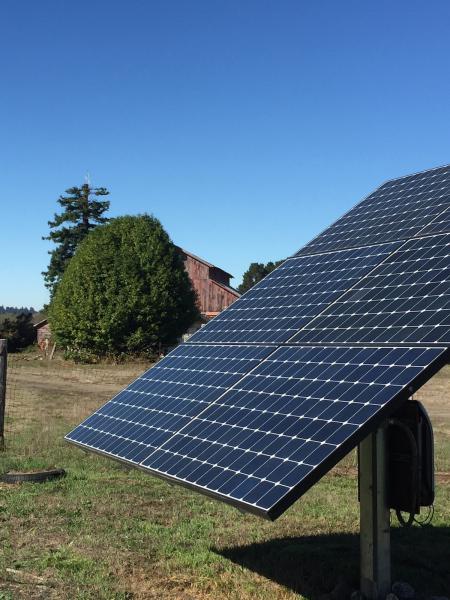 A residential solar array at the Blue Lake Rancheria, installed by volunteers and GRID Alternatives.

At the residential scale, the Tribe has installed solar energy arrays on tribal housing with assistance from the California Single-family Affordable Solar Homes (SASH) program, which provides clean energy sources for low-income families by replacing ~75 percent of the electric need with solar. Project construction was managed by GRID Alternatives, the SASH program manager. “The GRID model has volunteer and workforce training components to foster interest in solar industry jobs,” Ganion said. “Volunteers are trained in solar installation in real time, with hands-on projects. For those interested in a solar job or career, it’s a no-pressure introduction.” 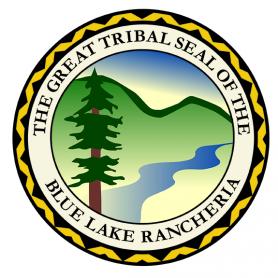 An energy peninsula, the region connects to the larger PG&E grid by a transmission loop (115 kV) that runs through wildfire country and is import-restricted to approximately 70 megawatts. The area is served by a single 10-inch natural gas line, within one of the most dangerous and active seismic zones in the United States. The Cascadia Subduction Zone, Mendocino Fault, Gorda Plate, Pacific Plate, and North American Plate all converge at the "triple junction" directly offshore from the City of Eureka—about 20 miles from the Tribe’s lands. Large earthquakes and/or tsunamis are also a constant threat.

Diesel fuel is expensive in the region; local retail costs are typically among the highest in the lower 48 states. Located "behind the Redwood curtain," landslides and other road impediments can result in diesel supply constrictions. In 2017, the Tribe’s fuel station/convenience store diesel shipments were reduced by 60 percent for over a week due to simultaneous landslides. Diesel expense and supply chain vulnerabilities (in addition to GHG emissions) make diesel generators less reliable sources of local back-up power.

The Blue Lake Rancheria site is one of the only places inland from the Pacific Coast along California Highway 299 (the major arterial between California Highway 101 and U.S. Interstate 5) out of the tsunami zone with critical infrastructure and emergency power to operate for multiple days/weeks. The Tribe’s facilities routinely serve as base camps for firefighters, and "fresh air respite" areas for residents when wildfires occur inland.

Easing pressure on the grid

Using the generation and load control systems and islanding capabilities of the two microgrids on-site, the Tribe can respond with greater resources when demand strains the grid. Future initiatives include working with PG&E to assist with continual demand response on a shorter timeframe (e.g., 15-minute intervals). The Tribe pays strict attention to cyber security, and has worked with the National Renewable Energy Laboratory to implement a secure microgrid network. Distributed, cyber-secure microgrids that can island can help improve resistance to, and impacts from, cyber attacks across the larger grid infrastructure in the U.S.

The Tribe is continually increasing energy efficiency and expanding solar generation and battery storage. The community microgrid will double its battery storage in 2019. The microgrid distribution system will support the smart water grid and the Tribe’s new Resilience Training and Innovation Center facility. The fuel station/convenience store microgrid is designed to expand to include fast (e.g., level 2) EV charging station(s) and potentially super-fast EV charging. The Tribe is also transitioning its public transit fleet to EV, and because its on-site charging stations are powered by the solar-plus-storage microgrid, the EV charging has a small GHG footprint.

By prioritizing its own investments and utilizing various incentives, policies, and programs to help fund and structure these efforts, including the Net Energy Metering Aggregation and Self Generation Incentive Program, ultimately the Tribe will achieve zero net GHG emissions by 2030.

The Tribe’s low-carbon community resilience projects have earned them national and international recognition, including the 2017 U.S. Federal Emergency Management Agency (FEMA) “Whole Community Preparedness Award,” and DistribuTECH/PowerGrid International’s “2018 Distributed Energy Resource Project of the Year.” For bundling energy efficiency, demand response, and distributed generation into energy management solutions that serve the Tribe and the region, the Tribe was recognized by the local utility (PG&E) with its “Integration Award.”

The Tribe maintains a wide array of outreach efforts to support coordination and collaboration in the new low-carbon resilience sector: they have been appointed to the U.S. Department of Energy’s Office of Indian Energy Policy and Programs’ Indian Country Energy and Infrastructure Working Group, the State of California Integrated Climate Adaptation and Resilency Program Technical Advisory Council, and the California AB 617 Community Air Protection Program Consultation Group. Blue Lake Rancheria was also the first tribal government to join the “We Are Still In” initiative to maintain and accelerate progress toward the goals of the Paris Climate Agreement, and is a member of the Green Power Partnership managed by the U.S. Environmental Protection Agency.