Educating local middle-schoolers about emergency preparedness allows the small city of Miami to build climate resilience in an accessible way—and broach the topic of climate change.

Miami is located in a primarily agricultural region. It sits in a relatively low-lying area at the foot of the Ozark Mountains, and is prone to flooding from heavy rainfall events that occur locally, as well as upstream from the city. The area is also frequently affected by drought, winter storms, and severe thunderstorms. City officials have become increasingly concerned about extreme weather events since major flooding occurred in 2007. 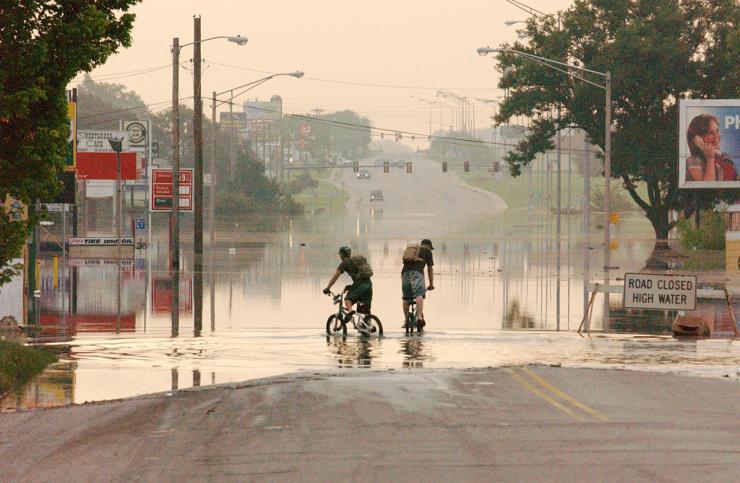 Flooding on Steve Owens Boulevard in 2007.

Like many small communities, the City of Miami faces both budget and staffing constraints, and preparing for extreme weather is sometimes limited by the need to address more pressing or immediate needs. Thanks to the proactive leadership of Glenda Longan, the city’s Emergency Management Director, Miami partnered with Adaptation International, the Southern Climate Impacts Planning Program, and other organizations in a project to explore how community-defined thresholds for extreme events can be used to understand and prepare for future climate changes. The project was funded by NOAA's Sectoral Applications Research Program.

City staff participated in two workshops, through which they identified shared concerns around current extreme weather events and how those events may become more frequent or intense in the future. 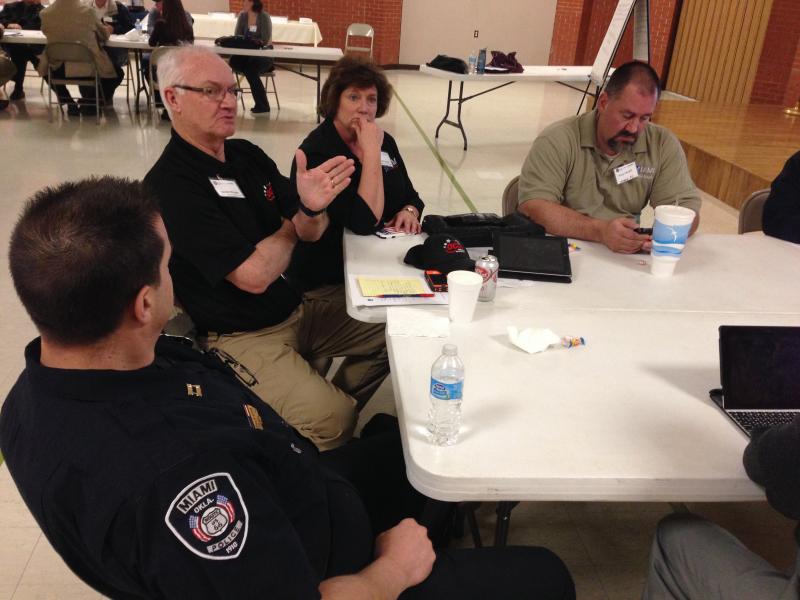 During the second workshop, the NOAA project team presented customized local climate projections based on the thresholds identified in the first workshop. Although the climate modeling couldn’t address projected changes for some of their concerns (such as ice storms or tornadoes), city staff were particularly interested in how flooding risk might change in the future and surprised by the projected increase in extreme heat events—specifically, the tripling of hot days over 95°F from 25 days a year in the recent past to more than 75 days per year by the end of the century.

A curriculum for outreach

After discussing the climate projections, participants brainstormed ideas for an immediately actionable local project to build awareness about the dangers of current weather events, enhance preparedness, and increase resilience to future hazards. The group, led by Longan, decided that the best way to increase extreme weather preparedness and build resilience in the community was to invest in community education around emergency management.

With funds provided by the NOAA project, the city worked closely with the K20 Center at the University of Oklahoma to develop an extreme weather preparedness lesson for all eighth graders. The lesson included:

The city is seeking additional funding with which to provide more weather radios to residents, incentivize the creation of safe rooms, and conduct additional outreach about severe weather events.

For a city that likely had not discussed climate change prior to this project, the approach used by the project team provided an accessible, community-oriented solution that allowed it to move forward and increase resilience within a familiar emergency management framework. Addressing current concerns around extreme weather events in this manner can build resilience without specifically addressing climate change.

Without embracing longer-term thinking around future climate impacts and examining internal city operations, it will be difficult for Miami to reduce community vulnerability beyond emergency response. Investing in community outreach and preparedness is one critical piece of a much larger transformation that cities like Miami will tackle to build resilience in the face of a changing climate.